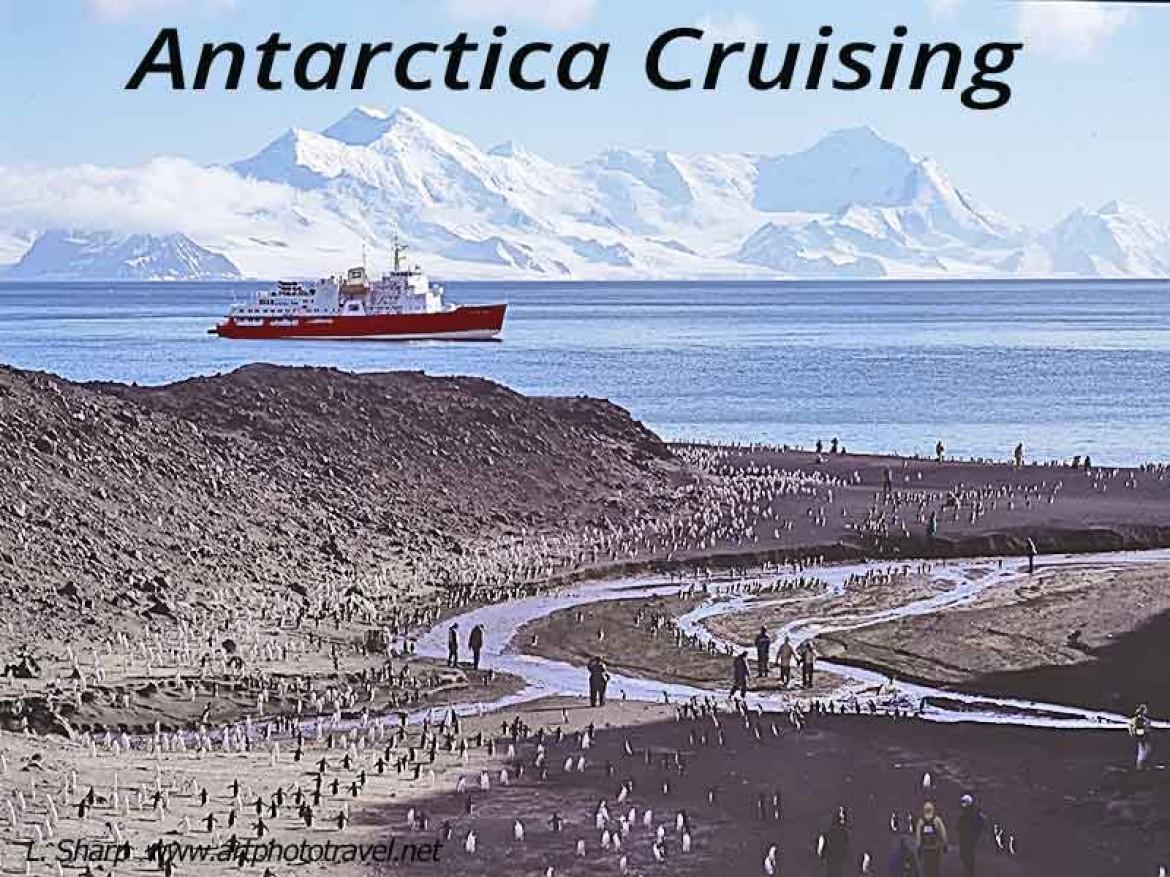 Cruising to Antarctica and the Sub Antarctic Islands

I have travelled once to West Antarctica and the Ross Sea  on board the Frontier Spirit fig1, (now renamed the Bremen) from Hobart, Australia and twice to the Antarctic Peninsula via the Falkland islands and South Georgia from Ushuaia, Argentina on board the Polar star fig2,  when she was a true icebreaker and again after her twin bow screws were removed.

The Highlights of the West Antarctica trip:

♦Macquarie Island for its King penguins, elephant seals and overall primordial feeling.
♦The wild seas of the Roaring Forties
♦The Ross Ice shelf for its sheer magnitude.
♦Breaking sea ice and the large icebergs.
♦Zodiac cruising amongst the ice-floes and wildlife.
♦Cape Adair, for its 2 million penguins, icebergs, and Trans-antarctic mountains.
♦Furthest south possible and 24 hour sunshine.

♦Long journey over rough water to and from the Antarctic continent.

♦Inadequate time on shore, (limited to 4 hours).
♦The passengers split into two groups each having to share time on Macquarie Island.

The Highlights of the Antarctica Peninsula trips:

♦Steeple Jason Island, Falklands for its 100,000 nest albatross colony and spectacular landscape.
♦South Georgia for its history, its huge King penguin colonies and seals, all framed by magnificent glaciated mountains.
♦Paulet Island, for its penguin colony and its icy Antarctic feel.
♦Zodiac cruising amongst the ice-floes and wildlife.

Things I particularly liked about these trips.

♦Extensive time on shore (up to 12 hours/landing).
♦Short journey across the rough seas.
♦Lot of shore landings and large variety of wildlife and scenery.

Factors that influence getting to your destination and the onshore experience.

In 2010 the Antarctic convention was amended to restrict the number of tourists at a given destination to 100, and to prohibit the landing from ships having more than 200 passengers. This implies that passengers will have to share the available shore time for ships with more than 100 berths or the ship will have to limit its passenger numbers to 100 and probably increase the tour cost.
As most landings are performed by Zodiac it is often important to arrive at the destination early in the morning when the seas and wind are low. As most boats come with a fuel allocation for the trip, the tour operator will often have to decide whether to get to the next destination on time to fully utilize his allocated time at the site  using two propellers (and thus more fuel) or arrive a little later using one propeller and save fuel and money.

This may also be a tour issue for the two-three day journey across the violent Drake Passage and the  five-six day journey “at sea” through the Southern Oceans to reach the Antarctic continent.
Antarctica and its sub Antarctic islands can be dangerous places, both from sudden high seas, and violent onshore weather including Katabatic winds. Thus it is best to transfer all passengers “at the same time” from the ship to shore during favourable weather and to be able to transfer all passengers back “quickly ”, if conditions become nasty. This also maximizes shore time.

fig3 zodiacs on the Polar Star

Transfer is by rubber inflatable Zodiacs that can hold 9-12 persons, so for 100 passengers the ship should carry 9 Zodiacs and have 9 Zodiac drivers. Fig3. As loading and unloading each Zodiac takes time, there can be some shuttling from ship to shore reducing the required number.

Expectation and value for money.

The cost and duration of Antarctic cruises vary enormously. If everything is new and all is valued experience then the effective value is total cost/total number of hours. On the other hand if sleeping time, the day of embarking and disembarking etc. and open sea journey time are discounted, then the value per hour for the trip is the total cost/number of interesting hours. E.g. for my 2008 25 day ( 550 hours) Cheeseman’s cruise costing $US13,000 to the Antarctic Peninsula via the Falkland islands and South Georgia the total interesting hours were 235 consisting of 105 hours on land and 120 hours of cruising etc. for a trip value of $US55/hour.

♦Some ships have active stabilizers to control rolling of the ship e.g. the Bremen. However during large seas as can occur crossing the Drake Passage or in the Southern Ocean the stabilizers may need to be withdrawn at the moment they are most needed as the stabilizers can be damaged if they come out of the water.

♦Travel to the Antarctica Peninsula via the Falkland Islands and South Georgia is a good route option as the ship sails with the prevailing winds to South Georgia and is then protected by the Peninsula land mass from the worst weather as it crosses the open passage to Antarctica, see route map Antarctic Peninsula fig4. 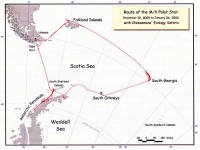