BARGA, PIETRASANTA and the LEANING TOWER of PISA

A narrow street in Barga Italy

Barga from across the bridge

I like medieval towns; particularly those that are small, have atmosphere, are paved in cobblestone, and whose architecture have facades of timber and textured stone. Barga, a tiny fortified hillside village in the forests of Tuscany fitted all these.
In olden times, Barga was an important trading centre and its compact fortified design kept out the marauding Lucca barons. Now after wandering through its narrow cobblestone streets it feels like a picturesque historic village, that has enjoyed far better times. Although it is impressive I would not like to live there with its steep up and down empty streets and shadowed alleyways. 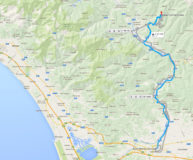 Barga fingers in the face to expel bad spirits 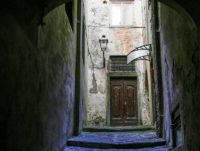 From across the road bridge, the village appears as a cone with its cathedral forming the apex and brightly painted buildings in autumn colours crowding together at its base. In between the buildings wind steep alleyways many with steps, lots of steps. However, there is gentler access through the fortified wall near the top of the hill on the opposite side of the village.
Down a narrow lane, just past the stone face carving into which you are told, to stick fingers in its eyes and nose to expunge evil spirits, was a small, unpretentious restaurant. Had a wonderfully good meal there.

Inside the peloton Pietrasanta Italy

Pietrasanta was another atmospheric small town we were advised to explore. As we walked up its sloping main street to the central Piazza, we found ourselves on the finishing line of a bike competition, surrounded by police cars and motorcycles that precede the bike peloton, and jostled by bystanders who would suddenly jump in front to take a snap or selfie of the bike race leaders. 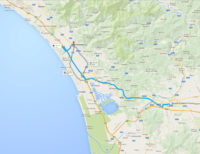 A few more moments later  we were embedded within the bike race itself and surrounded by tens of bicycles and riders and officials, an oozing mass of people that soon completely filled the square.

What a pleasant surprise to find ourselves in the middle of happy chaos.
It was early afternoon when walked down a side street into another husband-wife restaurant and had a wonderfully good meal, even better than at Barga. These meals were as good as any Michelin 2 star Parisian restaurant.
So not only did we savour the wonders of medieval Italian towns but also enjoyed top quality local cuisine.

The leaning tower is part of another impressive walled citadel, but this time we got hassled. Not only from the large number of tourists, but also from aggressive hawkers selling trinkets. While searching for a parking spot, some hawkers hit the vehicle with their hands to simulate my car banging into parked vehicles and then tried to extort money not to phone the police. There was no way I was going to park in their proximity, so we drove all the way back to Lucca and returned to Pisa by bus the following day to see the leaning tower.

The last time we visited Pisa was in the early 1970’s when the number of tourists was far less and tourist amenities and shops were essentially non-existent. Then we felt like explorers stumbling onto an ancient monument, but not this time. Still, the leaning tower and the Domo were impressive sights that have not diminished with time, and their images all the more visually stunning by seeing them in person.
For those who might want to bus to the leaning tower from Lucca, I have included maps and instructions below.
The Viablue bus leaves from inside the Lucca walls on Piazzale Verdi and stops near the Leaning Tower on Via Bonanno on the corner opposite to the Piazza Daniele Manin as you enter the Campo Dei Miracoli through the wall archway. The blue VIABUS returning to Lucca stops on the corner on Via Bonanno on the same side as Piazza Daniele Manin and McDonalds restaurant and the citadel archway. It comes about 10-15 minutes after the hour. The cost of a one-way ticket is 4 Euros. It can be bought at the Lucca ticket office as two one-way fares or it can be paid on the bus.