1) Visit to the Le Petit Trianon- The Domain of Marie Antoinette.

Took the RER from St Michel to the Versailles Rive Gauche. (Note do not get off at Viroflay Rive Gauche which is 2 stops earlier, also the RER ticket is required to get out of the station).
To get to the Chateau of Versailles go out of the front of the station. Sign across street show turn right and then left see red route in Fig1.
We did not go inside the main Chateau as we had previously visited it 3 years ago and would have found it too much to see both the Palace and le Petit Trianon in the one day as they are quite far apart and there is a lot to see. Last time in visiting Versailles we had a ticket to see the state apartments of the kings and queens. This is well worth doing as the group is smaller, the extra rooms including the chapel are very interesting and there are far fewer people. Also our guide was very good. The Palace can be very crowded with long queues for the tickets, so it is advisable to book them in advance. E.g. on line http://billetterie.chateauversailles.fr/online/index.aspx or FNAC or official tourist offices ( see earlier parts).

ii) So as we arrived at the main entrance to the Chateau (in the centre of the courtyard) we asked the attendant “which is the way to the Le Petit Trianon ?”. Go through the iron side gates and through the 2nd grille on the left”. So we walked about 0.5 km down the road, Fig2 red line, found the grill leading to a park. The Trianon was located another 1.5km along a road. Had we instead ignored the attendant’s advice and gone in the opposite direction and walked 150m through the arch on the left and into the gardens behind the Chateau see Fig2 blue line, we could have a) Caught the small road train, b) hired a buggy or c) walked through the enchanting gardens to get to the Petit Trianon.
It reminded me of the brain teaser;  What should the question be to find the direction when approaching an intersection with a signpost with two men, one who cannot tell a lie and the other who cannot tell the truth.
Anyway, the Le Petit Trianon was pretty but it did not have the impact or opulence found in the king and queen apartments in the Chateau itself, or of the rooms of Napoleon III in the Louvre.

We had lunch at Restaurant Le Saint Julian; 6 Rue St Julian,  a small street some 300m on the left before the gates of the Chateau (see Fig1). Food: excellent, ambiance Vgood, stone interior, service: good.

2)Went to an evening recital of the Ava Marias, Amazing Grace and other gospel songs, in St Julien Le Pauvre, St Michel,  a Greek catholic church and one of the oldest churches in Paris. It was magnificent, Fig3. The singer had a beautiful melodic voice and the surroundings were great. The church has evening concerts through the summer and can be booked on line at www.concertinparis.com, or the tickets can be purchased at the church 1 hour before the recitals. Doors open 15 min before the recital, on a first come first choice basis.

i) Went to the L’ Orangerie, to see the large Monet Paintings, Fig4. We were surprised to find a hallway downstairs full of Renoirs, Cezannes, Van Gophs and more Monets.

ii) Went to the Louvre again. The Louvre was changing its entries to allow faster access. It closed all the ticket holders’ entries and opened a special entrance for groups and one for friends of the Louvre (see part1) at the pyramid. The normal queues were very long, but the one for the Friends of the Louvre had no queue. So best check on the situation before visiting. We went to see the opulent apartments of Napoleon III and again the Mona Lisa. It is always crowded, and unbelievably popular. I was trying to get a photograph of the people photographing the Mona Lisa but it was very difficult. Tried to get it by using a telephoto lens from the back of the crowd using a monopod to lift the camera above the heads but the guard did not approve.
iii) Went to le Petit Palais. It is a pleasant establishment with objects of art and paintings including a few Monets and Pissarros, but taken as a whole, it does not compare well with the Louvre (e.g. the apartments of Napoleon III) or the Musea “Dorsay.

Fig7.Picnic on the Pont des Arts 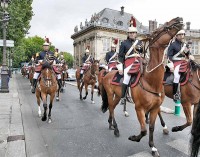 i) It was a beautiful Sunday morning and we walked along the Seine. There were a few runners and some lone walkers Fig6. Later in the day people were picnicking on the Pont St Andre des Arts Fig7, Students were painting the Seine and a troop of mounted Gendarmes appeared in full regalia along the Grand Augustine Quai Fig8, their horses leaving their mark along the road.
ii) Also did the compulsory walk along the Champs Elysees from the Arc de Triomphe to the L’ Obelisque at the Place de La Concorde. Fig9.
ii) The next Sunday walked to the Jardin de Luxemburg, a formal park, with pond and stone walkways, where people stroll or run or have a picnic under the trees. There was a high school band which provided entertainment and set the atmosphere for the park.

iv) Exiting Metro Anvers and walking towards the funicula to Sacre Coeur, we stopped and watched the magicians hypnotize onlookers out of their money Fig10.

v) Went to the Place des Vosges in the Marais, with its passage of long arches and botique side shop Fig11.
vi) And there always was the cafe scene in le Buci Fig12.

Paris is the place to be for the quality of bread, the variety of cheeses and the art of making cakes. So I went to sample the cheeses at this small Fromagerie in Rue St Louis en l’ile 75004 Paris.

I choose one from the window that looked the most interesting Fig13. It was good but I wouldn’t go back to find out its name. Then went to sample the gorgeous looking cakes displayed in the window of Gerard Murot, cnr 76 Rue de Seine, 2 Rue Lobineau, 75006.  They are works of art, Fig14 and taste good.

Had Lunch at the following Restaurants:
i)Ze Kitchen Gallarie, 4 Rue Grand-Augustins 6earr. (Booked 2 days in advance)
Cuisine: Asian fusion.  Food: excellent plus. All my dishes had complex flavours and textures. Portions were  small. I note there have been mixed reviews with this restaurant. I looked at other plates and some did not appeal as much. 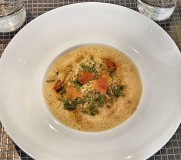 iii) Le Procope Fig18, 13 Rue de l’Ancienne Comedie, 75006, although there is a front entrance off Rue Mazarine. This is purported to be one of the oldest cafes in Paris, opening in 1687, and is in a number of tourist books as the holy grail of Parisian cafes. It should be noted that there are two levels, one downstairs and arranged as a Parisian Bistro with the usual close tables, and upstairs  (“the main restaurant”) arraigned as a spacious and elegant salon, for which reservations should be made in advance. Food: good-Vgood. Ambiance: Vgood.

iv) La Jacobine. 59 rue Saint-Andre-des-Arts, 75006 Paris. This restaurant has a reasonable review in tripadvisor, but our tangine dishes of lamb and mine of duck, were disappointing with the duck tough. Other customer’s dishes seemed better. So Food: average-good. Ambiance: OK, service slow.