Well not quite. Yes, the buildings and monuments were the same, and the ambiance walking the streets felt very Parisian, with the curb site cafes full and food shop windows promoting cakes and cheese and ham as works as art. But there were changes. There were many more people on the street since our last visit 2 years ago, with the metro crowded most of the time. Prices have notably risen with the 2* and 3* restaurants with a set luncheon starting at €150 pp were now well beyond us. further many previous good affordable restaurants had lost their edge, probably victims of their own success. Still we found some excellent local restaurants, Relais Louis 13 was better than before with the chef greeting all his customers and there were new ones popping up all around.

Monets at the Orangerie

And of course, there was the Le Train Bleu, a unique dining experience in itself. One thing that still amazed us was the Parisian fascination with old books, the left bank of the Seine and our area was riddled with used antique book shops, in fact, there was one right next to our apartment block.
And then there were the paintings of the old masters, the Impressionists and the modern expressionists from Monet to Picasso and their followers in such numbers that they became ordinary as you walked along row after row of these masterpieces.

Lunch at the Harvest Festival, Montmatre

We went to Sacre Coeur, the church on the hill overlooking all of Paris under a hazy cloudless blue sky, to find that there was a yearly  harvest festival sporting wine and regional food stalls some presenting bizarre preparations.

Of course, we had to see a Ballet in the Palais Garnier, an amazing building of glitz and grandeur. The Ballet was by Balanchine/Millepied/Robbins, which got great critical reviews but which was not quite to our taste being modern with no story and centered around the group as a whole, contrasting to the Bolshoi ballet we saw here 2 years ago which showcased individual virtuosity. We also saw Madame Butterfly in the Opera Bastille, a modern building of enormous capacity. Perhaps, too large for human opera singers. The voices were superb, and the orchestra very good as well, but it wasn’t clear if the orchestra was in competition as sometimes it dominated the singers.
Oh, I nearly forgot to mention the other monuments, Notre Dame, Eiffel Tower, Arc de Triomphe, Galerie Lafayette, bridges of the Seine, Montmartre, Place des Vosges, etc., etc. 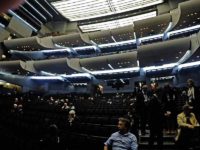