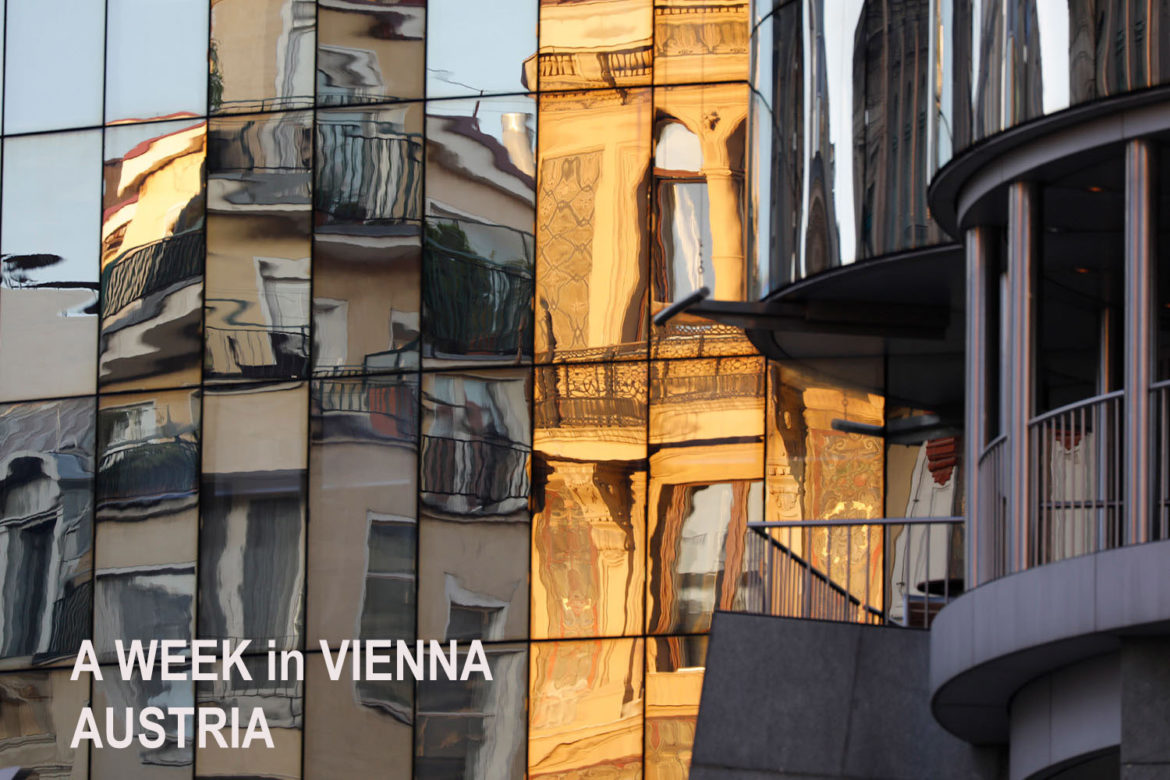 steps to the Albertina ,Vienna

Central Vienna is a vibrant tourist town visited by large numbers of coach and cruise boat groups.
But Vienna is also the place of open-air cafes and tea-shops serving great food and even better pastries, surrounded by ornate historic buildings. It is the place to unashamedly indulge oneself with the feeling of ‘Gemutlichkeit’.
It is also a visual feast of the extreme wealth and privilege enjoyed by the Hapsburg family and their aristocracy of nobles and lords.  All this lifestyle was swept way in the conflagration of the 1st world war, leaving behind their stories  in the paintings and intricate crafted artwork of gold and precious jewels showcased in the various museums dotted around old Vienna.
Most of the old town is a pedestrian way, encompassing the Graben at Stephanplatz with its horse-drawn carriages station in the north, to the centre around the Sacher hotel and Albertina museum located in the south, a 10 to 20 minute walk located within the circular ring road.
It has been over 30 years that we first visited Vienna. We are a lot older now and move at a slower pace than when we were younger. As a consequence, we took the 40-minute tour by horse carriage (80 Euro) to discover the old town and find those places we would later visit on foot.

We stayed at the Hotel Kong von Ungarn, located on Schulestrasse just behind the cathedral of St Stephen and in the same street as the starting point of the horse-drawn carriages. It is on a quiet street yet centrally located for walking the streets of the old town. The hotel boasts that  it is the oldest hotel in Vienna dating back to 1345 and was a favourite place for Hungarian nobles and aristocrats. It still preserves that feeling of history with its decor and stately rooms. By the way, it serves a fine breakfast.
We have our main meal at lunch and searched out good places to eat around midday. These included; the small Hungarian restaurant Elona Stubhel on Brauner lane off the Graben serving beef Goulash, stuffed cabbage rolls and Pike fish with mushrooms, Weibel’s, off Schule Strasser serving good food and great desserts, with thehighlight restaurant being the small opulent Rote Bar inside the Sacher Hotel. It serves traditional courses, and the Bouillabaisse and Beef Roulade were as good as it gets. The deserts were good, but not in the same class. The Sacher hotel has a number of cafes, and we had morning tea here sharing a Kaiserschmarrn (Emperor pancake) with plum and apple sauce-great. 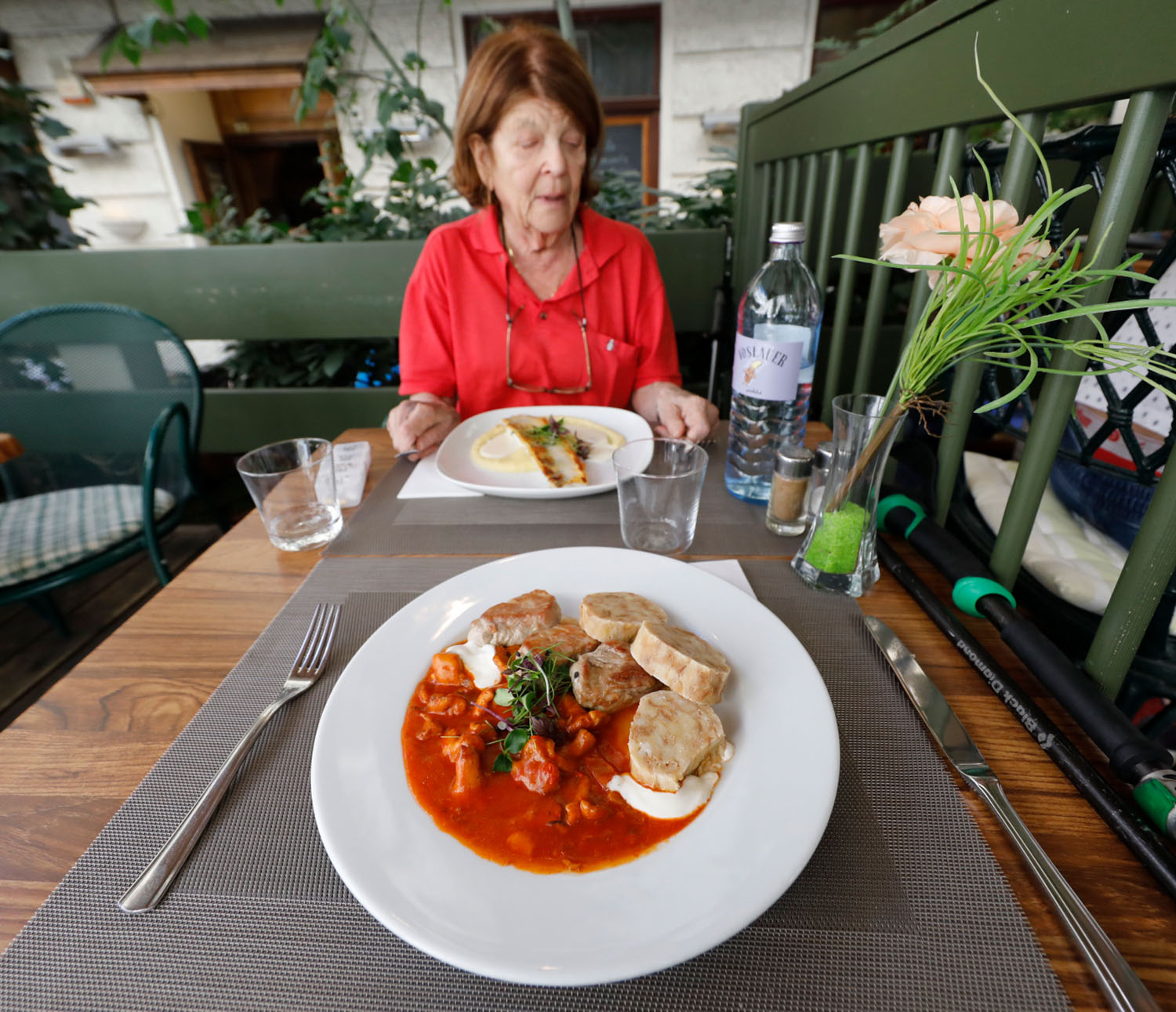 goulash and fish at Weibel.s

Finally, there is Trzeshiewski, on Dorotheergasse 1, a unique sandwich shop serving small portions of open rybread sandwiches with varied and colourful toppings. The main problem is the lack of seating with most clients having to eat standing.
As for visiting the monuments, we toured the Imperial rooms of the Schonbrunn Palace before 10am when the large groups arrive, went around the gardens in a 30-minute horse carriage, (gemutlich) and had lunch at Schonbrunner Stockl – not recommended.
We took an 8 hour private Danube valley tour through the Wachau region, with tours-by-locals (5 star), visiting the ancient town of Krems with its two churches showcaasing great interiors. The first the Frauenkirche of the Piarist order, dating from 1250, perched up the hill and the second, the parish church of St Veit in the town centre.

Then we visited the walled medieval town of Durnstein with its narrow main street and keeping guard over the valley the Burgruine Dürnstein, the castle ruins where Richard the Lionheart was imprisoned on his way back from the crusades. Finally a short one hour cruise on the Danube from Spitz to Melk. ( the boat ride was pleasant but unexciting but it was what we wanted.
We visited the Imperial treasury museum of Vienna, which was an eye-opener into the incredible wealth of the Hapsburgs; displaying the imperial crown, the ornate gold platter and bowl used to wash the hands of the emperor and later used for baptism, the largest cut emerald in the world, gold encrusted swords, and the bejewelled part of the ‘real cross of Christ’, liberated we are told, from the Holy Land. Overall a much better and relaxed experience than our visit of the British crown jewels in the tower of London.

The Albertina museum had a surprisingly good collection of individual paintings from Monet through Picasso and their contemporaries in-between. There is also an exposition of stately rooms.

An interesting and unusual sight was the multicolour apartment block with its sprouting bushes and odd shapes of
the Hundertwasserhaus on Kegelgasse 37-39 designed by Friedensreich Hundertwasser. 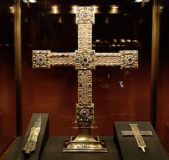 Finally A visit to Stephans Cathedral including a visit by lift to the north tower around 9 am before the arrival of the groups. It is worth getting an audio guide here, as it allows access to the central parts of the cathedral.