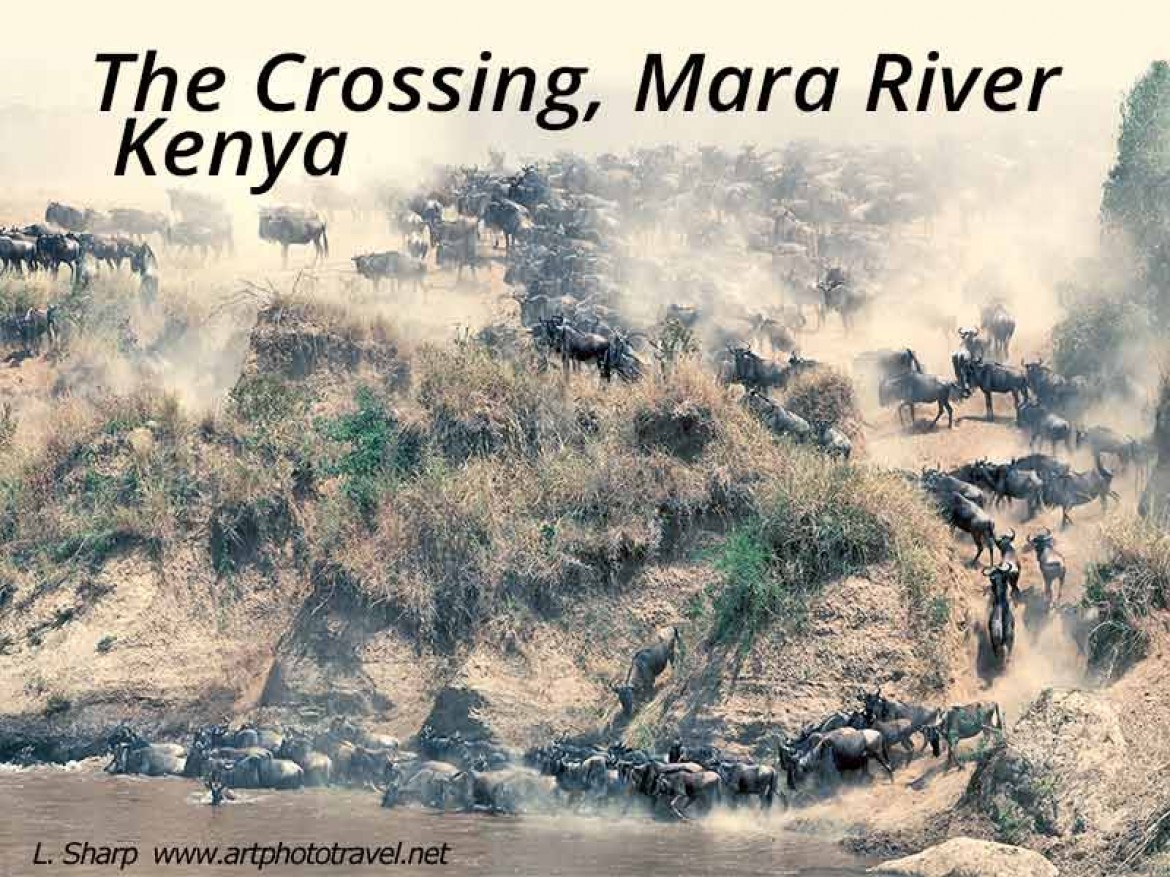 The crossing of the Mara River during the wildebeest migration is one of natures all time spectacular events.
“Nyumbu Anabuka!” crackled through the radio sets. It was the signal all wanted to hear, and with that authority we raced to the vantage point overlooking the steep banks of the Mara River. Unfolding in front of us like a Hollywood blockbuster movie was one of the great spectacles in the world. Hundreds of wildebeest and some zebras were tumbling down the opposite embankment in a cloud of dust and crossing the shallow river in an endless column. In front of them were giant Nile crocodiles inching towards their prey, their nostrils barely visible above the churning water and airborne spray.

It should be emphasized that the crossings are but one part of the great spectacle of the migration across the Masai Mara grasslands. There are so many animals that their number pepper the grassland black in a panorama that stretches as far as the eye can see, fig4. 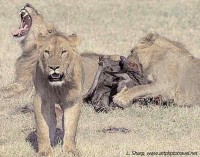 These are good times, not only for the grass feeders but also for the predators. For the grazers, there is danger all around, in the bushes and in the tall grass, and in the hollows of the land where the eternal struggle for survival is reenacted; between lion and wildebeest fig6, between Cheetah and antelope fig12, and between hyena and everything else. And shuffling on the ground just out of reach and infuriating the predators are the scavengers; the ugly looking vultures and their ilk, waiting for an opportunity to feed.

Some Practicalities for viewing the Wildebeest Migration.

Of course, being in the right place is not as easy as the text implies. Timing is everything, but the crossings are in large part unpredictable.
The migration moves into the Maasai Mara in many staggered columns, some kilometres in length, each column approaching the Mara River by their own route and reaching the embankment at different times (see figs7-9b). 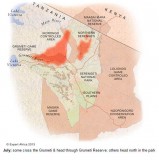 How a given column chooses the point of crossing is not known and to us appears confused. Even when the column is poised to cross, the herd may get spooked and stampede from the embankment, not to return.
Arrive in the Mara a few days early and the Wildebeest will be far from the river.  Come a few days late, and the crocodile -wildebeest interaction will be all but over, as the crocodiles now satiated, will have stored their food under sunken trees and branches for the future (see www.paul-kirui.blogspot.com for updates on the progress of the migration). For each crossing point, most of the drama appears to occur with the initial waves of wildebeest, after which subsequent crossings, although spectacular in themselves, become more subdued and orderly fig10. 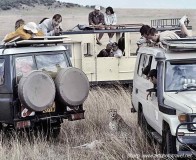 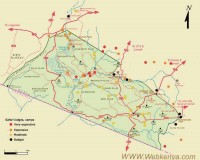 ♦ A major advantage of the Masai Mara over most other African wildlife parks is that, with the right protocols, one can drive a short distance off-road to get a good viewing position.
♦ The Masai Mara safari camps are expensive, particularly during the migration; ranging in price from $500/day per double full board to well over $1000/pp/day (fig11 ), see Masai Mara for a complete list of accommodation.
♦ There are budget safari camps around $100/day, but these are mainly outside the park boundaries (fig 11) and require significant driving time to get to the central areas. As driving in the park is not allowed during darkness this considerably reduces the time  that can be spent  during the peak viewing and photographing time near dawn and dusk, although the crossings can take place any time during the day.
♦ Most lodges provide 2 safari drives per day, in vehicles that take 6-8 patrons. For the viewing the big five game animals and the migration herds on the plains, this is a cost effective way to experience the Mara. However for experiencing the crossings, and in particularly the first crossings this is much less desirable, and a private vehicle is preferred.  This is in part due to the uncertainty of the first crossings which can require long hours of waiting, which often does not fit in with group schedules, and in part due to slowness of fully laden vehicles in the cross country scramble to gain the best vantage points once the rangers give the OK signal. (“The Wildebeest are crossing”).
♦ Most safari lodges can provide exclusive use of a safari jeep, although the cost of $400-550/day is more expensive than is charged in other African game park lodges.

♦ Most off-road places in the Masai Mara can be accessed by two wheel safari passenger vans, but these restrict viewing from the side as the back windows do not open. Most safari passenger vans do have an observation port in the roof, but generally the roof is quite high and it is a squeeze for more than 3 persons,  see fig14.
♦ Another possibility is to book a safari private camp through a safari tour agency.  There are a number of wonderful campsites along the Mara River inside the Masai Mara game reserve fig13. This option comes with your own staff and private vehicle, and for two persons would be competitive with the cheaper established safari lodges when including the private vehicle. I believe one has to book the camps through a safari tour agency as they are required to employ a number of Masai camp staff including night time guards to fend off wild animals coming into the camp.

♦ Note, my top images of the wildebeest crossing the Mara river, and of crocodile-wildebeest interaction, are not shown here, as they are reserved for my book.
♦ An observation port in the top of the vehicle is very useful for photographing the crossing as this provides a wide angle of view.
♦ Bean bags are good for aligning telephoto lenses along the roof of the vehicle.  I also found very useful the L.L Rue Groofin pod camera platform (when used with a monopod support) that attaches to the vehicle door window and allows gimble heads to be attached, providing good camera support and panning.