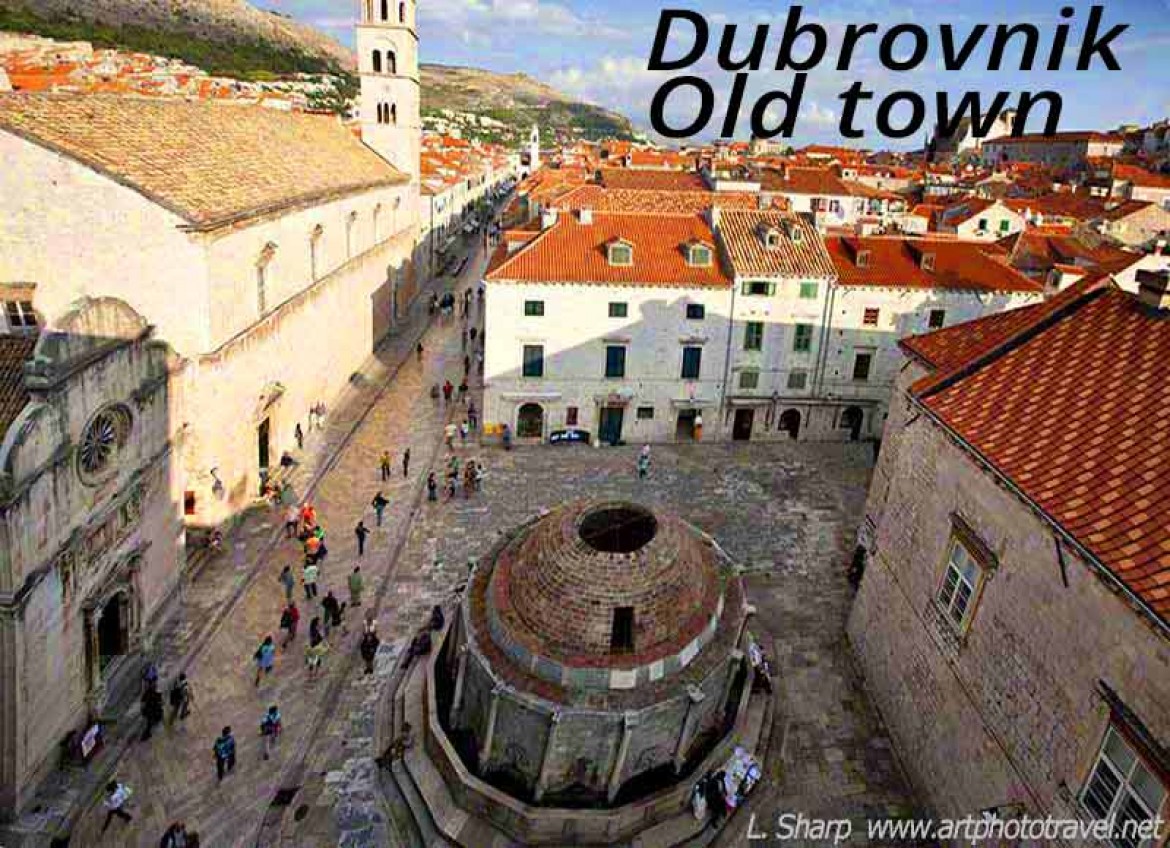 The wonderment and excitement of visiting famous tourist cities of the world was fading, and I thought of other towns that might be different.  A mediaeval walled city perhaps. One that was connected to its history, with narrow winding streets, and quaint, historic houses, where in the half light between day and night one could conjure up visions of times long past. Dubrovnik, a white limestone port town situated on the Adriatic came to mind. It is after all, one of the few remaining examples of an intact mediaeval town enclosed by a great defensive wall. 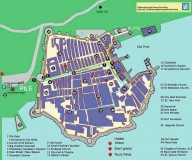 Fig1. Dubrovnik from the air

Looking down from the small charter plane, Dubrovnik certainly looked the part, fig1. There were the narrow winding streets, the higgledy-piggledy red tiled roofs fig4, the baroque cathedral with its majestic dome, the fishing vessels in the small marina, with the sea bottom clearly visible. And flanking all of this and isolating the old town from the rest of the world was a mighty mountain on its northern side, setting its boundaries for ever. From this height, the large number of visitors that crammed the streets during peak times were not detectable, but if we looked carefully at the marina, the character of the town revealed itself, as the boats were predominantly luxury yachts of the glitterati, and the super cruiser anchored just off shore, enhanced the feeling this was not a city living in the past, but a sophisticated town dressed in the apparel of ancient times.
Fortunately, most visitors come by tour bus and cruise ship, so before 9am and after 5pm the town returns to a peaceful ambiance. During the heat of the day, there are the cafes and the small harbour, where one can drink coffee and watch the world go by. Most of Dubrovnik’s residents live outside the wall, but the side streets of the old town with the washing strung across the steep lanes and the toing and froing of local women and old men show this is still a living city, with an authentic heart.

♦The main entrance to the old town is across a stone bridge spanning a dry moat and through the Gothic arches of the Pile Gate.
♦Just outside the gate is the local bus station and the main tourist office.
♦ The Pile gate leads to the Stradun (featured image), a broad central boulevard lined by 17th-century buildings. The Stradun bisects the old town with lanes and many staircases radiating from it on either side, Fig6. At the far end, is a tiny harbour where the majority of the monuments are located, and nearby is a second entrance into the town through the Buza Gate.
♦The best time to photograph the Stradum and the medieval Big Onofrio’s fountain is near sunset from on top of the wall near the gate. Most visitors stay outside the wall and come by bus. But to get the most from a short stay, it is important (and expensive) to stay inside the old town or be but a short walking distance outside.

Fig4. Dubrovnik inlet from the wall

Inside the walled city there a number of rental apartments (see www.dubrovnik-accomodation.com), two hotels, the 3 star Stari Grad, and the  5 star Pucic Palace, and just outside the Pile gate up a small hill, the 5 star Hilton Imperial Dubrovnik.
♦There is a great panoramic view over the old town from the top station of the cable car.
♦Airport buses depart soon after the arrival of Croatia Airlines flights (though any passenger may use them). The bus stops outside the Pile Gate, and then continues to the main bus terminal, 3km away near Jadrolinija harbour. Return buses to the airport start out from this main terminal some two hours before Croatia Airlines departures, stopping en-route at a local bus stop in Petra Kresimira 4 street past the fire station and near the cable car station. (check this and times with tourist office). I think if you have luggage or are anxious, it is best to get a transfer or taxi to the airport (~30 Euros).