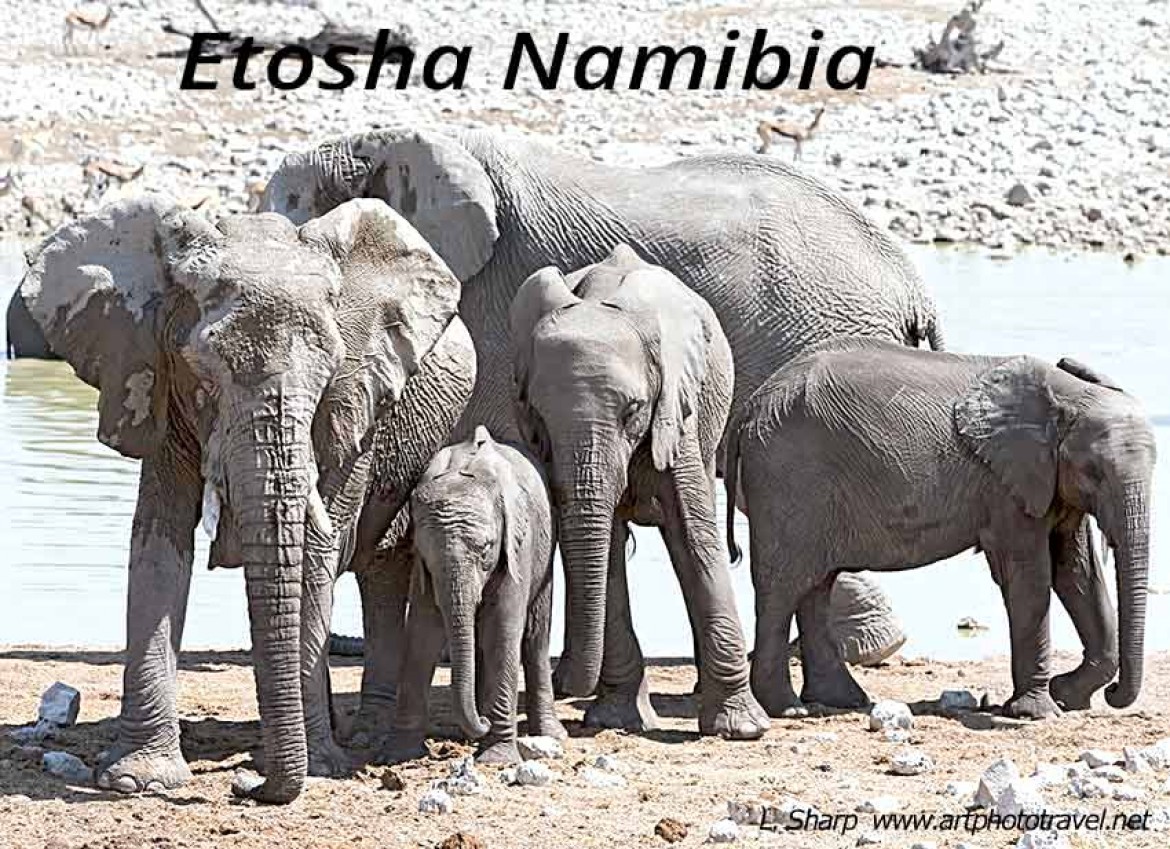 The last decade has witnessed a large increase in visitor accommodation both inside the park and just outside the gates particularly near the Andersson gate. Correspondingly this has led to a large increase in the number of people visiting Etosha, with a corresponding degradation in being able to view game, especially in the eastern part of the reserve. When I visited the park for 10 days in mid-September, it was not uncommon to find 20 vehicles including a double decker bus lined up in rows around the popular waterholes. This concentration of vehicles made it impossible even to see the waterhole from the back positions. The only way to get a front position was to get there first or to stay when all the vehicles departed and wait patiently for the animals to arrive. The great irony, is that although accommodation at the Okaukuejo rest camp has increased by 100 beds to 450, almost all visitors depart early to explore the park. This leaves the waterhole at Okaukuejo virtually unattended, providing unencumbered viewing conditions both day and night for visitors who can view the game on foot and at close range without obstruction fig2. As such, the Okaukuejo waterhole remains a unique premium site. Further, it should be noted that there are a number of luxury one bedroom ( $US115 pp) and two bedroom ($US200 pp) air-conditioned chalets within 12 metres of the stone fence fig1. This allows their occupants to view the waterhole from their verandahs or be able to walk to the wall in a matter of seconds if game appears. So Etosha, or more particularly the waterhole at Okaukuejo remains one of the unique places in the world to view high concentration of game animals including predators and at very modest cost. 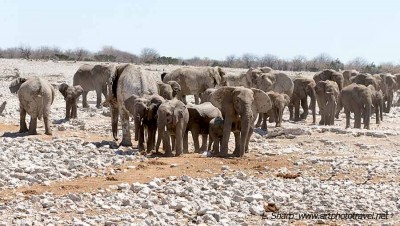 The two major rest camps of Etosha, Okaukuejo and Namutoni are located 435km and 533km north of Windhoek respectively, and are connected to the capital by fast sealed roads. It is one of Africa’s largest parks extending over a 250km from east to west. The park is divided roughly in half, by the large, western sector whose access through the Galton Gate is restricted to visitors with booking at the Namibian Wildlife Reserve’s (NWR) Olifantsrus and Dolomite camps, and the eastern half dominated by the Etosha salt pan with game drive access on its southern flanks, see Etosha map Fig3.
From the International airport, Okaukuejo camp (~480Km ), will take 5-6 hours, mainly on fast roads with 130km/hr speed limit. As an example our plane arrived at Windhoek international airport at 8:40am, we then hired a car at the airport and reached the camp at 4:30 pm with two stops along the way totaling 1 hour. There is a large super market and a number of petrol stations at the small town of Otjiwarongo. The road then splits, the left fork leading to Okaukuejo rest camp  via the Anderrson gate, the right to Namutoi rest camp via the Von Lindequest gate.
Both gates close at sunset and visitors are further confined inside a wire fence that encloses each camp from sunset to sunrise.
Game viewing is restricted to the roads or defined tracks and designated viewing areas at each waterhole. It is not permitted to leave or be outside the vehicle. As such there is no need for a 4WD vehicle and self-touring with a normal car is quite adequate, although an SUV will provide  a higher viewpoint. There is also no access onto the salt pan itself. It is important to have air conditioning as it can get very hot, and there is little cover to shade the vehicle particularly in the peak dry season when most trees have lost significant leaf cover.

The Essence of Etosha.

At the end of the long dry (peak) season in September- October when temperatures are still moderate, the bush is highly stressed from lack of water, forcing game to congregate in large numbers around the waterholes. At this time, there is very little grass, and most trees and bushes have shed their leaf cover, providing excellent game viewing conditions. Also, the dry conditions result in fine dust particles remaining airborne producing dramatic lighting conditions, especially at sunrise and sunset. Etosha has abundant elephants, lions, hyenas, some rhino, a few leopard and many different types of plains animals.
The disadvantage of Etosha is that off-road driving for the visitor is not permitted, and more recently the large increase in visitors around the popular and easily accessible waterholes severely restricts viewing opportunities.

fig7 Ostriches and chicks at Ondongab

rhino at Okaukuejo waterhole at night

♦ There are five rest camps, Okaukuejo, Halali, Namutoni, all with illuminated waterholes in the eastern sector; Olifantsrus a 10 tent campsite and the Dolomite bush chalet camp in the Western sector, and the 15 unit  safari style camp, Onkoshi overlooking the eastern salt pan.
♦ For me Okaukuejo is the favourite camp and the best location to use as a home base. I have visited Etosha 3 times for a total stay of 5 weeks.
♦ Okaukuejo rest camp has a magnificent night time illuminated waterhole in close proximity to the accommodation. On one evening , I saw 22 elephants in the water, 3 giraffe, a rhino and her cub, a female lion and many plains animals all drinking at the same time.
♦ The gates shut at sunset, but Okaukuejo  advised me to be at the camp by 1700 when the admission desk shuts. At the Anderrson gate I had to register the number of days that will be  spent inside the park and then had to pay the park fees showing the registration form at the Okaukuejo admissions desk.
♦ As a fall back to not arriving in time at the camp, I saw many road signs from 20km outside the Anderrson gate advertising various style of accommodation.
♦ I have seen lion hunting a number of time at the Okaukuejo, Okondeka, Nebrowni and Aus waterholes during the day, although it probably occurs at most waterholes.
♦ At the Okaukuejo waterhole visitors and wild animals are separated by a low waist high stone wall on the visitor side and by the land on the game side being lower by some metres. It is thus possible to stand at the wall and view the waterhole and the game without obstruction. In fact on one occasion a large bull elephant came right up to the wall with its trunk over the wall and I had to step back. You can’t get any closer than that. 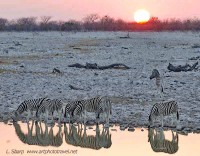 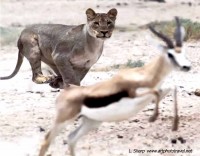 ♦ There is a range of accommodation from camping to 4 bedroom self-catering chalets. Compared to other safari camps the accommodation is very reasonably priced, and therefore highly sought after. Most accommodation is booked en block well in advance by the travel companies so it is essential to book when it first becomes available one year ahead.
♦ Booking can be done on the telephone directly through the Namibian Wildlife Resorts Windhoek,www.nwr.com.na,  Tel: +264 (61) 2857200 3 Fax: +264 (61) 224 900, email: reservations@nrw.com.na and online NWR reservations
♦ Okaukuejo has a reasonable buffet restaurant, a small lunchtime bar for burgers, a petrol station, a small curio shop with maps, and a small basic food store with water  frozen food and snacks.
♦ The Okaukuejo gates leading out of the rest camp are opened just after sunrise, and are shut around sunset. There can be long queues of cars waiting at the gates  before they are opened.

♦ Etosha can provide exquisite photographic wildlife images. The restrictions on access and the large number of visitors just reduces the probability or makes it more difficult to capture the moment. Patience and long telephoto lenses of 400mm, 500mm with extenders are useful.
♦ My favorite waterholes  for photographing game apart from the waterhole at Okaukuejo itself (not in order) were:
Olifantsbad and Aus for elephant herds, some lions gemsbok, zebra: Gaseb and Gemsbokvlate for elephants covered in dust and a few rhino: Kalkheuwel, for closeness to the game, lions a few leopard, small birds and plains animals: Okendeka for view over the salt plains, lions, giraffe, ostrich, and plains animals.  Okerfontien has a different viewpoint as you look down towards the small spring on the edge of the pan.