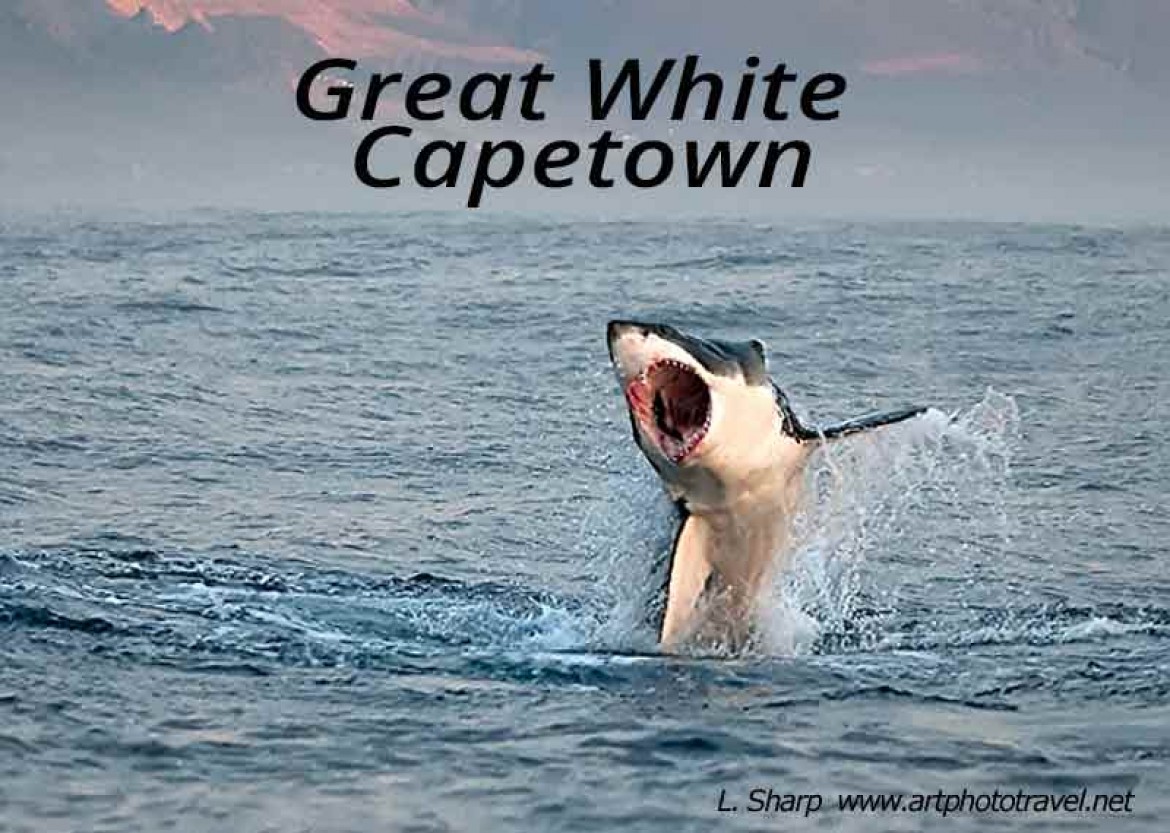 There is little to prepare oneself for the dramatic spectacle of a great white exploding out of the water 20m away. Blink and you will miss it. Experience it, and it will be burned into your memory forever.
Breaching can be seen around the seal colony on Seal Island near Capetown between May and August with peak occurrence in June-July.

Seal Island, fig1 is located on False Bay, fig2 some 12 miles from the naval port at Simon’s Town near Capetown. It is a small rocky island of 800m length and is the home to some 60,000 Cape fur seals. The seas around the island provide ideal hunting conditions. The turbidity of the water and the dark sloping rock bottom provides perfect concealment for the shark as it vertically attacks the seals silhouetted on the surface. The speed of the ambush can be with such ferocity that the shark will come completely out of the water.
There are four  tour operators:
African Shark Ecotours http://www.ultimate-animals.com
Apex Shark Expeditions http://www.apexpredators.com.
White Shark Adventures http://www.whitesharkadventures.co.za/
Shark Explorershttp://http://www.sharkexplorers.com/

All are located in Simon’s Town and depart Simon’s Town wharf before dawn. African Shark Ecotours and Apex Shark Expeditions have operated for many years and limit the number of passengers to 12.  Shark Explorers (12 passenger limit) and White Shark Adventure are more recent operators.  White Shark Adventure’s boat Nemo, is licensed for 20 passengers, but their webpage is unclear on the maximum number of passengers taken per trip. 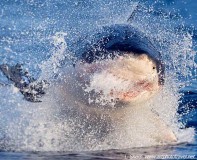 A typical morning schedule is to leave around 6:45 am for the 40 minute ride to Seal Island arriving just before dawn. Then an hour or so is used to search for natural predation when the sharks feed directly on returning seals, fig3. The diving cage which is lashed onto the stern of the boat is then pushed into the sea and anchored at a convenient location to provide room and viewing access for the passengers.  A foam seal decoy is then trawled 20m behind the boat to entice the shark to attack. If  a breach occurs then the trawling will cease so as not to habituate the sharks to the decoy. If there is no attack after 40-60 min the trawling is abandoned for the day, and the diving cage is recovered and lashed to the side of the boat for cage viewing. The sharks are attracted to the boat by pieces of fish cast into the water on a hand-line.  Finally the boat makes a few passes of Seal Island before returning to Simon’s town between noon and 1pm. African Shark Ecotours and Apex Shark Expeditions  have  afternoon cage viewing near Seal Island but I have not been on these trips.
There was a strange occurrence I should report. On the way back to Simon’s town, we encountered three 3 metre great whites which circled the boat. Each came close and partly surfaced, coming to a near stop before slowly turning away and repeating the maneuver for some 15 minutes. Was this an invitation for us to go and swim with them? 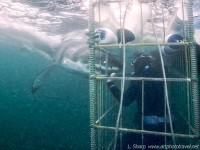 Great white shark at the cage

♦ Simon’s town has a federation feel to the main street, fig6 with many period buildings from the early 1900’s. There is various accommodation and there is a good hotel ( Quayside hotel) overlooking  the departure wharf, fig7. There are also a number of acceptable restaurants close by.
♦ Getting to Simon’s town from the Capetown airport is by car transfer and takes 50min. The transfer can be arranged by the tour operators or there is a booking desk at the airport. One can also rent a car from the airport, which I found to be easy and convenient.

♦ It can be very cold on the boat on the trip out to Seal Island. Take warm clothing, gloves, scarf, hat,  jacket.
♦ The sharks breach without any warning whatsoever. So during the 40 minutes of trawling it is important not to lose concentration or fiddle unnecessarily with the camera, as if breaching occurs at this time most of the action will be missed. If you want that great photograph, don’t even blink.
♦ Photographing natural predation requires 1250-1600+ ASA, minimum 1/800 sec and at least a 200mm or 300m lens. The boat will be moving at high speed if there is a sighting. Close sightings of natural predation are not common.
♦ Photographing the breaching  requires a 70-200mm lens 1/1000 sec, focused slightly closer than the seal decoy.
♦ Note my top images of breaching sharks are not shown as they are reserved for my book.
♦ Sharks are present during the winter from May through August, with the peak season being June- July. Around the end of July the storm fronts intensify, churning the water making it more turbid and the water temperature falls. For an 8 day trip, 3 days may be cancelled due to unfavourable seas in the bay.