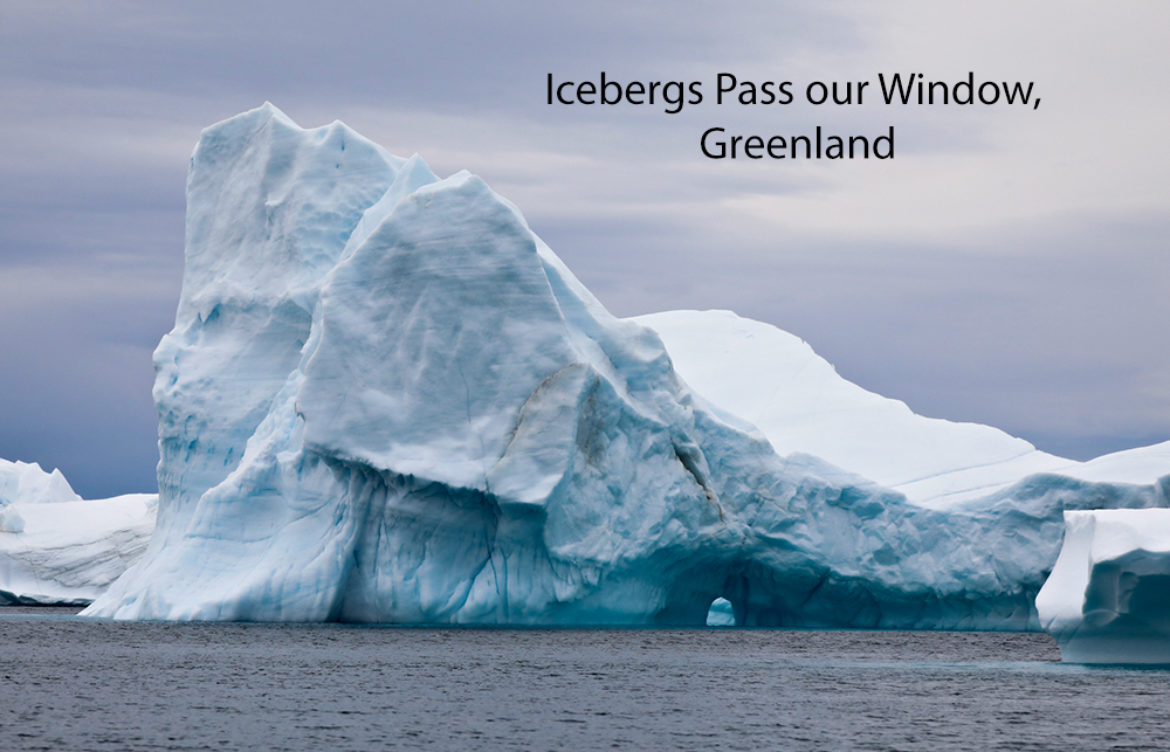 Greenland, or more poignantly, the icefield of Greenland is a must-do place to visit, in part due to the accessibility to the second largest icefield in the world at Kangerlussuaq and the active calving of the Jabobshvns glacier (retreating at over 1Km/year)  at Ilulissat, all located within the Arctic circle.

At the moment we are staying at Ilulissat, looking out of our hotel room window watching icebergs go pass.

Straight in front the visibility is so good that a peninsula of land some 140km away is clearly visible.
On the left is the town of Ilulissat with its brightly coloured painted wood houses framed by large icebergs that have calved from the Jakobshavns glacier, floated down the length of the 40km icefjord and are now clustered together as they bottom on the shallow seabed at the entrance to Disko Bay.

Inside Illulissat, the town has a more practical  persona being  designed for the cold winter, rather  than the romantic view presented at a distance .
On the right are two cruise ships,  the AIDA Cara capable of carrying 1000 passengers, and Silver Cloud with 300 passengers.
Cruise ships are big business during the summer months here, and the whole tourist industry is centred around them. When the ships are in town they dominate the activities and tours, so for individuals, it might be prudent to book well in advance.

the beginning of the greenland icefield Kangerlussuaq

walking up to the greenland icefield
Kangerlussuaq 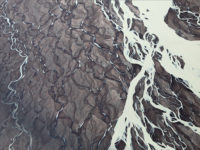 Kangerlussuaq is structured around a former American air base and is the central hub for Air Greenland with connecting flights to Europe. It has a large hotel and cafeteria that is part of the airport. The hotel facilities are basic yet expensive.
Tours are available ;

To the Russel glacier with its 70m high wall where one can get very close, the guide warning us not to go on the rocks as the glacier wall can calve and fall on you with little notice.
To the icefield where one can walk or stay overnight or longer on the icefield itself,
and there is a wildlife tour, now called the tundra tour where the guide advised, ” if it is a rock that moves, it must be a musk ox”.

The other highlight is a flyover of the icefield, with the 5 seater twin engine plane operated by AirZafari, flying down the river with its braided riverlets and quicksand, over the icefield, and back over the Russell glacier.  A must-do activity, particularly if the weather is good and there is sun.

Illulissat has an entirely different feel. Situated on a peninsula jutting out onto Disko bay with  icebergs floating past, it presents a world class view from the position of hotel Arctic.

So what are the must-do activities?
For us,
i) a small plane flight with AirZafari, up the icefjord over the the Sermeq and Jabobshvns glaciers, onto the Greenland Icefield and over its vast expanse of crumpled ice extending as far as the horizon and beyond, around the blue melt ponds, which in their extreme state, empty through cracks in the ice and lubricate the icefield so it moves faster than expected, and back around the icebergs clustered at the entrance to Disko Bay.
Expensive: Very; but a once in lifetime experience.

ii) a 4-hour whale watching tour that went into the icefield around the entrance to Disko Bay. We found solitary humpback whales cruising close to the icebergs with one actually turning towards us and diving under our boat.

There was also a dramatic calving, when a slab from the side of a large iceberg detached  into the water producing a significant tsunami, that came hurtling toward our boat.  This prompted the captain to turn and run at maximum speed from the oncoming wave.  Quite an experience.

Finally a note on the weather. The west coast of Greenland around  Illulissat and Kangerlussuaq have historically had some 300 sunny days per year, but the local people have told us that 2018 has seen wetter and colder weather with many more overcast skies.