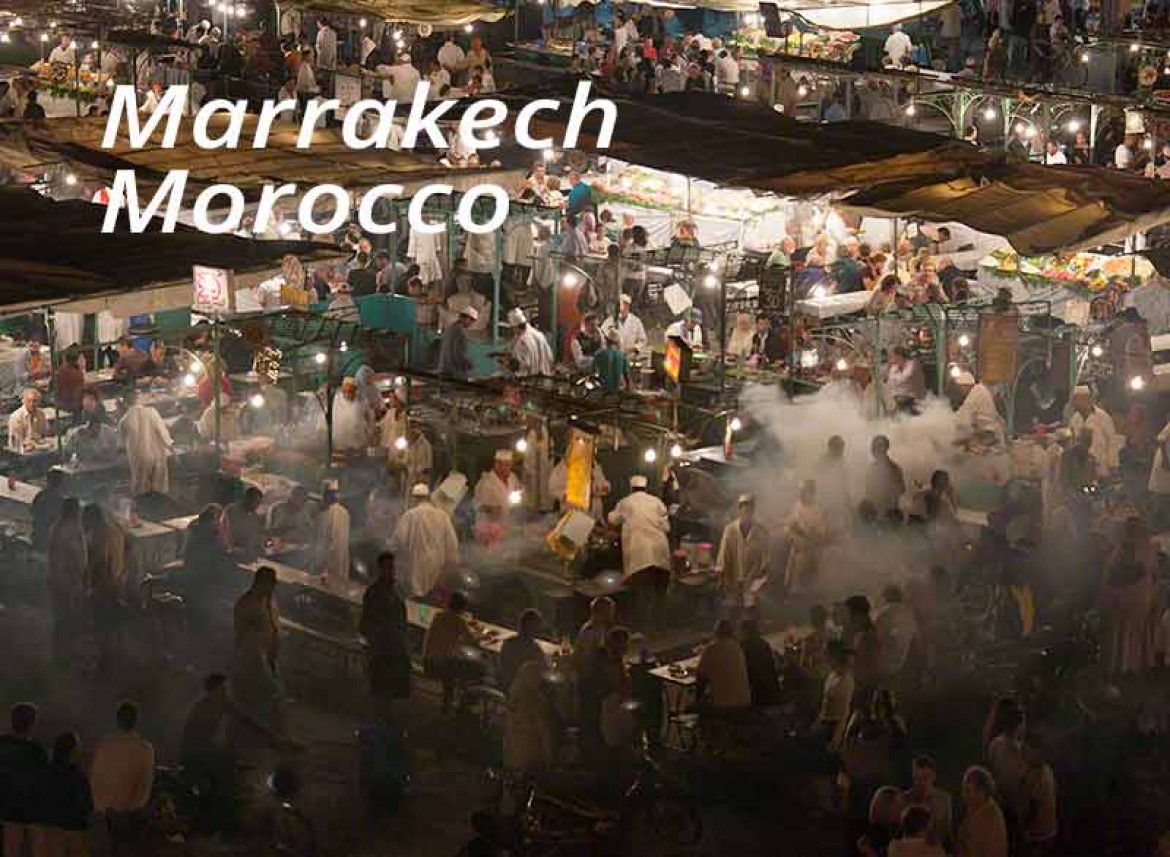 The Souks of Marrakech

It certainly was different. And exotic. Dusty sunlight streamed through the roof slats illuminating the gloom. I was in the main souk standing outside a shoe stall, where shoes and sandals covered the whole shop front, and packed the interior from floor to ceiling. There were more shoes than I have ever seen in a single store in Sydney and even in London. “How can the shop owner afford this stock” I asked my guide now in animated greeting with the shop owner, “it’s been in the family for generations” he half turned and replied. I still did not comprehend. I walked few steps along the narrow passage squeezing past the man pulling his overladen donkey and there was another shoe shop like the first. And another. Amazing! “Let’s go to the wool dyeing area” our guide beckoned, greeting all the vendors as we moved past the food stalls displaying sheep’s heads, the stall owners nodding their response and returning to their task of preparing for their lunchtime customers. This souk was a place that assaulted the senses. There was the smell of  barbecue, and mint, lots of mint, sandalwood, and coriander, and aromas I could not distinguish, heavy, but not unpleasant. We reached the dyeing quarter and were confronted by the intense colours of wool skeins hanging from the rafters fig1.

Brilliant blues and reds and pinks. In contrast the dyers workshops were dark caverns, illuminated by single bulbs, steam billowing from earthenware vats full of dark liquid fig2. One dyer saw me peering into his cave and waved me in, my guide nodding encouragement. And so it went on. Past the shop of all sorts fig3, with cardboard and boxes and various metal objects, and  light fittings and platters piled floor to ceiling, and in the centre of it all a young lad hammering some object into shape. A little further along, I stepped into a shop fig5, bags hanging from the rafters, and rubber boots, conical wicker baskets, and carpets, and clothing, and in the back room, men in deep conversation. I went past the copper smiths with glitzy brass ornaments and gaudy glass chandeliers and copper vases, and then stopped at the jewelers where exquisite finely hammered gold bracelets and chains were on display.  Past the spice stalls with pyramids of yellow cumin, brown coriander, red paprika, white salt, black pepper, and then suddenly we were out in the searing sun of the central square of Jemaa el Fna. There were a lot of people milling around, the snake charmers, the man and his monkey, and the bizarrely dressed water sellers now more for show than water, and all posing for pictures and money.  The magic was gone and the colours were now drab, washed out by the midday sun.

Later, with the setting of sun and the start of the incandescent lights, Jemaa el Fna would again be transformed into a  living vibrant square of barbecue food stalls fig9, and barrows selling Moroccan sweets fig8, and bright orange tangerines that looked better than they tasted. In the half light one could goggle at half naked belly dancers that moved provocatively, but, who on closer examination were men, dressed in drag, and in the darkness illuminated by a single candle, one could just make out a story teller surrounded by his entourage of enthralled onlookers, listening intently to his every word. All around the square, in the shadows and in the glare of the spotlights, people dressed in their finery, strolled in the cool of the night.

Other areas of interest

♦ The back streets of the Medina fig10. A labyrinth of narrow winding streets, many in shadow, seemingly laid out without design.
♦ Medersa Ben Youssef fig11. Previously one of the  largest Koranic boarding schools in the middle east. This 16th century architecturally impressive building has been restored and is now open to the public as an historic site.

♦ It is advisable to get an official guide to show you around, at least for the initial period. This will prevent touts offering their services as free guides and later causing a scene or embarrassment.
♦ If you want to take photographs, then it is essential to get an official guide who is well known around the souks and can advise on protocol and what is allowed and what is not. In general the traders don’t like being photographed, especially without permission, and can get quite irritated. For the first two days I had a great guide who had a lot of patience and we were welcomed everywhere he took us. We were welcomed  into stores without expectation of purchase and had a great experience. The third day I had a different guide, with a completely different persona, for whom everything was difficult and too much trouble, and not surprisingly, I had a disappointing day and ended up with few good images.
♦ Note, My top images of Marrakech are not shown here as they are reserved for my book.
♦ For me, the magic of Marrakech was the assault on the senses. In the vibrant colours and in  the mish-mash of goods in the souks. In the perfume of differing herbs that pervaded the air. In the sound of muted hubbub overlaid with tribal rhythms of tamtams and the piercing call to prayer.
♦Finally, I came away with the impression, that in the square and in the souks there was a veneer of acceptance amongst the local people for the western tourist, but underneath their true sentiment was less welcoming.