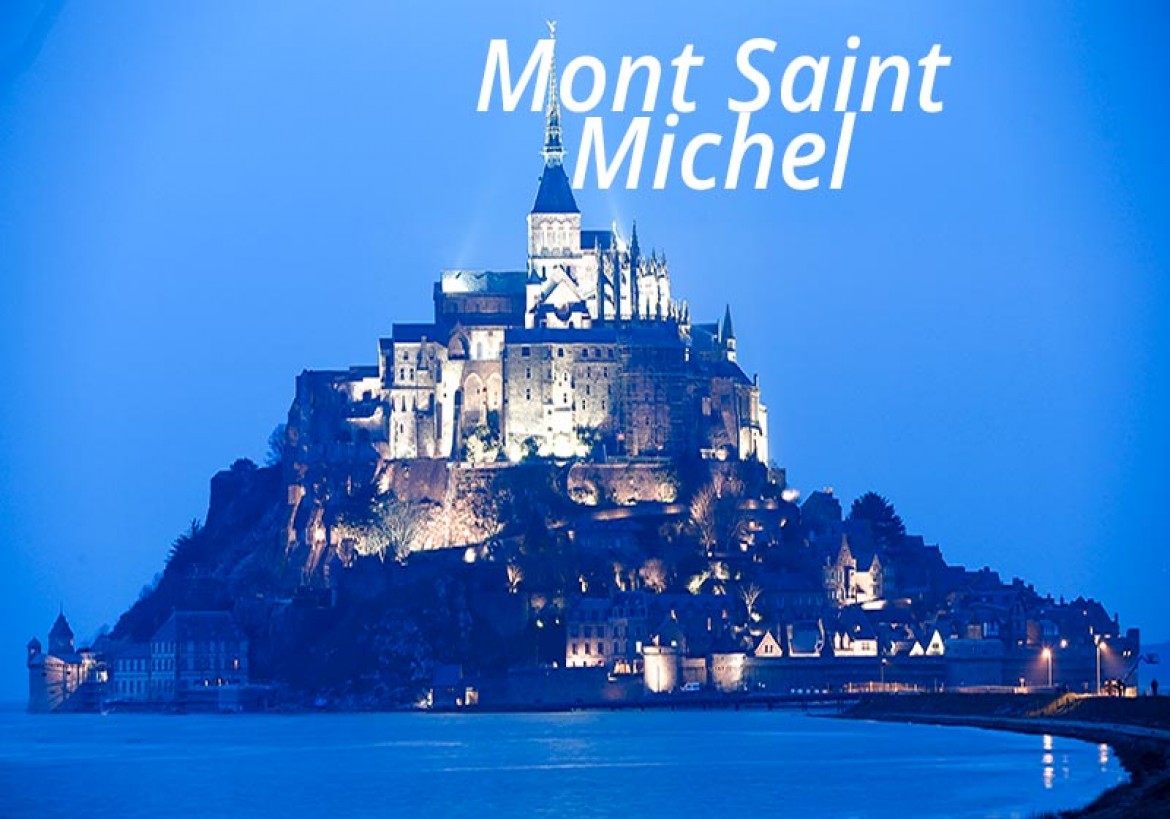 Mont St Michel is a pyramid of granite rising out of the mudflats and quicksands of the Bay of Mont St Michel on the Normandy coast.
Since medieval times, there has been an Abbey located around its peak, and a small village, of narrow streets and alleys that has provided food and shelter for the many pilgrims that came from all over Europe.
The monument is now one of Frances most popular tourist destinations, and during the day its streets are jam- packed, but in the early morning and after the sun has set, the village streets empty and one can conjure up images of its historical past; of monks and knights and bedecked horses clattering over its cobbled streets.

Most months have a peak tide that exceeds 13.5 metres when water encircles the island, inundating the surrounding fields and providing a canvas for a visually stunning landscape.

But Mont St Michel is also notable as a place of many contradictions. It’s raison d’etre was its monastery a place of worship and seclusion for a religious order of monks and nuns; a centre of pilgrimage where the faithful would cross the quicksands on foot and parry with the rushing inward tide. But now there are only 8 monks and 5 nuns (who are rotated with other parishes) and the Abbey does not belong to a religious order but to the secular state. And with 4 million annual visitors of which a quarter reach the Abbey, solitude is hard to find.
More surprisingly, less than thirty people live on the island with all workers and staff leaving at night and returning the next morning. Even the hotel staff does not stay, leaving the night time security to shared watchman. Still, the object of the village is as it has always been, to service its pilgrims; only today they are not religious but secular.

One of the major attractions of Mont St Michel is its isolation by the sea at peak tide when water surrounds the island, leaving the only land access to the mainland via a man made causeway.Incidentally, this causeway is being replaced by a low bridge that will not inhibit the flow of water around the island.

Easter pilgrims re-enact the stations of the cross

Due to the peculiarities of the Bay, the duration of low and high tide are markedly different with the mudflats exposed most of the time. About one hour before peak tide, the sea rushes in, sometimes taking the form of a small bore. Similarly, an hour after peak tide the height of water will have fallen considerably.
The dates and times for the peak tides can be obtained from the Mont st michel official website ot-montsaintmichel.

Getting to Mont St Michel

1) By car. A new car park for all cars and coaches has been built on the outskirts of La Caserne a commercial and service hub at the end of the causeway on the mainland some 2.5km from the Mount. A free shuttle bus (le Navette) departs frequently between 8am and 1am from the centre of Caserne some 800m from the car park and stops on the causeway some 400m short of the entrance to the island. Cars can enter La Caserne and park in the private car park of the hotel only if previous reservations have been.
2) By train from Paris.

i)The most direct route  is by TGV from Montparnasse to Rennes (~2 hours) and then by Keolis bus (1hr 20m) to the Mont stopping about 100m from the entrance. The bus leaves from the bus station a short distance from the north exit of the Rennes Station. Not all trains connect with a bus.(40min connection time, see Keolis bus timetable at  www.destination-montsaintmichel.com). Tickets can be bought online for the total journey from Montparnasse to Mont-St-Michel at www.voyages-sncf.com.
ii) TGV from Paris Saint-Lazare or Montparnasse with a train change to Pontorson and then local bus to the bus stop 100m from Mont St Michel. Bus shuttle times can be obtained from  www.accueilmontsaintmichel.com 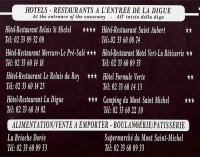 Hotel outside the island 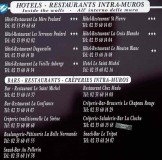 Hotels inside the walls

The notice board at the entrance to the Mont shows 8 hotels within the ramparts and 8 hotels in La Caserne at the end of the Causeway. Most of the hotels on the island are housed in historic buildings, so their rooms are generally small and are located on upper floors accessed by considerable flights of stairs. To get to our hotel room on the 3rd floor, we needed to climb 41 stairs, the last flight up a spiral staircase. Note, most hotels also have additional rooms located in various locations around the village, so it is important to check where the room is located at the time of booking. The hotels in La Caserne are not affected by these restrictions of history and are thus more modern and spacious.

Food on the island is expensive, and quality is not easy to find. There is just so many flambe Grand Marnier crepes (8.50 Euro) one can consume.

To Stay or not to Stay on the Island

I have spent 4 nights in both La Caserne and on the island and much prefer to stay on the island. True, the shuttle can get you there in a short time, but will you stay to experience the magic when the sun sets, and the constant coming and going of the large groups have ceased, leaving the cobblestone streets empty to conjure up the spirits of the past. And will you go outside the ramparts, as night falls and the lights of the mount turn on, all reflected in the waters of the high tide? From my observations, very few visitors from La Caserne do.

The major construction works on the new access bridge is now complete providing an unobstructed view from the side of the access road to the mount and its inundation of the sea during peak tide.