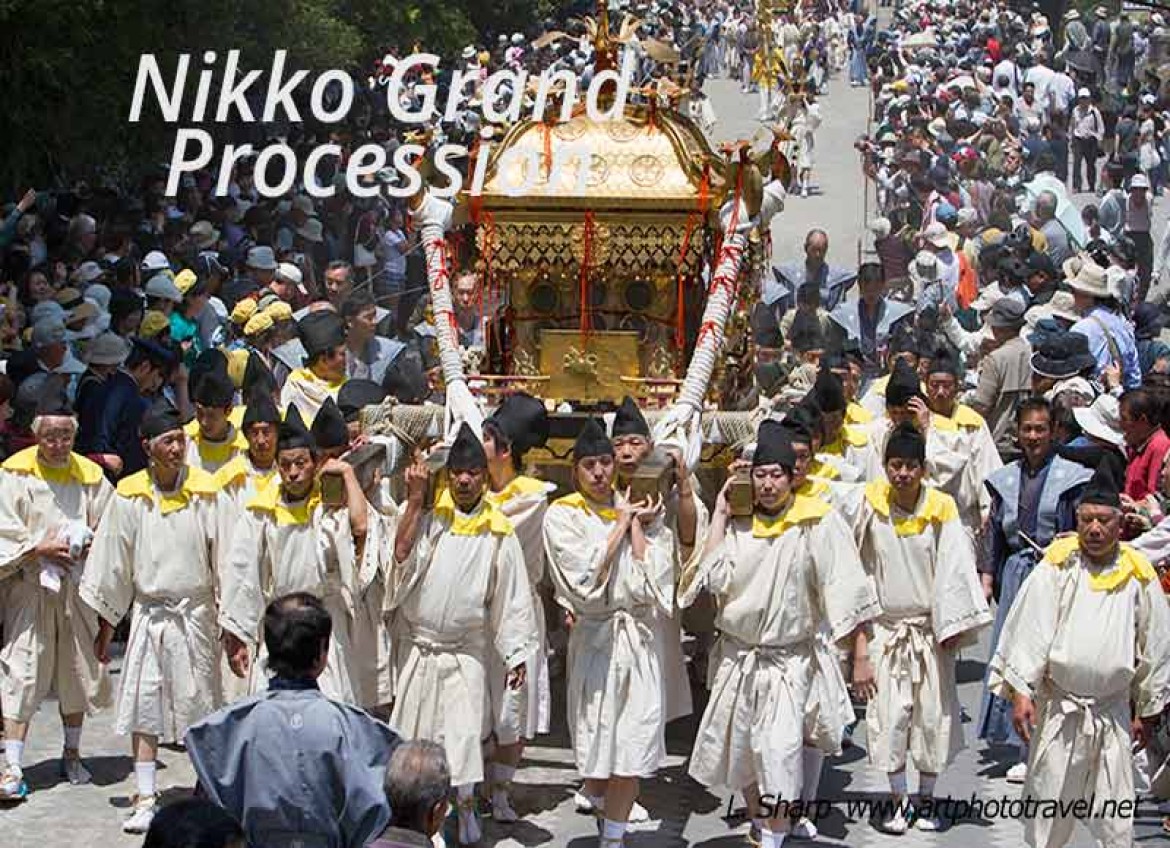 The Nikko Grand Spring Festival re-enacts the procession of a 1000 samurai escorting the remains of Tokugawa Ieyasu, Japan’s first national Shogun, to his entombment in the Toshogu Shrine in Nikko.

As a Warrior, Tokugawa Ieyasu  defeated the feudal lords who had battled each other for decades, reduced the Emperor’s role to that of a figurehead, banished foreigners from Japan and elevated his soldiers, the Samurai, to the highest social rank, so founding the present fascination with the code of the Samurai.
It is held each year(1) on the 17 and 18th May, and consists of two major events, a Shinto ritual of archery on horseback (Yabusame) on the 17th and the procession of a 1000 warriors on the 18th, see Figs1-2.

Most of the procession was performed by local people including children dressed in costume but it had an air about it that lacked authenticity, so  it did not stir any deep emotions in me. There were parts which did impress such as the first group with its “The three sacred horses”  and mounted riders  and their entourage leading the procession that had an air of authority and presence, Fig2,  and ii) the last section where priests struggled with the heavy and ornately decorated three sacred shrines. Overall it was a great experience.

The Yabusame was historically a Shinto ritual and was later employed by the Shoguns as a military training exercise. The Nikko Yabusame involves nine archers in two groups, whose individual task is to hit all three targets spaced 70m apart along the Omote-Sando while mounted on a horse galloping at full speed uphill inside a narrow roped off track Fig3. The archer who is judged the best in striking all three targets is presented with a white flag, as a symbol of the gods’ favour.  Start time~2pm.

♦ I thoroughly enjoyed the  Yabusame as a wonderful example of traditional Japanese horsemanship.

♦ Only one side of the Omote–Sando is available for public viewing where there are a number of rows of seats on a first come first choice basis. Best to come  early to get a good position as it will get packed.

♦ There is a practise run around 2pm in the afternoon  of the 16th with very few onlookers, and no enclosure restrictions, allowing close access Fig4. The archers however are not in traditional costume, and there is no accompanying ceremony. Still it is a good opportunity to photograph the action.

♦ After the Yabusame is over, around 4pm, the three sacred shrines are brought down from the Togusho shrine and transported to the Futarasan- jinja Shrine Fig5. This is a good opportunity to get close and see the priests struggle with the heavy shrines down the steps.

All the Grand Spring Festival activities are intricately connected with the Toshogu Shrine ( see Toshogu shrine map Fig6), a large complex of Shinto shrines and some Buddhist temples  Fig7, dating from the Edo period in the 1600’s and built as a mausoleum for Tokugawa Ieyasu. 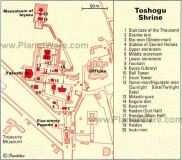 Most of the buildings are constructed of wood that have been intricately carved and gilded Fig8, displaying a profusion of mythical creatures and various animals including the famous engraving of  three wise monkeys Fig9.

The nearby Futarasan-jinja Shrine (the starting point for the procession of 1000 warriors) has a much older history, being the centre of worship since ancient time, and its architecture is much simpler.

♦ Both complexes are surrounded by an extensive old growth forest of tall fir and mapletrees, that has a wonderful ambiance particularly when early morning mists swirl close to the ground.

♦ The shrine buildings are more impressive viewed from the outside than exploring them from the inside, due in part to the large number of visitors and groups which detract from the spiritual atmosphere.

Getting to the Toshugo Shrine directions:

1) Walking from the train stations takes about 30-40min. Exit the JR train station and turn left onto the main road. For the Tobu train station go past the bus stands and turn right on main road, pass the Nikko information centre until you come to the main intersection with the red coloured  Shinkyo bridge spanning the  river on the left (note: the Kanaya hotel is up the hill on left). Cross over the main roads then turn left on the roadside of the main road with oncoming traffic for 30m, then climb the stone steps on your right leading up the hill through the forest, (see Toshogu access map Fig10).

Accommodation close to the Toshogu Shrine

An interesting place to stay and one of the closest hotels to the grand procession is the Kanaya hotel, a national landmark.http://www.kanayahotel.co.jp/english/nikko/index.html Founded in 1873 on the advice of an English gentleman to build a hotel in Nikko to cater for English travellers, it has the feel of a rambling rustic English country lodge with overtones of old Japan. There is even an open air ice skating ring. The accommodation is very variable (and expensive), with some rooms needing refurbishment. As we were staying 6 nights, we were fortunate in being upgraded to an excellent deluxe room in the main building. (1) The 2011 Grand Spring Festival was cancelled due to disruption caused by the Japanese earthquake and tsunami.