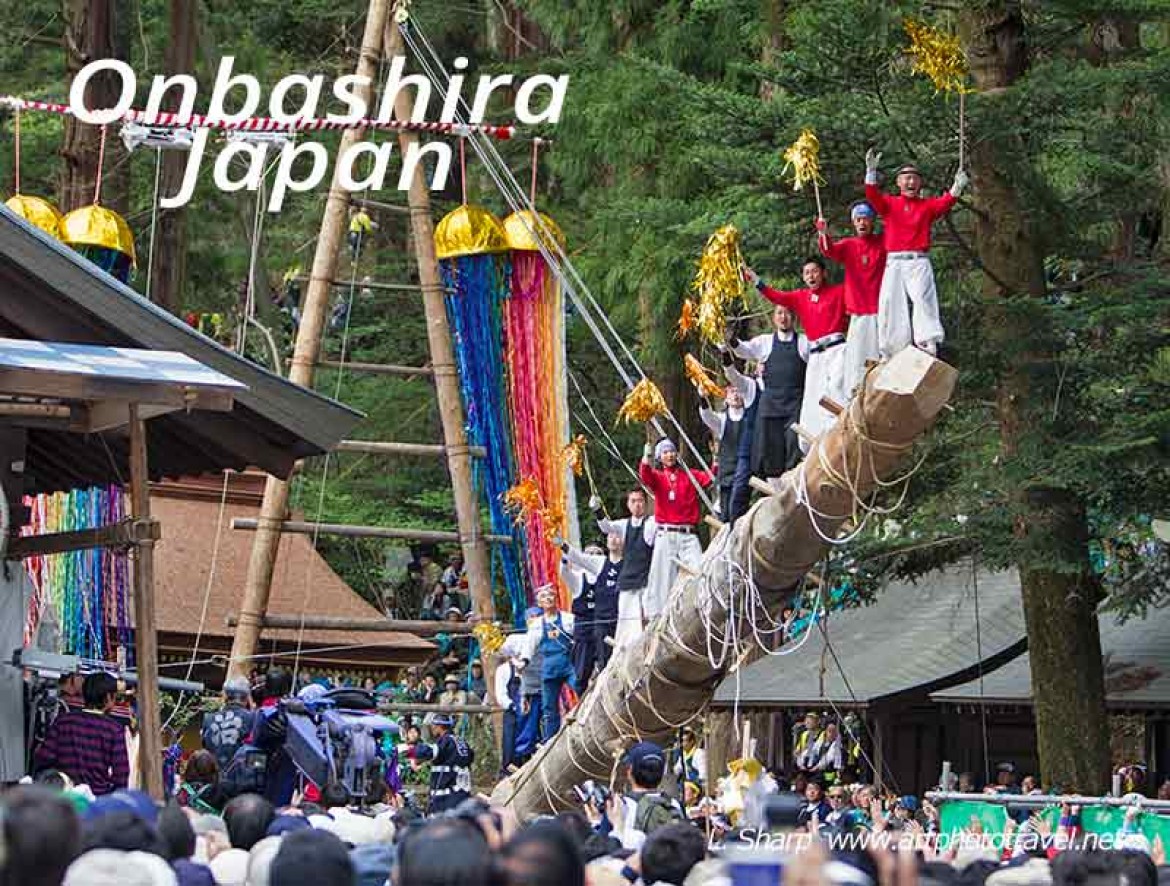 Every 6 years the sacred corner pillars at the four Shinto shrines of Suwa Taisha in Nagano Japan are replaced, with newly felled logs hewn from selected giant fir trees.

These logs are then man hauled from the starting place to the top of the hill where they are slid down the steep embankment (Kiotoshi), hauled across a river, paraded through the city streets and ceremoniously lifted into place (Tata Onbashira). 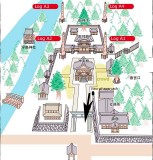 Of course, the Japanese have transformed this ritual into an extreme art form, elevating it into one of the most spectacular and dangerous events in Japan with thousands of active participants and up to a quarter million spectators attending per day. Once the poles are in their final position, the gods of nature can come down to earth and reside in the pillars. So to participate is to be part of a grand community effort, and show a commitment of faith. For some, it is a means of gaining honour and respect by taking the most dangerous positions riding the logs down the mountainside, or standing on the logs as they are raised into position. And there is much danger.

In 20041, 49 participants were hospitalized during Kiotoshi, and 14 during the raising of the pillars. In 2010, I witnessed 2 persons fall to their death as the column was raised and two others fall with serious injury.

The Yamadashi for the Upper Shrine at Chino.

The pillars for the Upper shrine were selected by the townspeople of the Suwa area from the forests near Mt. Yatsugatake and transported by trucks to the Yamadashi festival start area, fig4.  Here, two large wood pegs are inserted into the ends of the logs to form a V, to prevent the logs rolling sideways onto the riders.The pillars are pulled along the roads with long thick ropes to the lip of the hill near Miyagawa primary school in Chino (35°59’22″N 138°9’23″E) Fig4, where men ride the logs down the 40m, 250 slope. The logs are then dragged along the street and across the Miyagawa river, to a site where they stay until the Satobiki festival (2nd half of Onbashira festival), held one month later in May. In all, the logs for the Upper Shrine were man hauled over a 14 kilometres route.
There is reserved seating for spectators at the bottom of the Kiotoshi slope priced up to Y4200, see http://www.onbashira.jp/kamisya/seat.html 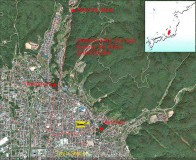 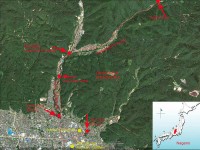 Fig5. The Onbashira for the lower shrine, Shimosuwa. Google earth

was held on 9-11 April 2010. The pillars for the Lower Shrine were stored during the previous year at the Yamadashi start area (fig5) in the north of Shimosuwa city, and did not have V pegs. The logs were man hauled to the Kiotoshi site (36°5’59″N 138°5’31″E) using thick long ropes. This downhill site extends for 100mm and is steeply inclined at 350 contributing to most of injuries and deaths during the Onbashira. The spectator area is 120m from the slope. It has both a free and  reserved seating for spectators at the bottom of the hill (see fig13)  available at up to Y5000. http://www.onbashira.jp/shimosya/seat.html.

A shuttle bus from Shimosuwa station to the Kiotoshi site available.

The Satobiki Ceremony (2nd half Onbashira festival) for the Upper Shrine was held on 2-4 May 2010.
The logs for the upper shrine are man hauled from the resting place near the Miyagawa river (Fig6) to the Maemiya and Honmiya shrines where they are raised into position.

Fig7. resting with the men

The Satobiki Ceremony for the Lower Shrine

was held on 8-10 May 2010.
The hauling route from the resting point to the Harumiya shrine is relatively short and involves a Mini-Kiotoshi where men ride 4 logs down the slope into the shrine grounds (8th May). There is a small viewing area, Fig(2), where it is possible to see both the Kiotoshi and the raising of the H1 pillar. The best place is at the tree shown in fig 2, but it is necessary to get there by 7am. It will get extremely crowded and worse, the police will move large sections of people at any time. Note, that near the tree the crowd will be parted to provide an escape route for the logs in case they overshoot. Also, late comers will block the view of people sitting near the buildings (shaded yellow) at the entrance.

Although it is a difficult place to stay and full of hassles, it is well worth the effort. The whole event turned out to be an amazing spectacle. Unfortunately, four men standing at the very top of the H1 pillar Fig(1) fell, with two being killed. The proceedings were interrupted for medical evacuation and then continued with the same exuberance.

The raising of Harumiya pole H4 on 9 May was a different experience, as the viewing position for spectators is on a steep dirt slope at road level overlooking the raising of the column (see fig2). Good viewing is possible near the front and so it is necessary to get there early (6am?) to gain a good position for the raising of the pillar at 9am. Note, if the viewing position is too good to be true, it probably is, and you will be moved. Best to get a position where no one can block your view.
The route of the 4 pillars to the Akimiya shrine Fig(6) goes through the central part of the town. Here, individuals attach their personal pulling ropes to the main ropes and help haul the logs. The main ropes can extend 100 metres with hundreds of participants pulling a single log. During this part of the route, it is easy to approach the procession. However near the approaches to the Akimiya shrine it gets extremely crowded. Again police will move spectators so it is not clear which areas are available to view the procession. A good place to view the approaching procession is from the gate wall closest to the shrine (Fig3), but the police will move people away that stand near the front. The raising of Akimiya poles A1 and A2 occurs at 9:30am and 10:30am respectively. With the best viewing location for each being as forward as allowed, it is necessary to choose one pole and be there by 7am. By 9am the shrine grounds are full, and there is little to be seen from the back of the crowd.

All the roads in Shimosuwa are blocked to traffic for the festival so it is important to stay within walking distance of the Onbashira. With the influx of over 100,000 people, it is necessary to book well ahead as there is limited accommodation in the town. We got our travel agent to book the small Japanese Ryokan, Ryokan Gingetsu, located in a delightful part of the town not far from the Akimiya shrine. It was expensive particularly the food, but they were very friendly and helpful, and the day before the procession took us by car over the Onbashira route to get familiar with the proceedings.

Some Observations on the Onbashira.

♦ I chose the Shimosuwa Satobiki ceremony as
i) There was both a mini Kiotoshi and pillar raising at the Harumiya shrine,
ii) The log hauling went through the pretty part of Shimosuwa town where it was easy to be part of the procession.

iii) It was not possible to get close to the Kiotoshi for either upper or lower shrine without a photographers pass, although after examining photos, (eg fig13) I believe it would be possible to get some good images using a telephoto lens (>500mm) from the reserved seating at Kiotoshi at Shimosuwa.
♦ Overall it is an amazing spectacle full of excitement, atmosphere and danger.
♦ There are enormous crowds, although well behaved and good natured. There are exceedingly few tourists and in the 3 days of the festival I only saw 5 Europeans.
♦ Getting a good viewing position at the shrines is a real hassle as police can move you at any time.
♦ If you are a photographer and can get a pass it would be much easier, however, there still are many opportunities for great images. It just comes with a lot of hassles and frustrations.
♦ please note that my top images of the Onbahira are not reproduced here as they are reserved for my book.
♦ general information can be obtained mainly in japanese  at http://www.onbashira.jp/shimosya/index.html