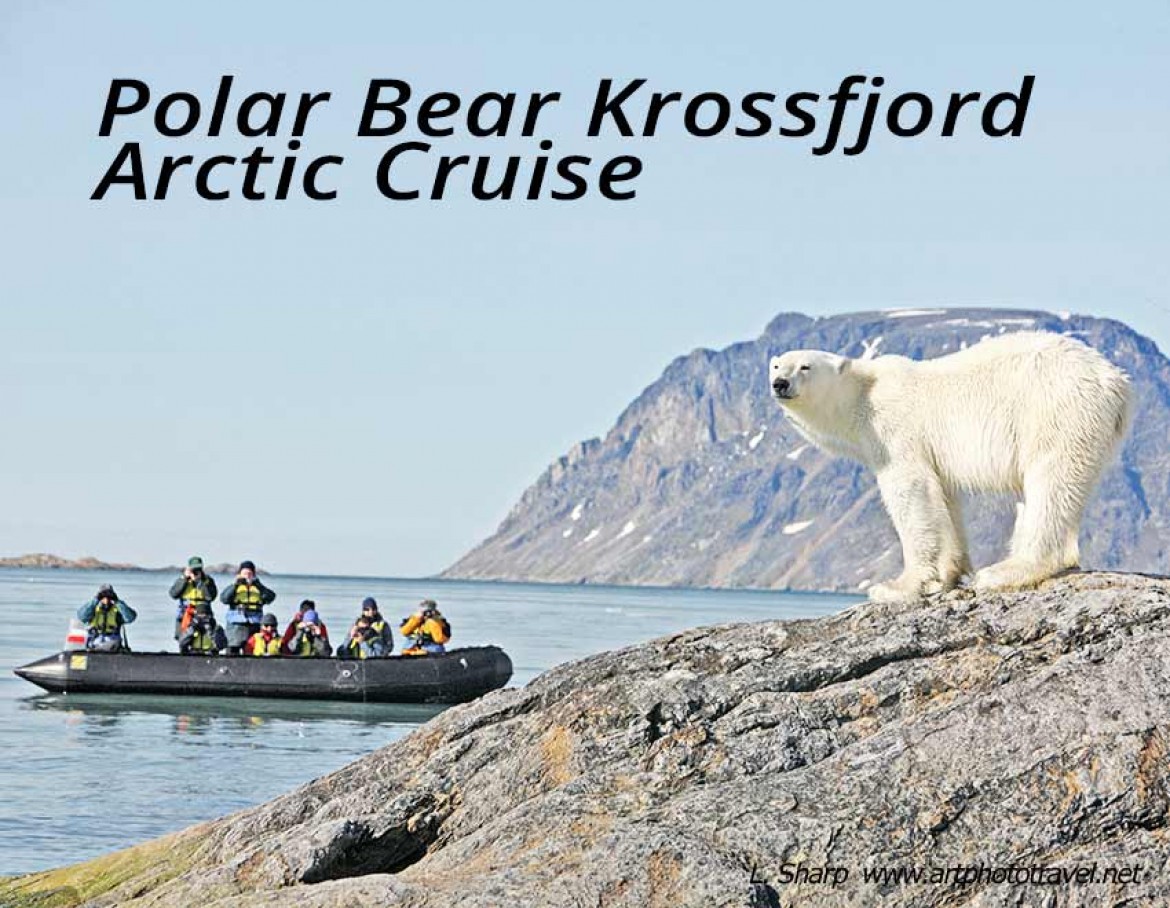 Any Arctic cruise invites comparison with Antarctica. Both are extreme regions of cold and ice. In the best of times, both evoke a sense of awe and wonder at the alien landscape and the life struggle of its inhabitants. The Arctic has overtones of desolation and bleakness, the Antarctic invokes a feeling of grandeur and remoteness.
An Arctic cruise is predominantly a push to reach the furthest north into the pack ice and a search for polar bear and walrus, while in Antarctica with its extensive wildlife, the emphasis is to interact with the vast colonies of penguin and birds on the land.
An advantage of an Arctic cruise, is that it is far more accessible, of shorter duration and thus less expensive, and one can get much closer to the pole than with an Antarctic cruise.
However, if I had to choose, I would choose the Antarctic.

Although there are a number of Arctic cruises (including ice-breaking to the North pole) which leave from various ports in Canada, Russia, and Iceland etc., the most popular is from Longyearbyen, Svalbard. This is partly due to the town being the world’s most northerly regular settlement, with easy ship access to the North Sea ice field, see Fig1,2 Svalbard map, and the considerable number of polar bears in the surrounding region. Getting to Longyearbyen is by four hour flight from Oslo, with a customs and immigration stop both ways at Tromso, requiring all passengers deplane with their hand luggage.

A note on Longyearbyen.

Longyearbyen is a coal mining settlement and administration centre with a population of 2000 persons. The township has suburbs, a hospital, schools, museums and a small central shopping centre containing a modern supermarket and various cafes housed inside to keep warm.  Most residential houses are constructed of brightly painted timber and clapboard, moderating the overall feeling of a cold wind-swept frontier outpost.

♦Longyear airport is often near freezing with wind or rain, requiring warm outer clothes to deplane.
♦The road signpost just outside the town warning of polar bears is unique.
♦The Husky dog kennels at the trappers station in the Bolterdalen Valley, is worth a visit to interact with these remarkable and friendly dogs. In winter the trappers station hosts dog sled excursions.

During the summer there is 24 hours of daylight, and being well inside the Arctic Circle the cruise can reach its target area very early, with one of the principle objectives being the sighting of polar bear. These bears can be observed on the sea ice, foraging along the shoreline and occasionally swimming in the sea.  As polar bears will stalk humans onshore, regulation prohibits tourists from landing if there is a polar bear in the vicinity, and requires shore parties to have an armed guard at the front and back of the group. So observing polar bears is principally from the ship or cruising the foreshore in a Zodiac. Conservation requires the number of zodiacs in close proximity to the bear, be limited so as not to stress the animal. The implication of this convention, is that there be a small number of zodiacs serving a small number of passengers, or the passengers will need to be divided into two flotillas and share Zodiac time. So it is important to be on a small passenger ship to maximize time with the polar bears. 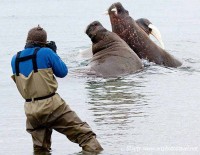 On my ten day cruise I saw 17 polar bears, 12 very close, both from the zodiac and from the boat.

The present population around Svalbard of 1000 -2000 walrus, is spread amongst a small number of social groups, with their main haul-out site on Moffen Island being a protected nature reserve with an extensive summer exclusion zone.  This leaves only a few sizable herds that may be found at other known sites such as Lagoya Island and at Torellneset.
Fortunately for our cruise, there was a single herd of some 200 walrus at Torellinest  that was tolerant to human approach. Some of our group sat quietly on the shoreline a short distance from the pod and were visited by female walruses that were curious and came repeatedly out of the water to inspect at very close range. There was also a second smaller pod of 40 walruses that had hauled out on a sand spit on Nordaustlandet.

About a quarter of the passengers were true birders, and for them to sit onshore in one of the remotest places on earth and observe the various species was about as good as it gets.  For the rest us, most of the arctic birds were, well, small black and white birds. There were spectacular nesting colonies of Kittiwakes and Guillemots on the towering cliffs of Alkefjellet, and a small colony of Puffins on the corner of Mollerfjorden. From time to time Arctic Fulmars with a 1m wingspan accompanied the ship gliding on its air wake. We also witnessed a few examples of a Parasitic Skua hassling a Kittiwake to rob the bird of its catch.

The general panorama of the land was of glaciated rounded mountains  partially blanketed with snow. It was a stark, desolate, black and white landscape. With the right illumination, it felt formidable and impressive.
There were a number of major glacier fronts with calving faces. In particular those of the 14th of July, Lillehook, and Svitodbree Glaciers.

The ice chart for Svalbard on 18 July 2011 is reproduced in Fig2. It shows open water for the west and north sectors of the Svalbard Archipelago which allowed a clear passage to our further-est point north  at 81010.3′, some 540 nautical miles from the north pole.  At this point the ship was breaking ice Fig12., in a panorama of white, fracturing the drift ice into fantastic patterns and scattering the pieces on an indigo sea. It was very cold on deck with a slight mist. The air temperature had suddenly dropped to below freezing and the water temperature was down to -10C.
It was clear we had arrived.
Near the edge of the ice sheet the water surface looked like thick porridge, crystallizing in parts to form bizarre shapes.

The ship had hoped to circumnavigate Svalbard, but there was still an eastern section of close drift ice that would take too much effort and time to break through, so the boat turned around and retraced the outbound route back to Longyearbeyan.
During the whole trip I was surprised, and thrilled to see a considerable number of sculptured translucent blue icebergs. These were composed of old ice and are normally associated with Antarctic waters, but on this cruise I saw many more (although smaller) than in my three previous Antarctic excursions.

In 2010 the Norwegian authorities closed a number of historic sites in the Spitsbergen Archipelago. Nevertheless there were a few  remaining sites dating from the 19th century that could be visited. These included grave sites of whalers that were being exposed by rising sea levels, trappers huts with their rock blubber boilers and the remains of a second world war German weather station that has fallen into disrepair.

♦Of the 54 passengers, there were about 15 photographers, some professional, with a lot of gear. About eight carried tripods and a full range of lenses onto the shore.
♦Ten had 500mm F4 or 600mm F4 super-telephoto lenses with extenders. I found the 500mm very useful both on board the ship and when photographing polar bear from the zodiac.
♦On shore, when photographing walrus with the 500mm lens, I found a tripod very helpful, but otherwise it was clumsy, and I preferred a mono-pod that was anchored in a fishing rod waist halter to steady the camera, both on the ship and in the Zodiac where it took up little room.
♦Other useful lens were a 100-400mm zoom for wildlife and 16-35mm for landscape and a 70-200mm for general work.