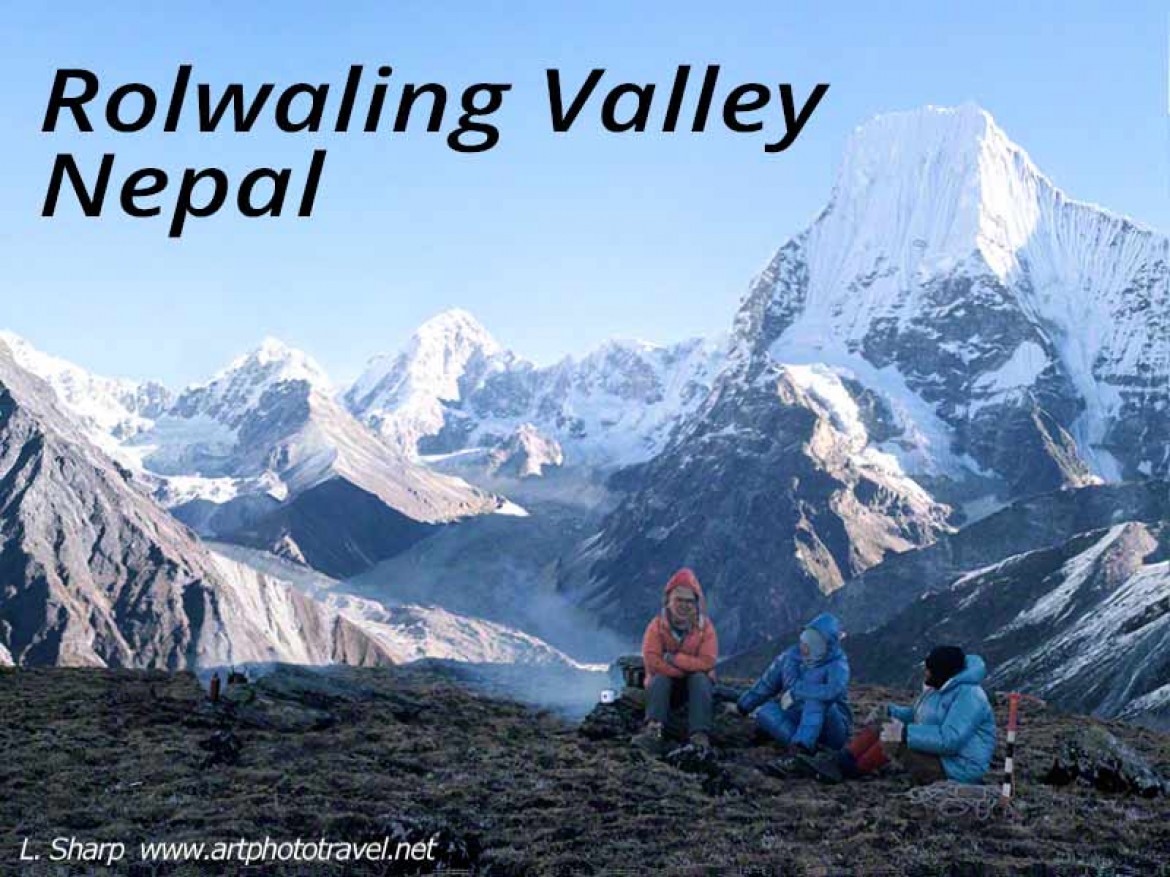 The Rolwaling Valley is one of the great treks of Nepal along its northernmost border with Tibet, (see Rolwaling valley satellite map fig1, and Rolwaling trekking map Fig2.)
The Rolwaling Valley is remote, with a sombre and foreboding ambiance.  There is a potential danger on the approaches to the Tesi Lapsa pass 5755m (also called Teshi Lepsa pass or Trashi Labsta pass), spectacular mountain views on the approaches (4850m) to the Yalung La above Beding, and there is the opportunity to climb the tourist peak of Pachermo~6250m  (aka Parchamo, see route map Fig3), with spectacular panoramic views. The difficulty ranges from moderate in the lowlands to strenuous along the approaches to the Tesi Lapsa pass requiring crampons and ice axes up the Drolambao Glacier and down the eastern exit to Thame.

Trekking permits are needed for the Rolwaling Valley, which require the trek be organised through a government registered trekking agency. This is a prudent condition, as the trek in parts is potentially dangerous.    There is the opportunity to climb one the two tourist peaks in the area, Parchamo (6187m) and Ramdung RO (5930m).  A climbing permit is then required with a fee around $350USD for up to 5 persons, plus the employment  of a climbing Sherpa with a set fee of  $350 plus his daily salary.

This trek is more expensive than most other Nepalese treks, but don’t try to do it on the cheap as it is challenging and without proper equipment, tents, food and experienced guiding you may pay in other ways including injury and worse.
For a party of 2-4 trekkers it is advisable to have a head Sherpa (Sadir) a climbing Sherpa, and 4 porters that can be changed at Beding for 4 high altitude trekking porters. Also at Beding, a local guide that knows the area is often employed to guide the party through the section Tso Rolpo Lake to Thame across the Tesi Lapsa Pass. The trekking company will organise all these formalities from Kathmandu. The return flight from Lukla to Kathmandu should be booked in advance as there is high demand and flights often delayed.

Most trekking agencies advertise a 23 to 27 day trek (include arrival and departure dates) from Kathmandu by bus to Barisbe or Dolkata on the China road, then trekking to Beding in the Rolwaling Valley and exiting across the Tesi Lapsa pass to Namche Bazaar, returning to Kathmandu by air from Lukla. Some itineraries include climbing the peaks of Parcharmo or Ramdung. From Namche Bazaar, one can extend the trek to Everest Base camp. There are some itineraries as short as 17 days, which is possible, but in my opinion is rushed. Some itineraries trek to Beding from Dolkata and then exit via the Yalung La, which in my opinion is to miss the best part.

The approach trek, Dolkata to Beding could be shortened for the physically fit, as the route is not particularly rewarding (compared to other Nepali treks). The second half, Beding to Thame, including Ramdung base camp is an entirely different matter and should not be rushed, but savoured as this is a spectacular region, full of atmosphere with an ambiance, part wonderment, part exhilaration with overtones of foreboding and a tinge of danger. My suggested trekking time is 25 days (minimum) composed of 5 days Dolkata to Beding, 2 -3 days Beding and Nan Goan, 5 days up to the high camp near Ramdung base camp exploring and acclimatizing, 4 days to the Tesi Lapsa pass, 4 days exploring, at the pass and climbing Parchamo, 3 days to Namche bazaar, 2 days to Lukla. The slow approach to the Tesi Lapsa is to gain altitude acclaminzation. Altitude sickness is not uncommon and poses a risk on this trek.

1)   Near the village of Singati a view of the snow capped peaks of the Rolwaling Valley present themselves Fig5., Gauri Shankar to the left with Mengalutse in the centre, Kang Nachugo a small peak to its right, and  Bigphera –Go with three fingers appeared far in the distance floating above the millet fields. It marks the destination for it sits to the right of the Drombulao glacier and sets the position of the final snow approach to the Tesi Lapsa pass. It was our polar star.
2)   The entrance to the Rolwaling valley,  a dark barren and foreboding glacial shaped finger valley that is cloaked most of the day  in deep shadow  fig6.

3)   The panoramic vista from the high camp fig7. overlooking the Rolwaling valley on the way to the Yalung La up a steep track from Nan Goan.

i) From this camp the sunrise ( September to November) over Gauri Shankar (aka Gauri Sankar) is one of the  great visual images, as the sun’s rays touch the far peak of Gauri Shankar turning it into a golden crown, while the rest of the mountain is still in its night-time colours  of silver grey (photo not shown as reserved for my book).

ii) Looking to the right of Kang Nachuga Fig7 (it is just out of the image on the left) one can view deep into Tibet, Chobutse on the right, its great snow face changing colours from deep red to brilliant yellow, then turning a pastel mauve as the sun disappears. Peering closer into the valley there is Dangnok Ri  peak at the head of the  Rimpo Char a great frosted  glacier. To the right just out of view is the mighty snow face of Chobutse, Fig8.

4)   Camping at the Tso Rolpa lake,Fig6 (aka Tsho Rolpa Lake), and the challenging traverse along its flank composed of broken loose rock.

5)   When we were there the surface of the lake was frozen. Here falling rocks would skid across the surface, wailing like children in torment. This unnerved the whole party and every time a rock fell, both the Sherpas and porters would prey fervently. This happened throughout the night.

6)   The next camp was pitched near the front of the Trakarding glacier, fig7, where the high moraines shielded against avalanche. Nevertheless, the night was punctuated by the roar of avalanche, followed by utter silence. Then came the whistling as airborne rocks hurtled passed the tent, followed by a deep thump as they slammed into the surrounding scree. It was quite a night. Early next day the traverse of the Tradaring Glacier Fig11.
7)   Climbing up the Drolumbao ice fall fig12. with Bigphera-Go (6729m) as a backdrop, and walking up the glacier with crampons and ice axes, feeling the effects of altitude; 8 steps forward and then having to pause, fig13.

8)   We had just climbed the ice fall when in the distance two local guides were running down the snow slope from the Tesi Lapsa without crampons, (so they could get to Beding for one additional guiding trip over the pass before it would be closed by winter snow) slipped on an icy patch and now both were sliding down on their backs picking up speed and heading towards us and over the icefall to oblivion.  Our party zigzagged the ropes across the route with a man at each point.  As the two slid past us they were caught in the rope pulling each standing man down in turn with their momentum until they came to a stop. It saved their lives.

9)   At the pass we camped for a day and savoured the views. Next day we would climb Parchamo Fig14.
10)  But that was not to be.  At 4am I was awakened by my climbing Sherpa and local guide rolling in the snow with their heads bound with rope to stop the pain. They had taken a spirit stove into their tent and were now suffering from altitude sickness and carbon monoxide poisoning.  They could still walk so I escorted them down the glaciers on the Tesi Lapsa eastern side while the rest of the party broke camp and followed our footsteps. One hour later the local guide collapsed in the snow but was later found by the remaining party and carried down.  At about 4,600m both had recovered sufficiently to walk to Thame Fig15. It was a close call.

1)   Don’t go with a large party on this trek. I would suggest 2 to 4 persons plus support staff.
2)   Take a Sadir plus another senior Sherpa eg a climbing  guide, so the party can split if they so desire into two independent groups for a short time, ( eg one can climb, one can explore) and rejoin when convenient.
3)   Choose an experienced family man as Sadir who can gain the respect of the porters and local people, and not a young go-getter. We were on the brink of sacking our young Sadir while at the high camp near Beding. He made a lot of silly mistakes and we believed cheated the porters, as they complained to our climbing Sherpa. Our climbing Sherpa was fantastic so from a trekking perspective we had no problems.
4)   Make sure the group stays together and within close proximity to the tents, food and other supplies. White out can occur suddenly and our Sadir was previously with a Rowaling trek where 3 trekkers died from exposure, lost in a white out.
5)   The best direction is from West to East.  Some treks go the other way, but my suggestion is not to, as the excitement builds from Beding to the Tesi Lapsa pass. Also this direction and its timing is best suited for acclimatization and appreciation of the surroundings.

This trek is predominantly about landscapes, and expedition type portraits. There are fantastic mountain sunrise and sunset opportunities.
A panoramic camera would be useful. Also a 16-35mm zoom, 35-70mm zoom for portraits and landscapes, and a 70-200mm zoom for details of peaks, and trek members climbing. A tripod is useful but not essential as one can find a rock on which to place the camera. A remote release cable is useful.