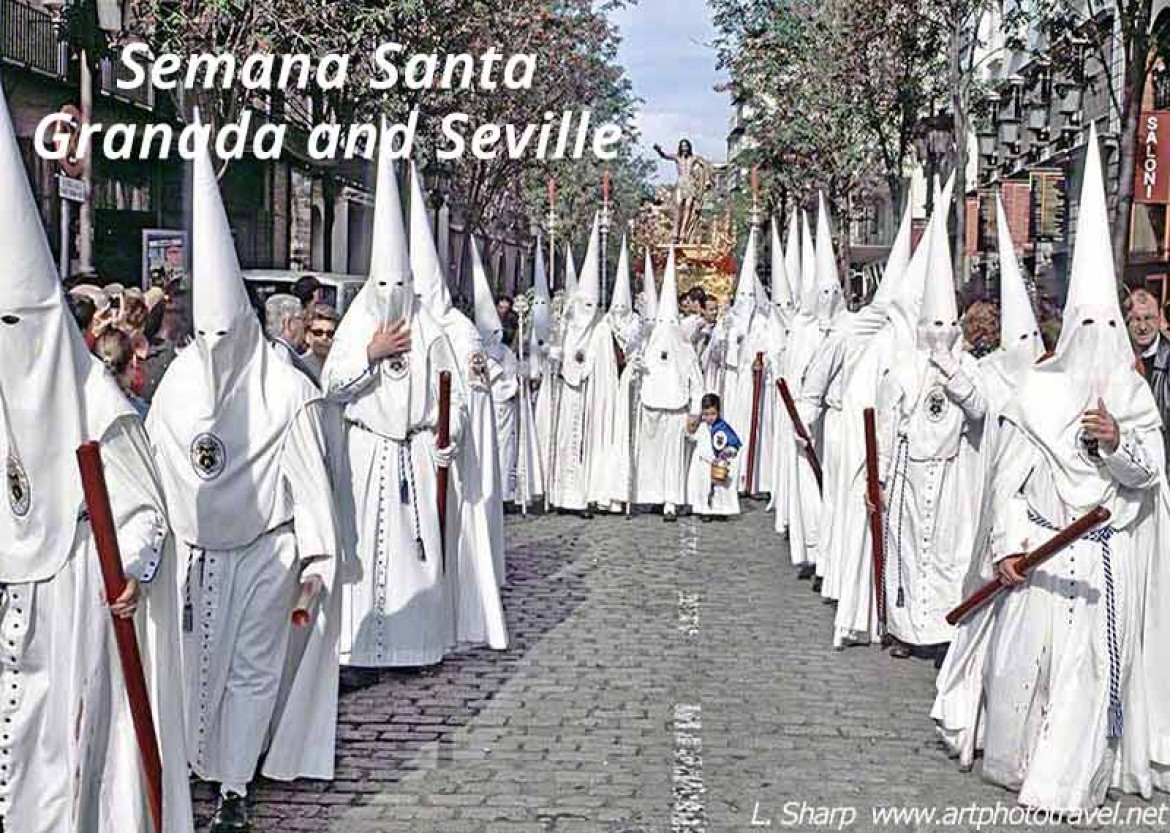 Semana Santa has a week of deeply moving processions of brotherhoods celebrating the glory of Christ and re-enacting the stations of the cross. It takes place during the holy week of Easter in many towns and villages of Spain, with Grenada and Seville being prominent centres.
Nevertheless it should be emphasised that two hearts beat in Granada, for it has both a Christian and as well as a Moorish identity.

The Alhambra, an architectural treasure that heralds the past glory of the Spanish Sultanate, stands on a promontory overlooking the town, while in the centre of the old city is the cavernous Renaissance Cathedral of the Incarnation, that celebrates the here and now of Catholic Spain.  During the Christian holy week of Easter, the Cathedral becomes the focus of large religious processions that commemorate the last week of the life of Jesus. 32 Confradias (brotherhoods) and their entourage of Nazarene and Penitents, often numbering in their hundreds and cloaked in costumes of anonymity, parade through the streets of the old city. Most Confradia display two carved wooden sculptures, one depicting a scene from Christ’s passion and the other
depicting a young mourning Virgin Mary.

Each of these intricate works of art form part of a lavishly decorated float that is carried on the shoulders of some 40 men (the Costaleros) Fig2, hidden behind side curtains that prevent them from seeing outside.

They are told how to move by an overseer (Capataz) walking alongside the float, who instructs the team by voice or taps out coded messages with a small ceremonial hammer.
Some of these floats are so tall  that to get through the front door of their church, the Costaleros have to inch the float through the door on their knees. En route the procession will stop from time to time to rest the Costaleros, and to allow a single flamenco singer to render the soulful chant of the Saeta, a song reflecting a yearning for suffering and immortality. The Saeta is heard by all in reverent silence, and when the cantor has finished, there is loud clapping and cries of “Ay que linda”. And so the procession slowly proceeds, winding through the narrow streets lined by dedicated followers and wellwishers.  A journey that can take many hours.

There are 32 processions over 8 days, most visiting the Cathedral via a common official route, but otherwise taking different routes and times. Most start late in the day and finish during the night time hours of the morning. But there are a few processions that start in the late afternoon. As I prefer to photograph with some natural light, I have included those processions that start before 18:00 and provide ample time for observation before dusk at ~9pm.  The routes of the processions and their starting times are shown in Figs7-10. Half routes are shown for some processions which start later but still have significant daylight. Note these routes and times were for 2011, and  may change in the future. See semanasantagranada itinerarios for update and details.

♦ I found Holy Week a moving and an authentic experience. All the spectators seemed involved.

♦ Many of Granada streets provide a wonderful backdrop to the procession.
♦ There were many sections in the narrow streets where there were few spectators allowing close contact with the procession. It provided an intimate ambiance, and humanized the Nazarene and Penitents, even though their persona was hidden from view.
♦ Note the procession routes and schedules can change, so it is important to get the latest update from the official tourist office.  infotur@dipgra.es or  from  http://www.hermandadesdegranada.com/.
♦ Note these routes indicate the principal places and may skips some streets. Also the maps do not indicate where there may be large crowds and where there would be few spectators.
♦ It is possible to hire seats on the official route from  The Federacion de Cofradías,  but it is just as convenient to find an intimate viewing place along one of the streets.
♦ I found using a local guide (Robert Muguerza Bartlett, a Granada official guide, contact:   robert_muguerza@yahoo.es ) was very helpful. He walked me through the actual route of the processions, and found the most appropriate places to photograph. He was able to gain access to balconies that gave an overview of the procession ( eg. see fig4), and advised on the protocols for photographing the procession and followers without causing offence or unease.

As in Grenada, the Confradias parade through the historic centre of the town to commemorate and give homage to the last week of the life of Jesus.  It is a deep felt religious event whose mood changes ranging from sombre when remembering the Crucifixion on Good Friday, to joyous with the celebration of the Resurrection on Easter Sunday. In Seville the processions are staged on a much grander scale than in Grenada, with their Nazarene and Penitents numbering into the thousands. For the Macarena, the Nazarenos number around 2,500 and the procession has hundreds of followers dressed as roman legionaires sporting white feather plumage (see Fig14), and all swaying in unison to the stirring music as they accompany the float of Jesus.  Access and getting close to the processions are more difficult than in Grenada, due in part to the greater local population and in part to the large number of visitors and tourist which come to attend or view the festival.  Still with a little preparation one can get intimate viewing positions.  I used the services of a private guide to find the most appropriate places.

♦ The Macarena is an impressive and moving procession to witness. It is probably the largest procession in Seville. It also takes the longest to complete at ~14 hours.

♦ It starts at midnight reaching the Cathedral around 8am and takes a further 6 hours for its return journey.
♦ It took just over 3 hours to pass my observation point in calle Parras, a long narrow street. This is an amazing place to witness the procession, with onlookers and the confradia packed wall to wall (fig13). However to fully appreciate the immensity of the Macarena in this street, it is adviseable to view from a 1st story balcony.
♦ I am not sure how to hire private balconies here, but I had a front room in the Hotel San Gil. This hotel has a number of balconies overlooking the street.
♦ A highlight for me was the singing of the Saeta by a single female cantor who was heard in reverent  silence by the whole street. When completed there was clapping, cries of  “Ay que Linda”, and rose petals were showered onto the entourage from the high balconies, Fig15.
♦ The routes and times  are officially finalized some 14 days before Palm Sunday, so they may change from year to year. Best to confirm from the official tourist office or from the websites such as itinerario oficial semana santa de sevilla , or through  http://www.hermandades-de-sevilla.org/ .
♦ One can purchase seat tickets along the official route (see grey section Fig16),  from 70 Euro to 700 Euro, see  http://www.hermandades-de-sevilla.org/marco12.htm , price list .
♦ Please note, my top photographs of Semana Santa are not shown on this website as they are reserved for my book.