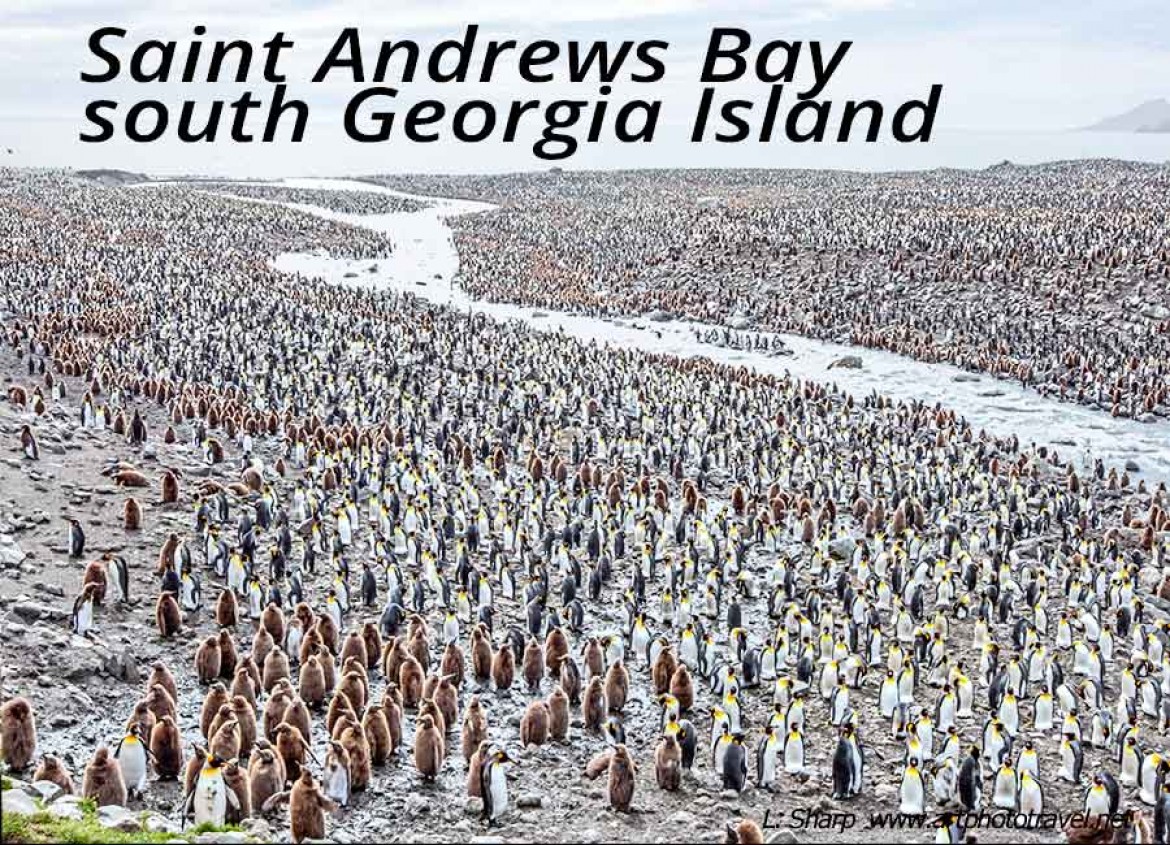 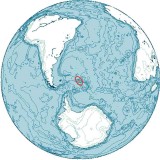 Often the skies are grey, and the wind blows with sleet and snow. Occasionally a violent Katabatic wind pushes everything over, but when the skies are blue and the oceans calm, South Georgia presents one of the greatest visual spectacles on earth.

At St Andrews Bay and Salisbury Plains (see South Georgia map Fig2), snow capped mountains with glaciers flowing into the sea, provide the backdrop for hundreds of thousands of King penguins spaced one pecking distance apart for as far as the eye can see.

And on the shoreline elephant seal beach masters hack into one another, blood spattered red on their wrinkled fur.  It is one of the places you really should experience.

The weather and landing Realities for South Georgia.

Due to South Georgia Island’s location in the Southern Ocean (see South Georgia location map Fig1),  the permanently cold sea maintains a highly variable and harsh cold weather climate with a daily maximum temperature of 00C in winter and 80C in summer.

Westerly winds blow throughout the year interspersed with periods of calm. These prevailing weather conditions make the island difficult to approach by ship. As access to the island is only by expeditionary cruise ship1 or some sailing boats out of the Falkland Islands, there is a high risk that a particular landing position will not be achieved. It is thus essential to choose an expedition ship that has a flexible visiting plan longer than a few days (e.g. see Southe Georgia cruise map Fig3), to have a reasonable chance of landing on shore. The summer months, November -February have better outcomes, but by December most of the elephant seal beach-masters have left (males arrive late August, females September-October).

For me, the supreme highlight of South Georgia was the 200,000 pair king penguin colony at St Andrews Bay(St Andrews Bay map fig4) that covered the land like a blanket fig5 featured image above), extending from the pebbly foreshores to the mountain foothills of the hinterland.

A melt water river meandered through the penguin colony dividing it into two, and flushing the guano into the sea, so the penguin smell of this colony was not as strong as one might expect. There was a central hill behind the colony and a small rise on the left that provided good panoramic overviews. In November the giant elephant seal beach masters defend their territory from challenges, and there are snappy fur seals on the approaches from the landing sites.  There is also a herd of Reindeer that occupies the hinterland.  Giant petrels patrol the beach in search for food and leopard seals cruise the shores waiting to catch a penguin.

Salisbury Plains , has a 60,000 pair King Penguin colony (see  Sailisbury Plains map fig8). Overall it did not present as impressive a panorama as St Andrews Bay, but it still was overwhelming.

One of the highlights of Salisbury plain is the opportunity to composite penguins and mountains in the same photographic frame fig10,

and to get portraits of king penguins reflected in the still water of number of ponds. There are elephant and fur seals on the foreshores.

The visiting area is located below an amphitheatre of dramatic hanging glaciers, with a series of foreground lagoons that are hidden from the beach by two small hills that provide good overview (see Gold Harbour map fig11) .

The highlight for the serious photographer is the breeding colony of King Penguins in an area of small tussock humps. 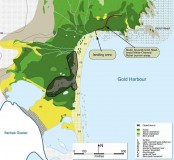 This provides the opportunity to photograph the classic courtship ritual of the King penguin fig12.  The beach is also crowded with southern elephant seals harems.

Prion island has a number Wandering Albatross nesting sites. These are some distance from the landing site up a slippery and moderately difficult route that leads to the designated viewing area of wide grass covered slopes fig13,14.
As these endangered birds are sensitive to being disturbed, the island management plan requires the party to be divided into a number of small groups that rotate discreetly around the  nesting sites.
So the actual time with any given albatross pair is dependent on the size of the group, and can be as short as 20 minutes. Still there is always one group that may witness the intricate courtship ritual.

Both times it rained. The first time I landed on its narrow shore, and decided to take shelter under a rock overhang to keep dry and did not go any further. Those who continued along the shore were doused with runoff water from the hillside saturated in penguin guano. They all returned to the ship smelling of penguin, an aroma that persisted for some days. The second time I stayed on the boat, as not only did it rain but there was high wind and rough seas that made the return journey quite perilous.  There is a small king penguin colony but the best part is the view one gets from the boat, with the high mountains and hanging glacier with impressive high waterfalls.

This has a small king penguin colony with elephant and fur seals along its shore, and a small number of reindeer that graze in the hinterland ( see Fortuna bay map fig18).
One of the interesting sights is the southern giant petrel with a 2m wingspan, which is aggressive and often projects an aggressive stance fig16.

Yet when the bird is on the nest it is fragile and easily disturbed.
Some expedition ships organise a hike over the mountains from Fortuna bay to Stromness Harbour, following the final section of Ernest Shackleton epic scramble over the South Georgia Mountains.

Stromness operated as a whaling station from 1912 until 1931, but is now abandoned fig17. It is the place where Ernest Shackleton and his three companions staggered into the manager’s house after his epic open sea journey from Elephant Island and his trek over South Georgia’s interior mountains to reach this isolated community at the ends of the earth. From here he launched a recovery expedition, for his remaining crew sheltering on Elephant Island after their ship the Endurance was crushed in the ice pack off the Weddell Sea.

This was once a booming whaling station figs19,20, but now the whaling plant is abandoned and all that remains are the symbols of their wanton activities. The only native inhabitants are a few penguins and fur or elephant seals that inch around these ruins.
There is small residential staff, which mans the museum, and post office, and look after the place. There is a small wooden church that glows white in the sunshine and stands prominently against a backdrop of snow covered mountains. A little further around the bay, overlooking the landing zone, is a small cemetery where Ernest Shackleton fig21, is buried, having died en-route to South Georgia on his final Antarctica expedition.

♦A number of the landing places (eg St Andrews Bay, Salisbury, Gold Harbour) are sensitive to sudden Katabatic winds, so the expedition boat should have sufficient Zodiacs for emergency departure from the shore.
♦In good weather you want to spend as much time as possible on land, and not  have to involuntary share shore time. So the boat should not have more than 100 guests.  See comments in Antarcitca Travel.

♦Exposure is a major issue with the large amount of snow. Also the eyes of the King penguin are nearly black, but not quite, so with the right exposure the eyes can be distinguished. So exposure must be predetermined for fast action or using a camera with fast bracketing is a great asset.
♦A range of lenses is useful, from panoramic for the large King penguin colonies at St Andrews (fig5 used 35mm) and Salisbury plains, to 500mm for portraits (fig13) as you cannot enter the tight packed colonies themselves or get too close to the Albatross, or leopard seals prowling the shores. Probably a 300mm (eg 100-400mm zoom) is adequate for most portraits (figs 6,7,12,16). This can be handled by using a small set of zooms, plus a long prime for specific use.
♦ A carbon fibre style tripod is useful for the longer lenses when photographing from a static position. A lot of the serious photographers had them. A lighter option, and in my opinion just as good when using a modern high ISO 35mm camera, is a carbon fibre mono-pod. I took both with me on board and decided which I needed on each day.
♦Note all equipment has to be carried on your back to and from and while on shore. Too heavy a pack can be an issue when trekking on snow or wet rocks, or getting in and out of the Zodiacs in bad weather. So it is  important to make sure no unnecessary equipment is taken onshore.  One my second trip, a photographer with a huge pack was blown over backwards while walking up a steep slope, broke her arm and had to be evacuated. All the photographic equipment should be put in a dry-pack that can be immersed in water while being transported in the Zodiacs.

A list of expedition cruise websites can be found at