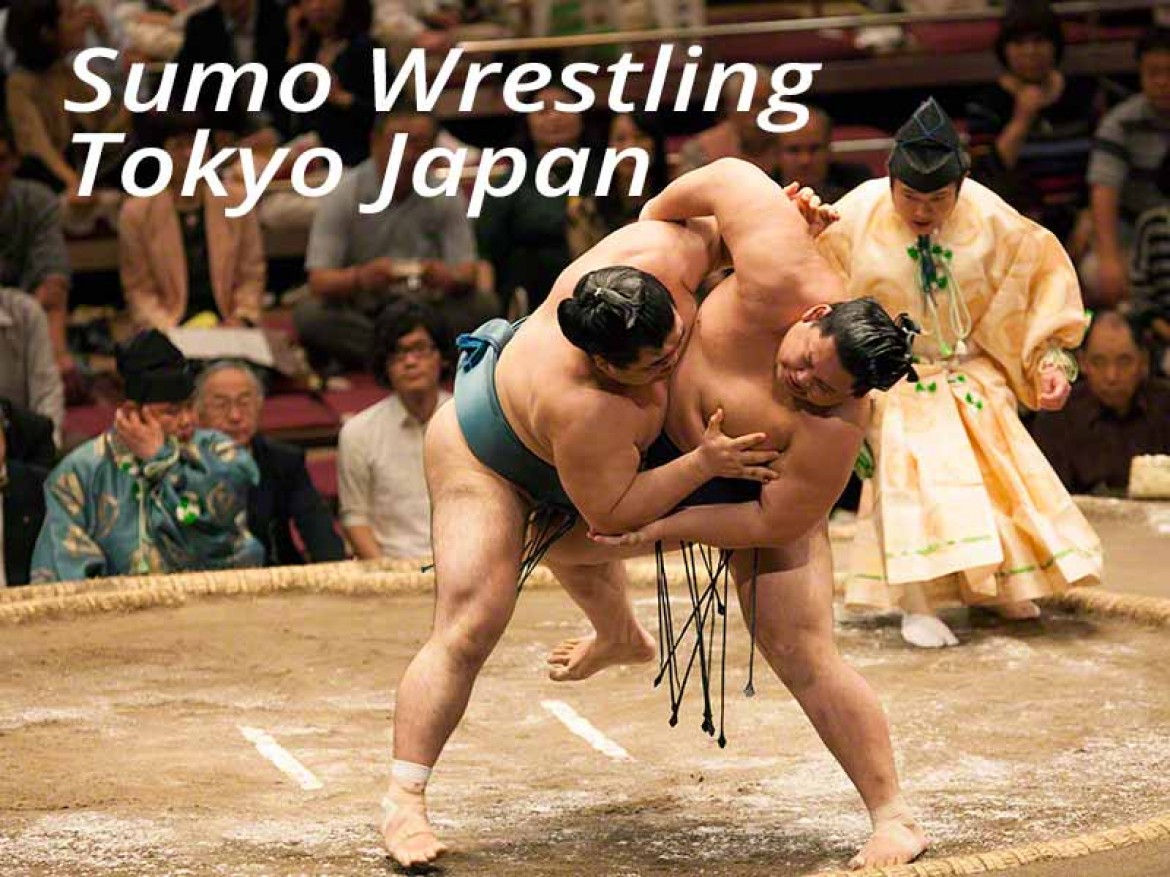 Sumo wrestling takes place in the Ryogoku Kokugikan, a three level indoor Sumo stadium capable of holding 13,000 spectators. It is located next to the Edo-Tokyo Museum, a two minute walk from the Ryōgoku train station on the JR Sobu line.A detailed seating plan with prices is published at http://www.sumo.or.jp/pdf/en/guide_english.pdf . A general seating plan for the ground floor is shown in Fig1.

Although the stadium holds a large number of spectators, it is quite compact, providing an excellent-to-very good view of the wresting from all positions on the 1st floor, and very good-to- good view from the 2nd floor chaired section A. The view from the last row section C on the 1st floor is shown in fig 2,and the view from the 1st row chaired section B on the 2nd floor is shown in fig3. The 1st floor seating consists of reserved small boxes ( bring an extra cushion ) that seat 2-4 persons arranged in three tiered sections A, B, and C, with A being the closest.

There are also 7 rows of individual ringside seats that surround the raised 3.5 m diameter competition ring, the Dohyo (see fig 3). All the boxes and ringside seats require the audience to squat on the floor. At the back of the arena on the 1st floor ( last row section C) are a number of chaired 4 person boxes (fig 4).These are spacious with a table and have a good view of the Dohyo (see fig 2).

Photographing the action from the boxes has its problems as the heads of the people in front can obstruct the view. In addition, the head referees sit in the centre of each side of the Dohyo with their heads and shoulders masking the edge of ring. It is less obscured from the diagonals where there are isles which are kept strictly clear.

Photographing standing at the back of the arena near the diagonals is excellent, fig 5, but requires a telephoto lens of 300mm f2.8 set at iso 1000 for a shutter speed 1/320 sec. There are officials at these positions but they are unlikely to bother you if you hold an appropriate seat ticket and are discreet. Disabled people in wheel chairs are also seated here and standing just behind them doesn’t cause any obstruction. I used a mono-pod and was not bothered during the two days I stood at these positions taking photographs. This included the top division when the stadium was packed.

A second excellent position is the 1st row ringside, but for this you may need a press pass and the photographers are packed close together. Most of the press photographers use flash, fig 6, as from their ringside position the competitors are partially silhouetted by the arena floodlights.

Fig7 presentation of the finalists

But further back, flash is not necessary as the Dohyo is evenly lit and there is adequate fill in reflection from its surface. The 1st row of the chaired section A on the 2nd floor is also an excellent position, fig 7 and one can use a 70-200m f2.8. lens.The stadium is generally empty for all the early divisions, see Fig 2& 3 ( earlier than 2pm) including the final day, so with a 1st floor ticket you can sit anywhere that is vacant until the owners turn up. Note, standing or sitting in the isles will attract an official.

There are six divisions which are held each day starting at 8.00am and finishing with the top division, the makuuchi, at around 6pm. The stadium starts to fill around 3pm with the entry of the second rank division, the juryo. The tournament lasts 15days from Sunday to Sunday with all competitors in the top 2 divisions compete each day. On the final day the last three bouts are between the top 6 ranked competitors.

The important thing to note is that any day is good as all the top competitors including the best compete, the overall tournament winner being the competitor who had the most wins over the whole tournament not just the last bout on the final day. In May 2010 the winner Hakuho Sho won every one of his tournament bouts for an unbeaten record of 15-0, held the title of Yokozuna or Grand champion, having won many previous tournaments, fig. 8.

The box office is open about a month before the competition. The next tournament tickets go on sale April 7. On the night before the tickets go on sale, people line up at the Kokugikan to get a reservation number for a guaranteed position in following mornings queue to buy tickets.So getting good tickets can be difficult especially if you are overseas, and hours matter. Tickets can be purchased on line but this needs a Japanese address and bank account. I did contact http://www.buysumotickets.com who has direct access to the ticket booking process and replies promptly, he also takes pre bookings.

The stadium is a few minutes walking distance to the JR train station. At the completion of competition 10,000 people stream out onto the streets. So there is a rush for taxis, and for the trains. Another alternative is to stay at one of two hotels that are very close to the stadium and station. One is Hotel Bellegrande (3 star) and the other the more modest( 2.5 star) the Pearl. The Pearl overlooks the Kokugikan, fig.9 and is next to the train line.

We could still hear the trains through the double glazed windows of our room, but there are other rooms not facing the train line. Our room was very small but it was air-conditioned, clean, had an en-suite and king sized bed (fig 10), and was very convenient and reasonably priced.