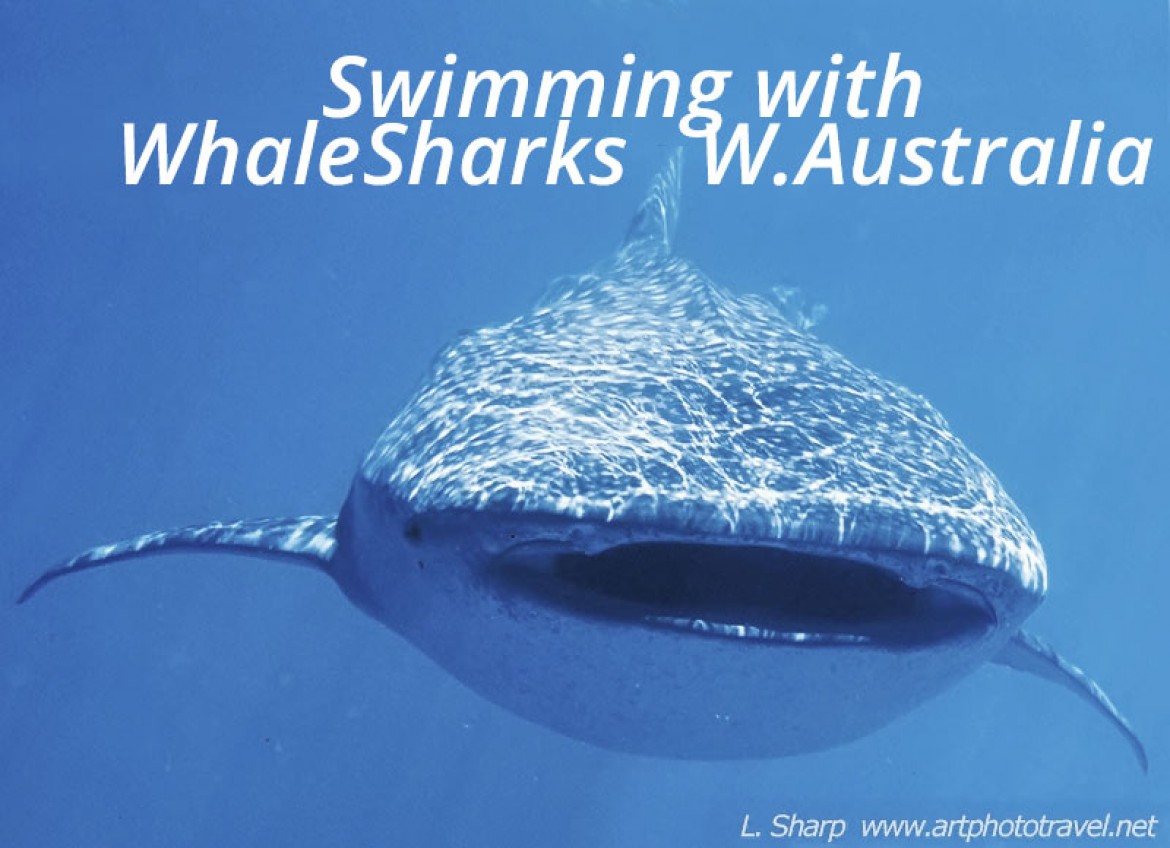 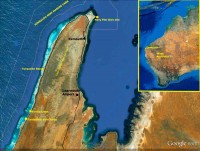 Exmouth in the far north west of Australia is a convenient location to swim with whale sharks. Just off the coast, the Ningaloo reef comes close to the shore, see Exmouth map Fig1. The Ningaloo coral reef spawns two weeks after the full moon in March, resulting in an explosion of plankton and marine life that attract large pelagic fish including considerable numbers of whale sharks.
There are a number of dive companies in Exmouth that run day tours off the Exmouth peninsula to allow swimmers to snorkel with the whale sharks. See the Exmouth visitor centre. Each boat is accompanied by a spotter plane which locates the whale shark and then directs the mother boat to a suitable intersect point. Some boats launch the swimmers directly from the boat but most release the swimmers from a Zodiac inflatable that manoeuvres to a position in front of the shark. The Zodiac then picks up swimmers that have tired or have fallen behind and will again release them in front of the shark. Each mother ship has a strong staff member swim with the whale shark to keep the tour skipper informed of the whale shark’s position. 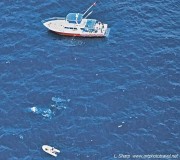 ♦The whale sharks seen at Ningaloo, are predominantly males ranging in length between 4-8 metres, prompting suggestions that Nignaloo may be a juvenile nursery.
♦ The water becomes milky for a few days after the coral spawn reducing water visibility. I have swum during this period, and there were no whale shark sightings.
♦ The water colour is generally green- blue with modest visibility. At times, the water has a pure blue colour with excellent visibility. The locals call it juice. I have swum in both water conditions, and the difference is dramatic (see photos figs4, 5). But I do not know when the blue condition is prevalent, and whether this is a seasonal effect. If it is a predictable seasonal effect, then this would be a major factor in choosing when to go to Exmouth.
♦ The interaction with the whale shark occurs beyond the fringing reef in the open sea but still in sight of land.
♦ The boats are authorized to carry 20 persons, although only 10 swimmers are allowed to snorkel with the whale shark at a given time.
♦ The boats divide the swimmers into 2 groups each taking a 10-15 min turn with the shark.
♦ There is a 45-60 minute time limit imposed on snorkeling with any individual whale shark. There are also other rules regarding closeness to the sharks etc. National park ranger boats are present and will fine the boat captain if the rules are broken.
♦ The tour companies pick up the swimmers from Exmouth, and drive to Tantabiddi  to board the boat. the boat ramp is located on the western side of the Northwest Cape some 2km south of Yardie Homestead Caravan Park.
♦ Most boats begin the trip with swimmers snorkeling on the reef to get comfortable. The boats then have a morning and afternoon session swimming with the Whale sharks. 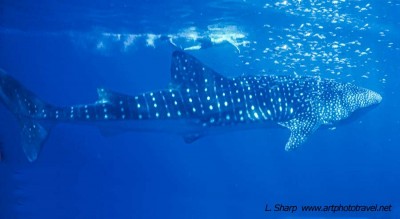 ♦ Ningaloo Reef Dreaming and Ocean Adventure advertise they do not share spotter planes as they have their own and thus provide the longest swim time of the tour companies. I have not used either  company so I cannot comment.
♦ During peak season April-June  The tours fill up and booking in advance is advisable.
♦ Each day tour is expensive around the $380 per person but it is such an experience it is worthwhile going more than once.

♦ Flash is not  permitted. When the whale shark approaches from the gloom everything happens quickly and there is not much time to dive, compose, photograph and keep up with the shark.
♦ Note, my top whale shark photographs are not displayed here, as they are reserved for my book.

Some Other Places to Visit.

♦ Apart from diving or snorkelling on the Nigaloo reef, and swimming with the whale sharks, exploring the surrounding area and the Cape range national Park can be a great experience as it is one representation of outback australia, vast stark, and forbidding. One can hire cars including 4 wheel vehicles from the town or airport. There are a number of pristine bay-lets along the coast to the south.
♦ At Turquoise bay, I witnessed one of the most extrodinay events. Small dogfish sharks were herding bait fish into tight balls, when one bait ball, shot onto the beach like a black snake some 3m up onto the dry sand, and then with the next wave, the fish returned to the sea through this fish tube, until all that remained were a few fish flopping on the sand.
♦ The main coastal road south to Coral Bay  is tarmaced to Yardie creek with gravel tracks to the beach. Thereafter it is a  sandy track passable only by 4wheel drive vehicles.
♦ For divers there is the navy pier, one of the top ranked dive spots in the world. It is a short distance outside the township, but one has to be a certified diver logged a dive within 6 months and be guided by a recognised dive tour company.