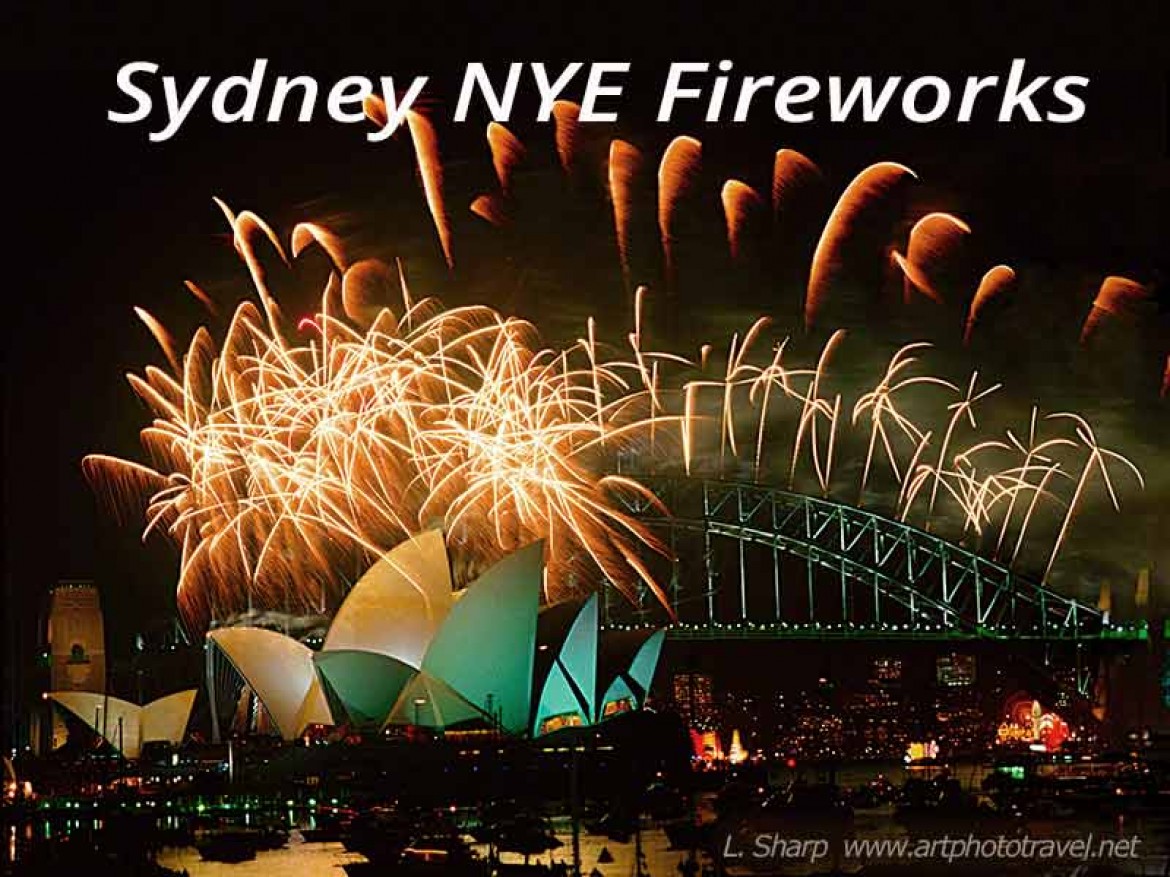 Sydney stages its annual New Year’s Eve fireworks celebration on Sydney harbour around its iconic harbour bridge. With a backdrop of the Sydney opera house and an armada of spectator water craft, the event is regarded as one of the world’s greatest New Year’s Eve displays. There are in fact two firework displays, one at 9pm lasting about 10 minutes and the major spectacle starting precisely at midnight and lasting 15 minutes.  A photo of the 9pm display is shown in fig1. taken from a small park in Dover Heights, whose location is shown by a red arrow in fig2.

There are numerous vantage points on the harbour’s extensive foreshores fig2,

(see also  city of sydney NYE firework vantage points), but there is upward of 1.5 million people competing for the best locations, resulting in most places becoming very crowded or being closed to visitors once the site has reached capacity. The public (free) sites with the most dramatic view of the fireworks are at Blues Point, a small reserve on Lavender Bay viewing the western side of the bridge; and at Mrs Macquarie’s Chair viewing the classical east side of the bridge, Fig4, with a capacity of 20,000 spectators. There is of course a major challenge with access to both places, but in particular with Mrs Macquarie’s Chair as the number of prospective spectators far exceeds its capacity. In fact many people camp the previous night or earlier at the fireworks entrance gate some 800m from the viewing site. The head of the queue at the entrance gate and the back-end of the queue (300m away) are shown 1 hour before the gates open at 10am on the 31 December fig5-6.

1) There are a number of boats and ferries which take passengers for the fireworks display e.g.  see http://www.captaincook.com.au/home.asp. Note, there is a large exclusion zone for boats; shown the map of  fig3.
2) There are also a number of premium land based sites for which tickets can be purchased in advance.

This is a premium location to experience the fireworks and celebrate New Year’s Eve. Fort Denison is a small rock island 1.4Km from the Harbour bridge and within the New Years Eve boat exclusion zone. It is one of the top places to be for the Sydney New Years fireworks display.  When I went it lived up to all my expectations. From Fort Denisons’ ramparts and from its landing pier, I had an unhindered view of the fireworks display, the harbour bridge, opera house and city skyline. I could feel the percussion of the exploding fireworks and hear the whoosh of the Roman candles as they formed a golden waterfall for the climax of the evening. There was no visual obstruction from boats, or buildings etc. The New Years eve party on Fort Denison was relaxed and had substantial personal space  as there was a limit of 150 persons on the island. There was a sumptuous dinner with quality champagne and great wine.
The disadvantages were.
♦It is expensive $1250 for 2015, and has to be booked months ahead. Information at  TE Catering Ph: 02 9361 5208.  Booking  online available at  fort denison New Years Eve.
♦It was difficult to get to the shuttle boat from Campbell’s cove wharf due to the large crowds on the foreshores of Circular Quay even at 5pm, some 2 hours before the boat was scheduled to leave. There was also a lack of instructions as where to go etc. and the local security guards at the boat wharf knew nothing about the shuttle boat.

B) The Friends of the Royal Botanical Gardens

i) Midnight at the Oasis near the Fleet Steps. 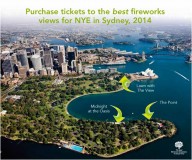 It is a very good geographically located site but being just above sea level the view can be obstructed by masts and lights of  boats that are moored close by. It is also very crowded and the food does not live up to expectations of the menu.
The 2014 price  $385/pp including dinner,  for 2015 contact: royal botanical gardens 2015 NYE

This is probably the most spectacular of the Royal botanical sites. Its geographic location is one of the best possible spots starting just north of the fleet steps and continuing around  to Mrs Maquarie’s chair. However, being just above water level it suffers from obstruction by boat masts and boat lights. There are also tree branches which can obscure some fireworks.  I have sought clarification on whether one is allowed to walk up the grass slope to avoid obstruction by the boats.  I photographed the 2000 millennium fireworks (above featured photograph) from a slightly elevated position from this area.   The 2014 price was $355/pp including food: Contact and booking for 2015 see: royal botanic gardens the point.

iii) Lawn with a view.

ii) The Mare and Foal Lawns at Farm Cove. Its location is fair. All bookings must be made by members . Cost ~$100/pp , see 2015 contact: royal botanical gardens NYE members

♦There are two fireworks displays, a shortened one at 9.00pm, and the full 15 minute display at midnight. A few precursor fireworks may be set off a short time before these displays.
♦Small boats less than 15m tall can anchor next to Mrs Maquarie’s Chair, so if photographing the fireworks, make sure the masts of the boats which can move around do not obstruct your view.
♦The fireworks are launched from a series of barges in various locations in front of, from the sides and from behind the bridge, so the fireworks cover quite a large area, see Sydney fireworks map fig3.
♦If  you get to Mrs Macquarie’s chair get an elevated or protected position for you tripod, e.g. on some rocks so that people cannot block you at the last moment, because it will get shoulder to shoulder.
♦The fireworks themselves are very bright, and it is difficult to find one exposure correct for the bridge, ships, opera house and fireworks. The further the vantage point from the harbour bridge the more difficult this becomes.
♦Most hotels close to Circular Quay, will require a minimum stay of 3 to 5 nights and/ or increase their rates (some dramatically) around this time.
♦It is a great spectacle, involves a lot of hassles, but in the end well worth the effort.

♦Best place for unhindered view: On jetty near first pylon.
♦Best lenses:
i)16-35mm to include bursting fireworks and opera house and harbour bridge. But opera house is too far detached for intimate composition. Best vantage point for including Opera house and harbour bridge during fireworks is at Mrs Macquaries Chair.
ii)35-7mm zoom. This gives good view of the bridge and fireworks near bridge ( ie the waterfall) but the star burst fireworks are out of the frame as they are above you.
♦ Tried fisheye 8-15mm,but bridge too small.
♦Exposure examples. ISO at 800. For the not too bright fireworks 2-3 secs F9 to get image bridge. For general exposures 2-3 sec at F11. For the very bright fireworks need to go up F22 not to overexpose fireworks and extend exposure to 5 sec to expose bridge.