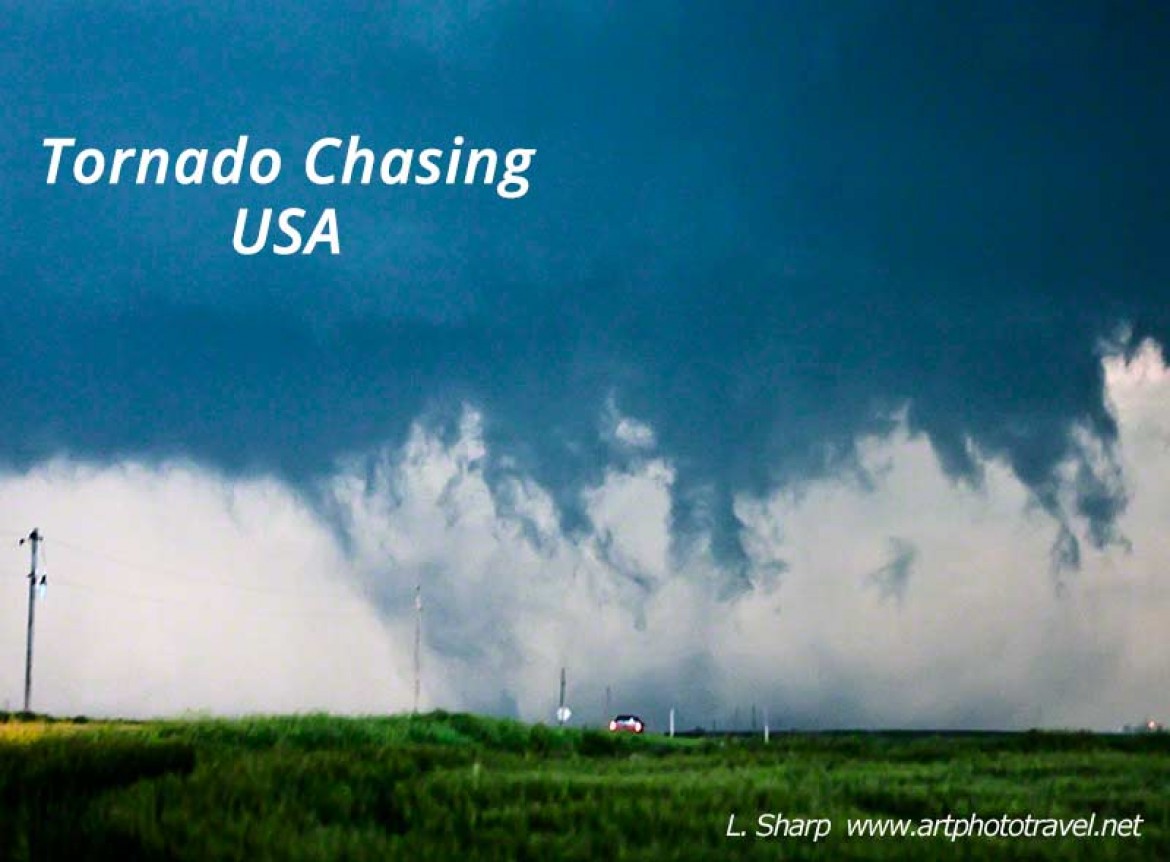 Tornado chasing on the Great Plains of America can be described as mind bending boring punctuated by short bursts of near panic and utter exhilaration.

I have storm chased in the USA on four separate occasions, and now feel the need to go again. Each 10 day tour covered some 5,000 miles, and when the weather was balmy, it was mind-bending boring. But when the sky turned dark, and the monsters were unleashed, the environment transformed into one of the most dramatic and exhilarating visual experiences of a lifetime.

One might think that after witnessing a tornado at close range and feeling the roar on one’s chest, that the experience would bring satisfaction and fulfillment. And it does, but not for long. For as soon as the excitement abates, and normal composure is restored, the urge to start storm chasing takes hold. Gone are the memories of frustration and boredom, replaced by the certainty that, with a little more perseverance and effort, the next tornado will be even better.

Impressions of a guest storm chaser.

I was surprised(1) that a super cell capable of spawning tornadoes could form in bright sunshine under a clear blue sky. This frequently occurred along a dry line, where cold, dry air intersected warm, moist air, generating puffy white cumulus clouds. Weather conditions that I thought were perfect for a family picnic or outdoor barbeque, rather than the harbinger of a dangerous storm that would bring destruction and terror to a whole region.

But I was wrong, for a few hours later, the sky darkened, and a storm 10-20 miles across was spawned. As the storm intensified a rotating super cell materialized, parts of its body in turmoil, boiling and churning, and at its core a mouth that sucked in the moist air. Facing the beast, I could feel the updraft pushing forcefully against my back. Then from inside the maelstrom an ominous black cylindrical Wall Cloud, would descend towards the ground, only to retreat back into the body, and reappear at a different location. From time to time, a spindly finger emerged from the wall cloud searching for the ground, and when contact was eventually made, the cry” Tornado on the ground” reverberated through the group.

Most storm chasing in the USA is confined to the Great Plains, where tornadoes are easily visible, and where there is an extensive network of straight roads that make it relatively safe to chase by cars. Few tour companies will chase in hilly or forested areas where the tornadoes can be hidden and where winding roads may hinder escape.

The two main storm chasing regions are Dixie Alley in the south, and Tornado Alley, in the north (Fig2). During the early season from March through May, the tornadoes are more prevalent in the southern region, where they tend to be larger and more powerful than their counterparts in the north. Here, the storms move quickly reaching speeds of 40 to 60 mph, making the chase difficult. On the other hand, weather conditions suitable for tornadoes can reform quickly, increasing the probability of seeing tornadoes over a number of days.
Later in the season, May through August, the centre of activity moves north into Tornado Alley, where the tornadoes now tend to be less intense, take on a more classical shape and the storms move more slowly making them easier to chase. However, favorable conditions for super cell formation take longer to reestablish, so in order to experience a tornado, the average tour will need to be of longer duration.
In response to this seasonal change, a number of tour companies move their base city between seasons from Oklahoma City in the south to Denver in the north.

♦ One of the most important considerations in choosing a tour company is the experience and professionalism of the tour leader. He must predict the likely regional location for tornado activity the day before, drive to a suitable standby location to allow for last minute changes in the weather; navigate to intersect the storm close to where a tornado can form and choose a close and safe viewing location from where the tornado can be clearly visible and not hidden by the accompanying rain or hail.

♦ Many tour companies use 14 seat commuter vans, with 4 rows of passenger seats. A few companies will fully load the vehicle with 12 guests, but most companies limit the number of passengers to 8 with a spare space per row. Even so, the seating is cramped and becomes quite uncomfortable for long journeys particularly if the vehicle averages 400-500 miles per day.
I don’t like these vans as:-
♦ Movement in and out is restricted, particularly during high activity requiring rapid exit and entry.
♦ External visibility is limited, especially when looking forward through the front windshield. Passengers in the back rows may not see a tornado that is easily visible to the driver and first row passengers.
♦ Most side windows do not open. Photographing through these windows is difficult as dirt and water stains build up on the outside of the window and the glass distorts the image. Tinted windows are even worse as these introduce additional optical distortion and cut exposure.

Fig9 Third in line in the convoy. Tiptin tornados

♦ It is vital that the tour company rotate the passengers in a fair manner, otherwise some people will hog the front passenger row in the first vehicle of the convoy causing tension within the group.

The Number of Chase Vehicles.

♦ Some tour groups chase in a 1-3 vehicle convoy. Apart from the intrinsic danger described in story 1, the first vehicle will generally procure the best viewing position and have the longest viewing time when the convoy is stopped (eg.fig9).
♦ Not all vehicles in the convoy may have the full complement of storm chasing technology, relying on the first vehicle for that information. If a communication problem arises, this may affect the passenger’s experience (i.e. not get to see the tornado as without radar the route could be too dangerous) or could even put passengers at risk during a dangerous situation.

There are a number of tour operators that will provide an experienced storm chasing guide to accompany you in your own self drive car or rented vehicle. There are two issues with this variant.
♦  If there is an accident or if the car is damaged by hail,  you could be responsible for the damage and any injury.
♦ At the height of activity when maneuvering close to a tornado, the guide and the passengers could be having a fabulous time, while the driver has to concentrate on the road and safety instead of taking fabulous photographs.

♦ A top professional storm chaser guide in an SUV chase vehicle.
♦ A list and comparison of USA storm chasing tour operators is provided by  Stormchasing USA .

1) Our tour leader was one of the very best. “I will never go into the mountains”, he proclaimed! But it was an uneventful, nondescript day on the plains, and there was a tornado warning for the mountains. It was more than he could bear and before long were creeping along a winding misty mountain road with trees close on either side. “What am I doing here?” He spurted out in self admonishment. “I know there is a tornado around, I can sense it from the leaves” he explained to a hushed van. “There, just up ahead to the left, the tornado is coming towards us over the tree tops”. However, sitting in the third row I could not see it. “Go quickly, we can beat it” he ordered our driver and the other two following vans. There was no real danger for our vehicle, but it would be a close thing for the last van in our convoy. But they were not the only storm chasing cars following us. And these other cars were in danger.
Often, storm chasers (see live streaming on  ChaserTV) will broadcast their GPS position, so their storm report to the television stations can be automatically linked to a map location. Less experienced storm chasers or those coming late to the area will follow the GPS signal of the top professionals to get into a superior viewing position. But as the above example demonstrates it has its risks, as the leader is not responsible for unauthorized hangers on. Or is he?
2) We were cruising down the deserted main street of Amarillo in Texas, as the tornado sirens wailed their warning. Over the radio, a computer voice was updating the storm watch, but our Doppler radar showed no tornado signature. We were all relaxed and feeling good, until the tour guide looked behind and saw a white curtain rapidly approaching with trees flying into the air and flashes of electric arcs. “The hail downdraft is driving towards us” he gasped, “Quick get the van behind the supermarket “he pointed to the driver who gunned the van into the parking lot. But when we got there, there was no room as it was filled up by other cars also seeking protection. “We got to get out of this town NOW” he shouted, “Go, Go. “Hail precursors were pop popping on the van as it sped down the main drag, when suddenly the driver slowed for a red light. “Are you crazy” the guide screamed at the top of his voice now visibly shaken, “This is a life and death situation”. Later when we were out of danger the tour leader explained. The baseball sized hail was being driven horizontally at 80 mph, fast enough to break through the windows and fill up the van, smashing all of us inside with dire possibilities. The next day we drove slowly back through the town. All the parked cars had their windows smashed, and their body works extensively dented by the baseball sized hail.

♦ Often photographing the tornado takes place under frenetic conditions near dusk, with little time to get into position and compose. This situation can be ameliorated by having two hand held cameras, one with a wide angle zoom, the other with medium telephoto zoom and an optional extender placed in a pocket. As lighting is generally poor to dark, cameras that can produce low noise images above 1600 ISO are desirable, such as the new Canon 1DX and 5dmkIII, and Nikon D4 and D800.
♦ Tripods are useful when there is an extended stop, but I would opt for the above solution as this allows moving quickly to a good viewing position to avoid obstacles, to cross roads, to compose the image to include people in the frame, etc.

(1)Another surprise was that, under the Super cell near the horizon, the setting sun could still shine inside a thin strip of blue sky.