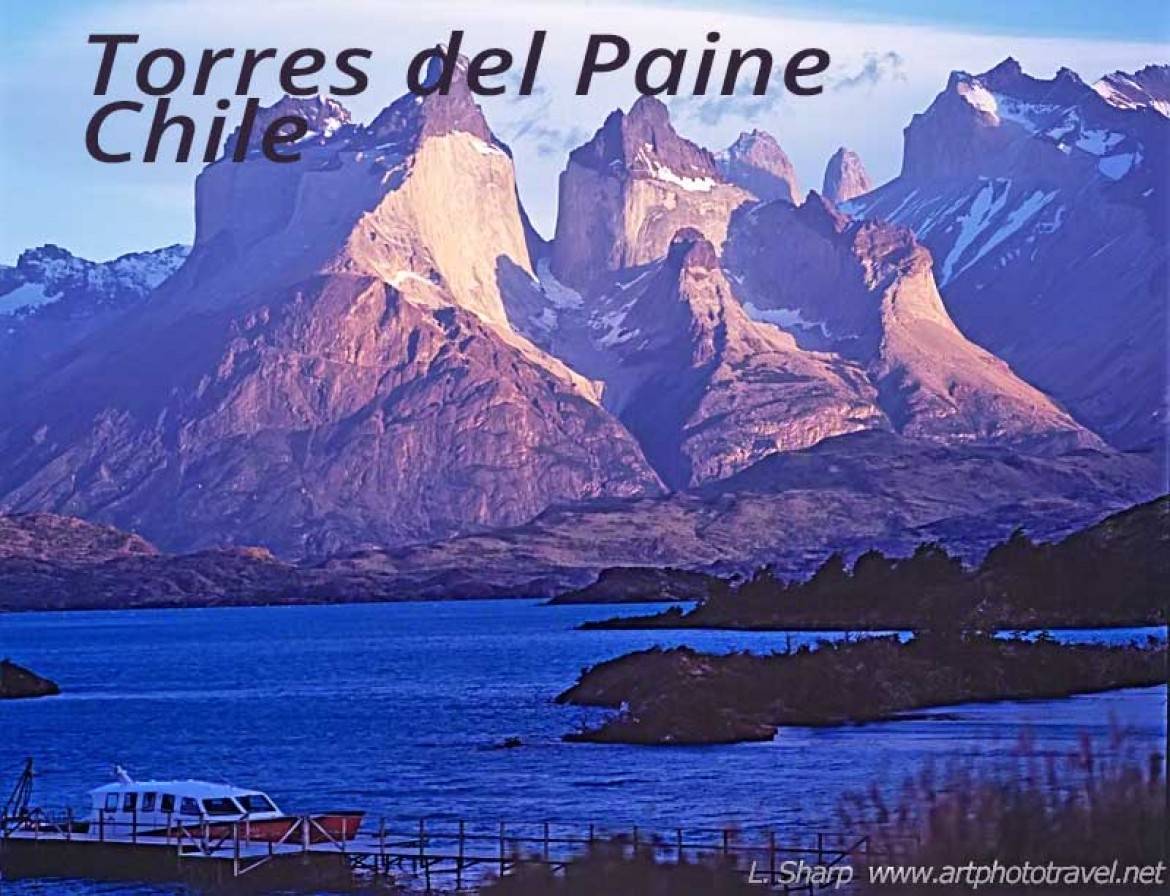 The Torres del Paine is a granite massif, often covered in snow and shrouded in cloud, that is amongst the world’s most spectacular landscapes.

It is a 5 hour journey by transfer car from the Calafate airport in Argentina and a 5-6 hour trip by car or hotel minibus from the Punta Arenas airport in Chile to the Torres Del Paine national park in Patagonia.

This is the quickest and most convenient way to get to the park. Most of the journey passes through open bushy scrub-lands and rolling grasslands with the occasional sighting of small herds of Guanacos. But once inside the national park the landscape becomes more dramatic with the Cuernos del Paine massif (and the partially hidden three towers, the Torres del Paine) dominating the surrounding low mountains and lakes like a fist that has punched through the earth’s crust. It is a remote and spectacular region with the feeling of isolation and foreboding heightened by the weather; unpredictable, cold even in summer with overcast skies that part only occasionally and a chilling persistent strong wind that blows from the west.

Inside the park there are two hotels that are close to and have direct views of the Cuernos del Paine massif fig1, the Hosteria Lago Pehoe http://www.pehoe.com/ situated on its own small island linked by foot bridge to the mainland, and the 5 star hotel Explora http://www.explora.com located a short distance away on the high ground overlooking a gorge and Lago Pehoe.

fig3 The Cuernos massif from the vantage points shown on map.

♦The dominant weather pattern for summer is overcast skies, with rain, snow flurries and wind with short periods of sunshine. During my 8 day stay in late January 2007 there was one full afternoon of sunshine with puffy clouds, 5 other short periods of sunshine with broken cloud and one 3 hour period at dawn of clear blue sky with scattered wispy cloud, which turned out to be the ideal photographic condition. My cousin who was there 4 days previously experienced only cloud, fog and drizzle, so to view the Cuerno Del Paine massif in all its grandeur you should expect to stay for some days.
♦Sunrise in January is about 5.30 am. So to photograph the Cuernos Massif near sunrise, it is necessary to be position 30 minutes earlier as the sky and the colour on the rock pillars can change rapidly during this time, as can the weather. 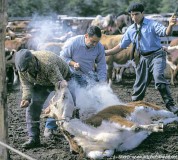 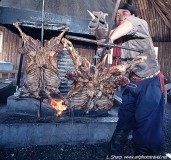 ♦The classical “close up” dawn photograph of the Cuernos Del Paine can be captured from near the Hosteria Lago Pehoe or just outside the Explora hotel, using a telephoto lens. My image (reserved for my book and not reproduced here) was taken with a 300mm lens and medium format Hasselblad camera on a tripod by the hotel building.

I scouted numerous other vantage points by clambering up to the crests of the hills along the main road opposite the Cuernos Del Paine. The vantage points were considerably closer to the massif than from the hotels, but these locations did not provide the same dramatic perspective of the central Cuernos massif fig3.
♦Booking the Hosteria Lago Pehoe during the peak summer season should be done a year or more in advance.

♦The Hotel Explora has only 4 and 8 day fixed packages inclusive of all activities. These excursions include guided hiking trips, horseback riding and other outings that range from the physically difficult to a being a passenger in a minibus tour of the area ending in a patagonian barbeque lunch fig4.
♦The Explora has its own working 6,000 hectare ranch some 53Km from the hotel which guests can arrange to visit fig5.