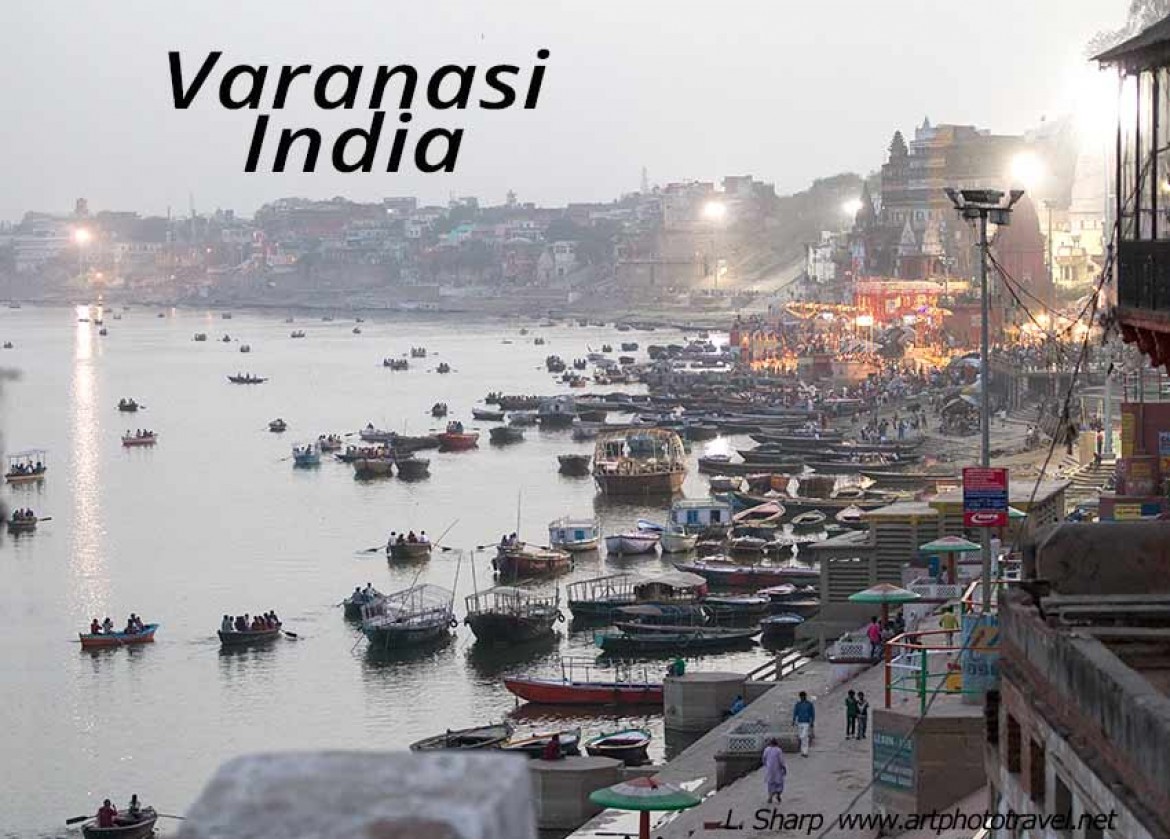 Forty seven years on, and our recent trip to Varanasi felt the same. Of course, the population has increased and new suburbs have expanded outward since our first visit, but the old city, the crowded Ghats along the river, and the ominous haze from the burning pyres generated the same powerful, emotional impact.
At the Dashashwamedh Ghat, there was frenetic activity; boatman were touting for rides, the faithful were cleansing their bodies in the holy river, barbers shaving  heads, holy men dispensing blessings and offerings, astrologers reading horoscopes, stray dogs scavenging the banks in packs, and beggars sought alms and charity along the entrance road.  All this humanity was clothed in a medley of brilliant reds, yellows and whites, the iridescent colours contrasting with the pastels of the surrounding buildings and the dull blue-grey of the river itself. Along the western bank of the Ganges, the old city extends backwards some two kilometres in a maze of narrow alleyways and lanes.

It encompasses the ancient residential quarter, some tiny shops and temples, a few local markets and a Muslim section housing a cottage industry weaving the finest silk. The closely packed buildings protect the lanes from the harsh sun keeping the alleys cool and dark. Walking the lanes is certainly fascinating, presenting a view of former times, although many of the buildings are in a state of disrepair, and in places, the lanes are dirty from household refuse left in the open.

Around 7pm in the early evening when the sky darkens, two greeting ceremonies are performed on the podium overlooking the steps of the Dasaswamedh Ghat, and at the water’s edge at the adjacent Sheetla Ghat. The former involves 7 white robed priests and the later 5 priests. The Aarti ceremony celebrates the five tenants of the Hindu faith, Air, Wind, Fire, Water and Earth by presenting offerings to the gods. It is a spectacular, visual, must-see event.

Some observation for the Aarti at the Dasaswamedh Ghat

♦ Both Aarti sites are usually packed.
♦ Many spectators take a boat cruise along the river before viewing the Aarti from their boat tethered offshore.
♦ As the  Aarti on the Dasaswamedh Ghat  is performed from an elevated position, it is my opinion, that the boats do not offer the best viewing location, as the boats need to be anchored some distance away for the ceremony not to be obscured by the sides of the platforms.

♦ Visitors can observe the ceremony from  first storey balconies for a small fee. Although the balconies offer an unobstructed panorama, they are located some distance back from the stage.
♦ The best viewing and photographic positions (the seats are free) are from the first row  closest to the priests (on the steps or wooden platforms), and of these, the premium locations are near the  first priest  on the left when facing the river. Note the actual corner seats near the passageway can be blocked by latecomers who push forward in order to see the ceremony. To gain the best seats, you should be seated 1.5-2 hours before the start.
♦ Another popular photographic position is between the podiums (Fig8. Can see location Fig7), where it is possible to stand very close to the priests without causing obstruction. Access is by footpath directly below the wooden podiums facing the river.
♦ Note, my top photographs are not published here, being reserved for my book.

♦ Cars can park close to the Dasaswamedh Ghat before 9am. After 9am the car park and access roads are closed to traffic and cars must park at an official car park some 20-30min walk from the Ghat (see Fig1). So for the early morning boat ride one can be dropped off close to the Ghat, but for the Aarti, one has to walk from the official car park to the the Dasaswamedh Ghat.
♦ The Dasaswamedh Ghat is a 20min taxi ride from the centre of town.
♦ At the conclusion of the Aarti, there is a major rush up the steps to the road. The 20min walk to the official car park at night  is through exceedingly crowded and dimly lit streets (daytime view fig9). The crowd is often shoulder to shoulder, and the traffic at the intersections nothing short of chaos. The air is filled with car and motorbike fumes that sting the eyes and burn the throat. To avoid the worst of the crush, you should  leave the Aarti a few minutes early.
♦ The courtyard of the Nepalese temple provides a magnificent panorama of the river and Ghats.
♦ Another panoramic river view can be obtained from the restaurant on the top floor of the Ganpati Guest house.
♦ I found the period, just before dawn when the sky was starting to colour, and the Ghats were still illuminated by incandescent lights, to be a magical time for photographing the Ghats. In March, this was between 5:15 and 5:45am. 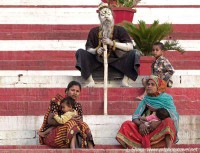 Fig11.Bathing at the Dasaswamedh Ghat

♦ I found hiring a private guide particularly helpful, although it was not essential. Private guides can be obtained from the local government tourist office at Varanasi Cantt, Railway Station. http://www.up-tourism.com/. Email: upstdc@up-tourism.com. Also, most Hotels can organize an official guide and Sankrit Tour Zone can organise a private guide as well as private boat ride and transport.
♦ The airport is a 45 minute drive from the centre of Varanasi.