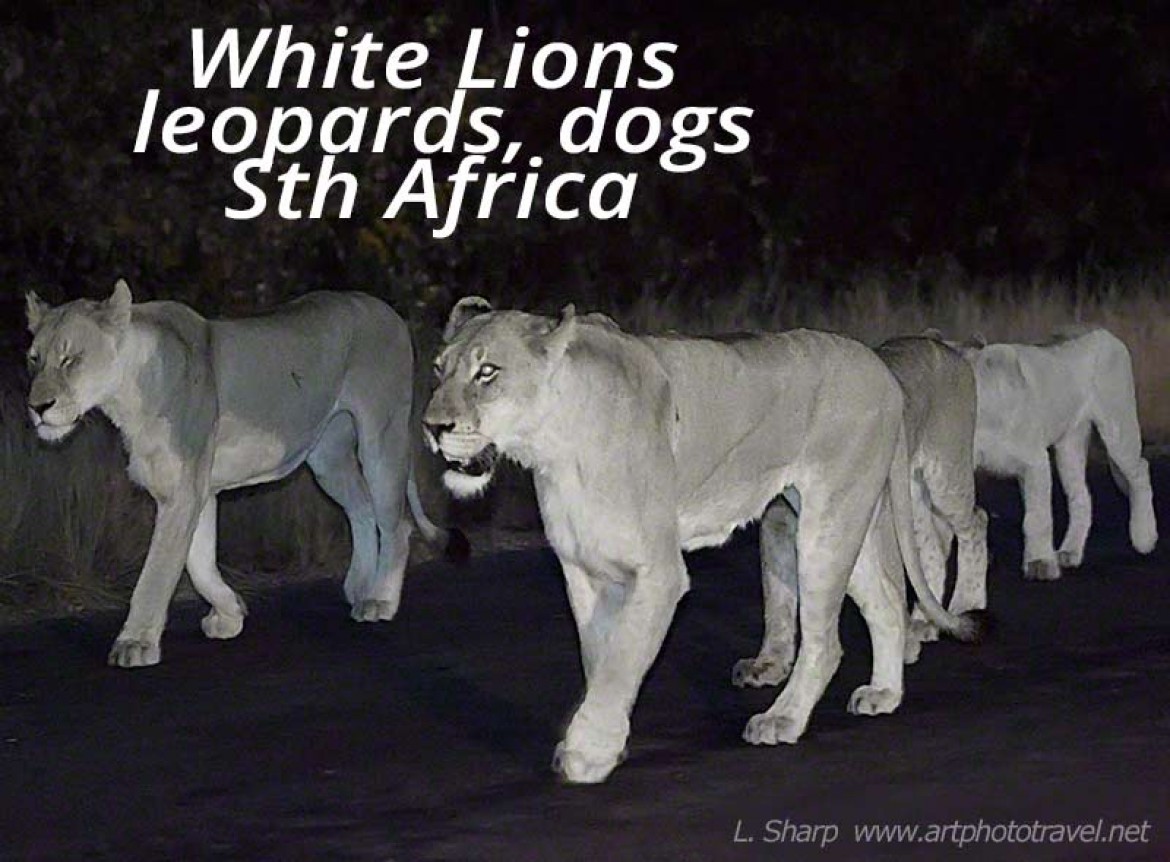 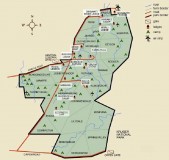 The only well known pride of White lions in the wild, resides in the Timbavati game reserve Fig1 where it was reintroduced in 2003 in the Motswari sector. The pride has since been observed at adjacent lodges and as far south as Umlani. See fig2.
As leopards are shy and difficult to locate, a reasonable population density is important to ensure sighting success. The highest density of leopards in the Timbavati is again in the northern sector.
African wild dogs are both scarce and constantly on the move ranging over a large hunting area.  Fortunately, five of the Timbavati Private Safari Lodges have pooled their concessions to provide a shared traversing area up to 20,000 hectares, (200 Km2) Fig3. Although this traversing area is not completely contiguous, due to scattered private farms and private shared blocks that prohibit access, the traversing area is sufficiently extensive to follow a wild dog pack for a few days if the dogs are present in the region. An additional consideration is the number of cars on safari within the traversing area, for some fraction of these vehicles will drive to the same subject, resulting in a car queue that will effectively limit the time one can spend with a particular animal.

With these factors in mind I chose the Motswari Private Game reserve located in the northern most part of the reserve.  I am not sure if I had moved further south it would have been any better.

As it happened there were queues for the white lions and wild dogs on 5 occasions during my 7 day Safari. Nevertheless for most of the time there were no other cars and I was able to get images as good as I was capable of producing.

Saw the white lions on four occasions.
Twice there were car queues. Most of the time they were resting but around 4pm Figs4,5 they became active and went into dense bush. The fourth occasion was before sunset with no other cars. We followed them for a kilometre onto the main tarmac road where they rested on the warm tarmac. Then as it got dark they walked down the centre of the main road like a set of white ghosts. Got a great image of the pride in the twilight walking in formation down the road. Not published here as reserved for my book. On the 4th day they moved northwest onto the Ingwelala shared block and were essentially lost. 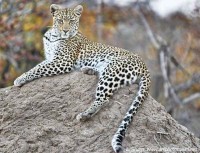 Fig6 Leopard on an anthill

I saw leopards every day, in a number of different locations. One of my objectives was to obtain an image of a leopard’s eye with the reflection of the car in its iris. Took a lot of attempts but in the end I was successful. Image not shown here, as reserved for my book. Also wanted to get mother cub interaction, but that was not to be. Closest was a cub up a tree feeding on an impala. This image also reserved for book.
Got many leopard portraits including a leopard on top of an anthill Fig6.
Two interesting leopard encounters. We saw  one skittish leopard up a tree with it’s kill, when  it suddenly jumped down and hid in bush. As the car approached, it charged the vehicle Fig7, veering off into the bush at the last moment. The action took both guide and tracker by surprise, and, as the blurred image show, I was barely able to get the camera up.
On another occasion, the Guide and tracker sensed there was a leopard nearby and stopped the car to scan the bush. Suddenly I noticed a leopard right behind the vehicle. It paused and sniffed the rear right tire, and then it continued around the car and walked unconcerned under the feet of the tracker sitting exposed on the small seat out on the front of the car. Later the guide explained. When the leopard sniffed the tire it determined we were no threat and not food, and as it did not sniff again it regarded the tracker and the vehicle as the same object it had already examined. The Tracker added “I was aware of the leopard.  I did not move and I did not look at the Leopard”. It was an interesting moment.

We saw wild dogs on three days. Most of the time the pack was on the move through bush and it was difficult to get a clear image, such as the time we followed them as they chased an Impala through the scrub and over a dirt road  but the action was chaotic and no good image could be obtained. Nevertheless there was ample opportunity to photograph the pack in the open  such as when they were on a dirt track eg. Fig8. or in a small clearing as seen in Fig9,  tormenting buffalo.  There was one occasion when we  stayed with the group as they rested under a large rock outcrop. Some of the pack had a successful kill and were returning to the pack and were greeted with begging rituals and attempts  to induce them to regurgitate food. After 2 hours a car queue formed and we had to move on.

Fig10 Elephants outside our room

♦ All the Timbavati private safari lodges provide a high standard of accommodation and services and between 6-8 hours per day of  Safari driving off road (see the various reviews on Fodor’s forum and Tripadvisor). Motswari certainly conforms to this standard, Fig 11-13 with costs in the middle of the Timbavati  private lodges’ range.
♦ I enjoyed the morning teas in the bush Fig13.
♦ We had sightings of many other game including lion, buffalo, giraffe and hippo, but this was not my priority as for lion-buffalo interaction I went to Duba Plains, for elephant to Etosha, for plains animals to the Masai Mara. Nevertheless I was hoping for an opportunistic image from any animal. As it happened there was only one; a giraffe running with this little Oxpecker flying just behind its head.

Fig14. White rhino on the track.

Fig13 Morning tea in the Bush

♦ On the first afternoon we saw a large White Rhino. Fig14. I would have liked to follow it for some time as I hoped I might get a photograph of the Rhino with Oxpeckers on its head, or better on its horn. But being in a shared vehicle the group preference was to move on.

♦ Consequently, as a photographer I booked the private use of the safari vehicle for the following 6 days at an additional cost of R2000/day. This allowed me to set the safari times (within an 8 hour day) determine what game and type of interaction was to be the priority, set the time to spend at a given place subject to the 3 car policy, and be able to move around the vehicle and to position the vehicle for the best view.

♦ The most used lens was a 500mm F4, then a 70-200mm F2.8 zoom. On occasion I extended the 5000mm with a 1.4 extender. For stability I used a Gitzo carbon fibre tripod and a homemade gimbal that allowed separate horizontal and vertical adjustment.
7) The general landscape for the northern Timbavati is undulating Mopane bush bisected by narrow clearings around sandy creek beds, and some open woodlands. It is ideal habitat for leopard, but visually scrappy and difficult to get mood style photographs.