What impact Royal Henley has on your psyche depends in part on the enclosure of admission. In the Regatta enclosure, (the rump section on the downstream side of the Royal Henley grounds, open to all on payment of an entrance fee), the atmosphere is one of experiencing a world class rowing event at close quarters. There is the added curiosity of watching a menagerie of boats from steamers to dinghies cruise up and down the river spotting the Blazerati and Glitterati of Royal Henley.
The Stewards enclosure has a wholly different persona. Here, you are immersed in English high society reveling in the trappings of an Edwardian garden party. It is like being on another planet; both fashionable, and bizarre, with silly hats and garish coloured blazers. An eccentric place of privilege, hierarchy, archaic ritual, and gentlemanly behaviour.  This is all interwoven with a serious sport side, where international standard athletes compete in a premium event on the World rowing calendar.  It is all just a little over the top, and a great place to experience the excitement over the final reach of the rowing course. 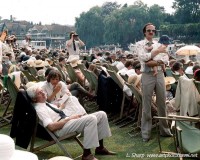 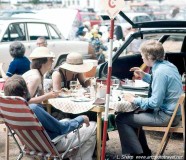 Some Must-do at Royal Henley.

♦ Drink Pimms with lemonade from the marquee bars.
♦ Have a picnic of lobster, strawberries and champagne in the car park next to the open boot of your car.
♦ Wear a blazer or lounge suit and tie during the midday sun.
♦ Sit in a deck chair preferably a few rows back where you can’t see a thing and if possible fall asleep.

When I went in the late 70’s, I was fortunate to have an invitation to the Stewards enclosure from my association with Oxford University, which included an invitation on board the umpire’s launch that accompanies each race down the course. ” And which crew are you supporting?” the driver asked me halfway down the course. ” Radley” I replied, relieved that was able to recall the name of a team, “that was rather slow” replied the official with the silver badge hanging from his striped blazer. 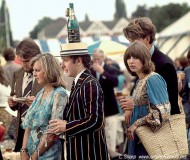 Fig5. The race from the umpire’s launch

However, this time I made a crucial error, booking a ticket three months in advance and finding on arrival that it was for the Regatta enclosure and not for Stewards. So my previous experiences could not be relived. The regatta enclosure was pleasant enough, but as I do not follow rowing, it did not provide the social impact that I was seeking, and I now believe that it would be better on one of the tour boats or other hospitality packages available on the Buckinghamshire side of the river, such as a Fawley Meadows hospitality package offered by Keith Prowse with an upgrade to the Stewards enclosure. http://www.keithprowse.co.uk/rowing_fawley-meadows-hospitality-packages.aspx. 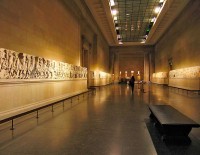 I have always been fascinated by Egyptian Antiquities and Pharaonic times. A decade ago, we visited the Pyramids and took a tour of the Cairo museum. After the guide fended off a few of my questions, he turned to me and acidly replied ” If you want to see the originals you should go to the British Museum”.
So here we were jostling with the crowd to get a clear view of the Rosetta stone, the stelae that was instrumental in deciphering Egyptian hieroglyphics. It was the artifact I particularly came to see, not that I would be able to read it, but to see in person the inscriptions that led to our understanding of the pomp and grandeur of the Pharaohs. Then we wandered through the Egyptian statue  gallery and other rooms filled with treasure from many lands. Finally we ended up in the hall with the Elgin marbles, the classical sculptures that originally formed part of the frieze of The Parthenon in Athens. It was all terribly impressive, just as I remember. I was surprised that admission was still free to this immense collection of national treasures.

Abingdon claims to be one of England’s oldest continuous, living towns, with the 7th century Benedictine Abbey, now largely destroyed by Henry VIII, having controlled the crossing over the river Thames. It was historically a provincial market town, with an open air livestock market for cows and sheep near the river. It was  the centre  of the MG car assembly plant, the dormitory town for the Research centers at Culham and Harwell, a commuter town for Oxford 8 miles away, and a regional centre of cultural activity. There was the annual fair with its Morris dancers held in the centre of town where farm workers came to seek regional employment, and the Royal bun throwing ceremony, where specially baked fruit buns were thrown from the top of the old county hall to townsfolk gathered in the square.  The bun throwing ceremony is still observed on special occasions, such as the Millennium and the royal wedding of Kate and William, and more recently for the Queen’s Diamond Jubilee, although it rained heavily on this occasion. I attended the bun throwing ceremony in 1974 marking the end of the borough of Abingdon, and in 1977, for the Queen’s Silver Jubilee.
As the region’s population grew, traffic through Abingdon became a serious problem and the town centre was modified, an inner bypass was constructed, a small shopping plaza added, the open air market replaced with a car park, the fair cancelled, the residential areas expanded, and many of the shop front facades modernized. So, much of the historic charm and character has been submerged, to accommodate the pressures of modern times.
I drove into our former estate where we lived for 10 years. It was located across the inner ring road from the town centre and hidden behind a stone wall. It still had the same laissez faire ambiance, but  felt quieter now, as its residents had aged and become grandparents or had passed away. We had lunch with my former friends and exchanged pleasantries. It was good reminiscing. We jumped over the wall as my children did and wandered through the  town centre hoping to rekindle some ghostly acquaintance, but none materialized. The town was now populated by a new generation.

A visit to my former reseach establishment at Culham Laboratories. 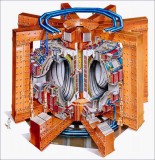 My professional career was as a research physicist into fusion energy, the future clean energy source for baseload power, projected to come on line around 2050. It harnesses the same process that powers the sun using hydrogen isotopes derived from sea water. Scientific feasibility was demonstrated in 1990 in the Joint European Tokamak (JET) Fig10, located at Culham, with the research now entering the engineering feasibility stage, as part of the international project (ITER) being built in southern France with a budget of 7 Billion dollars.
This is a major deal for our energy thirsty world, as Fusion could provide vast amounts of energy with each power station having a small footprint, negligible greenhouse emission, and in case of malfunction, it is intrinsically safer than the nuclear stations. But there is still a long way to go and economic viability is still not assured.
The research in Culham was still superb, but budgetary constraints have markedly slowed progress and the excitement and buzz that was in the air during its heyday as the leading world fusion establishment had all but dissipated. Culham seemed to reflect the mood of the general population.

When I lived in the UK there was a feeling of great optimism, and during the Queen’s Silver Jubilee the street parties also celebrated the high standing of Britain within the community of nations. It was a exciting time to live in Britain and its people treated us with more deference that we Australians deserved. It was part of their world view, in which the aurora of the British Empire still permeated their consciousness, and although they were no longer masters of the world they still garnished respect. They had started the industrial revolution and during the 70’s they still were the most innovative and technologically advanced thinkers in the world. Their approach to science was first rank, and their education led by Oxford and Cambridge were the best. As these still are. And their villages so interesting and different, each with its own character, and history and tradition, isolated in part by the small winding roads contributed to the myth of the English way of life. So driving through the countryside was a journey of exploration and wonder.
A lot of this has changed. In hindsight, I think Thatcher started the metamorphism, by reducing state resources on manufacturing and technological innovation, and encouraging the expansion of Britain’s financial services. This as we now see, bred a harsher and more competitive world outlook, it reduced diversity across all areas in the quest for monetary efficiency including culture and tradition and town planning, and when the Global financial crisis hit, Britain was hit hard. England is still a significant player, it is still a great place to visit, a land of villages and tradition, and in parts as eccentric as ever, but there is a difference, the confidence and ebullience are now more subdued. On the other hand, royalty with its sense of pomp and ceremony still generates a universal feeling of grandeur and pride that has remained undiminished over the decades.