Part 1. Oxford and the Cotswolds.

This was our first extended visit to the Oxford region since I left my research establishment near Abingdon, 34 years ago. At that time, Britain was one of the foremost technological and scientifically advanced countries in the world. It also had a rich, traditional heritage, full of pomp and ceremony and its country villages oozed old world charm.
So going back to my old stomping grounds near Oxford was not only to see how the region had fared to the global challenges, but also to see if that special feeling we experienced in being part of the English way of life for 10 years still remained. My other object was to see if any of my former colleagues were still employed and to reestablish contact with our old friends in Abingdon and London. I also wanted to be a tourist and revisit some of the top tourist places, and visit a few good English restaurants. 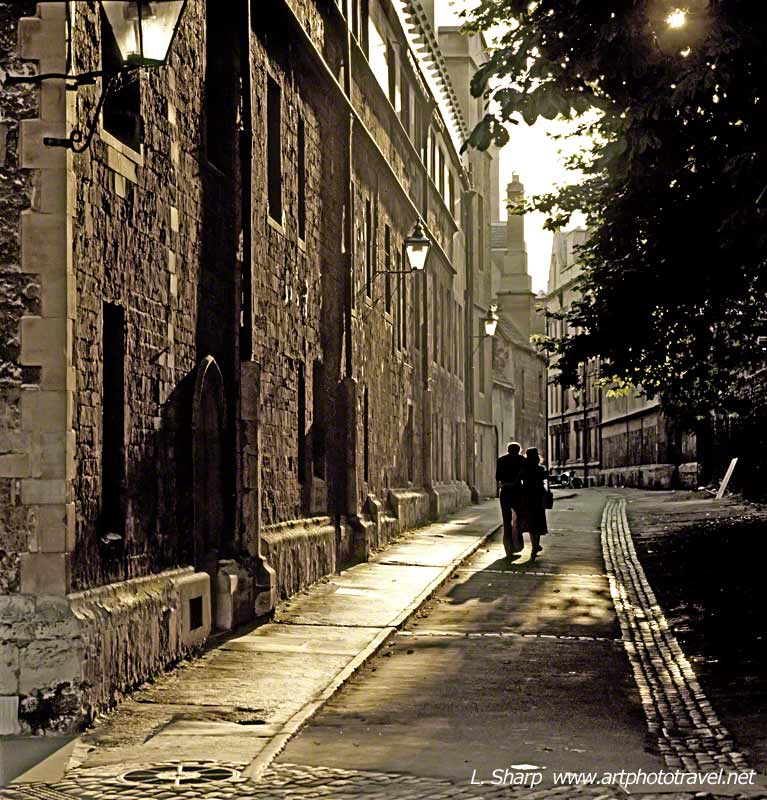 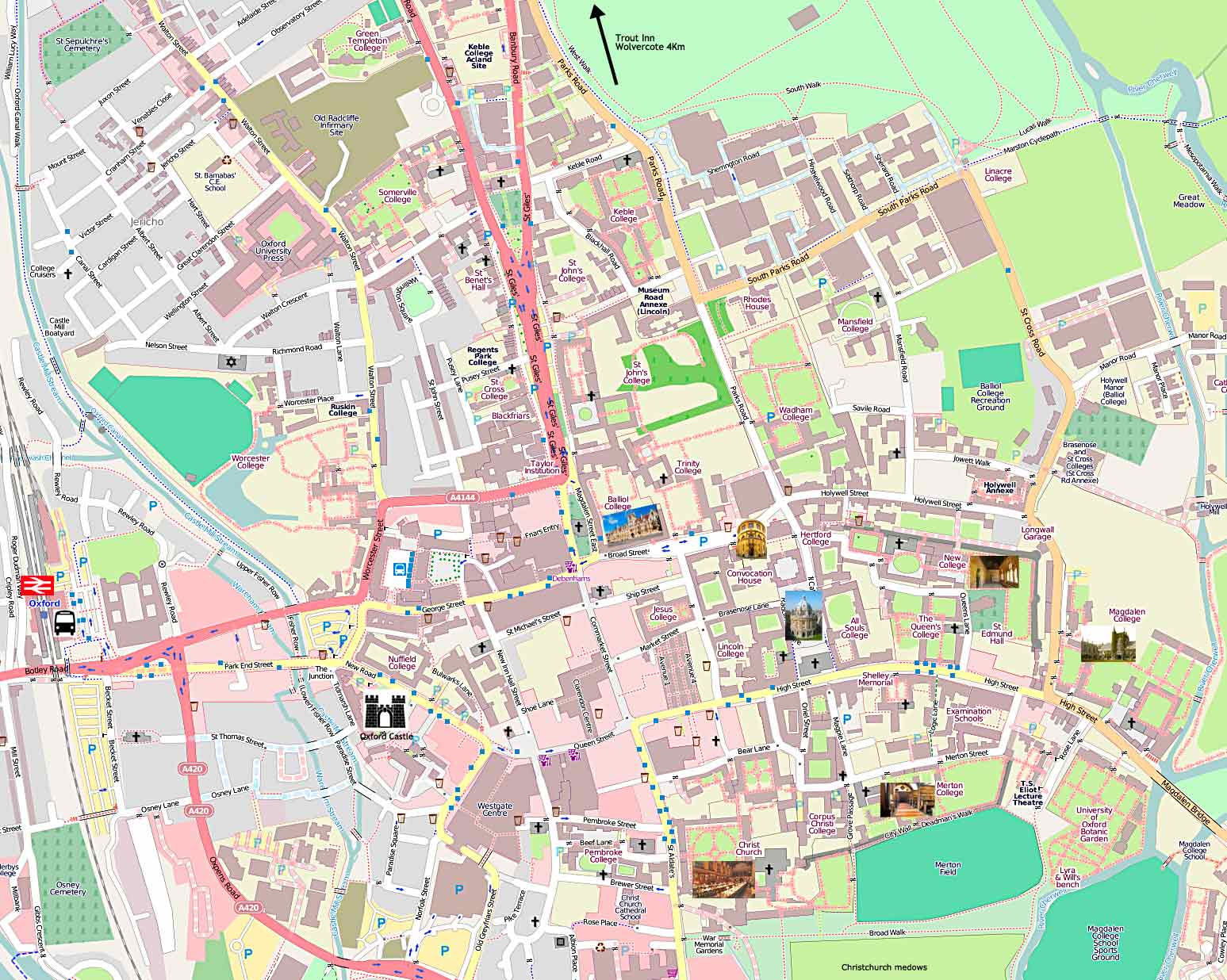 We arrived at Oxford station by train and took a taxi to our rented apartment in a quiet location behind the Oxford castle. From here it was a casual 10 min walk to Carfax and the heart of Oxford.
Almost immediately I noticed a number of substantial changes.
♦ How expensive the trains had become. The casual purchase of a day return to London by train was now £50/person, too expensive for us to go to London on an impulse, and we had to take the Oxford Tube to Victoria station at £13/pp return. The downside of the bus was the trip would now take nearly 2 hours instead of the 40min by train, considerably reducing the time we could spend in London.
♦ We could not drive through the centre of Oxford let alone park the car. This meant that to drive from one side of Oxford to the other, we had to take the long way around the ring road and then proceed to the centre along the few key access roads. But just driving in or out of Oxford from the centre along the access roads was itself a nightmare, and during peak hour, the traffic could be grid locked.
♦ Even with no cars, central Oxford was congested with buses, taxis and official vehicles. The days when we could drive and park in the centre and get out of Oxford with little traffic was just a fond memory.
♦ The old world feeling of Oxford’s main street had been severely eroded with the modernizing of many of the store front facades.
♦ The local supermarkets had a much more limited range of products than I was accustomed to in Sydney. Had to go to Waitrose in Abingdon, to access a large selection. 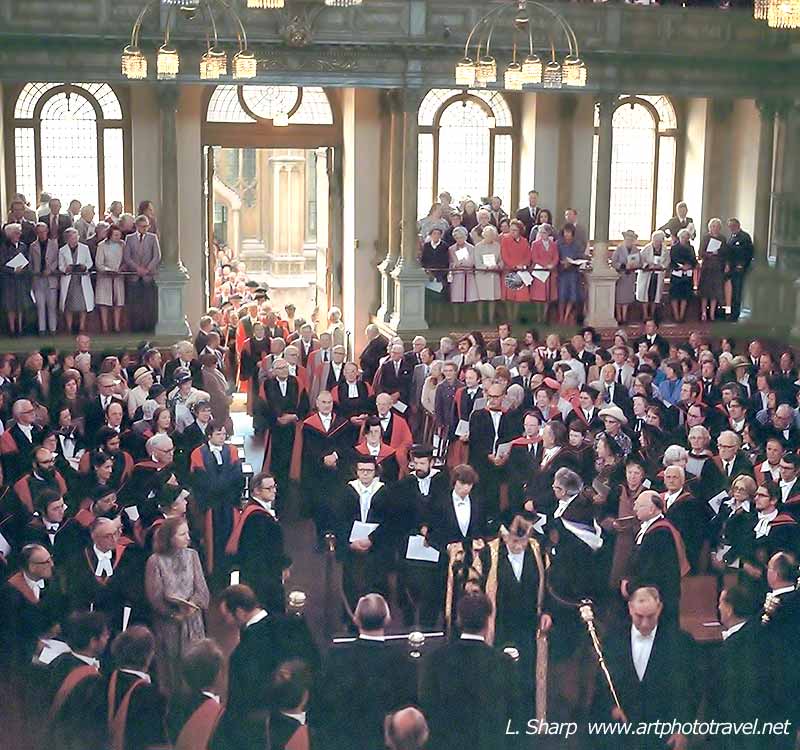 ♦ The Colleges, on the other hand, had altered little over the decades and still preserved their unique character. So we wandered the back streets around the colleges e.g.fig2, soaking up the atmosphere. I still loved the cloisters and chapel of New College, the 14th Century chapel and 13th Century library of Merton, the open pastures and great hall of Christchurch, the deer park and chapel of Magdalen, and the intimacy of Baliol college.
When I lived in Oxford I had an affinity with the whole college scene being part of Academia, and often wandered their grounds. My wife actually graduated from an Oxford college (the best education she ever got). We got invited to high table, and I even took part in Encaenia (the presentation of Honorary degrees to distinguished persons), sitting on the stage in the Sheldonian Theatre Fig3. It was a magical time. However, this time around, there was no connection. Time had made us outsiders, and that special bond did not materialize. 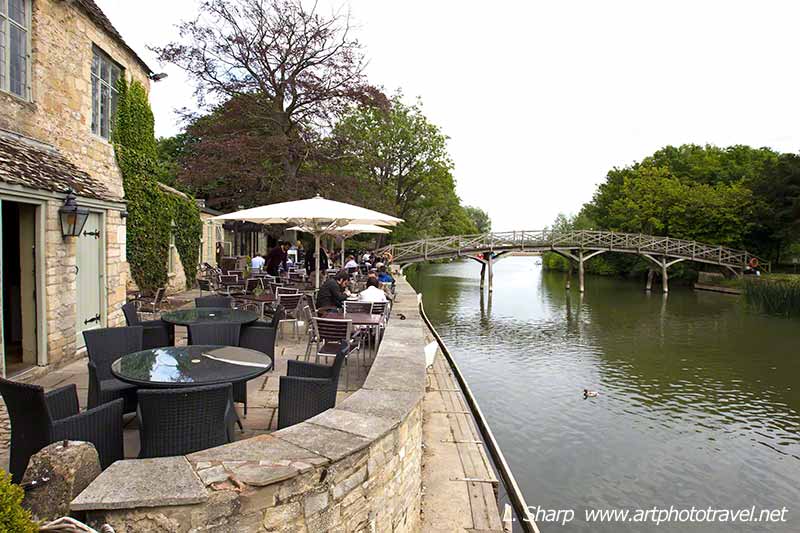 I remembered the Trout Inn in Wolvercote, as a beautiful, historic old world pub set in a picture post card grounds overlooking the river Thames. Ducks and I think  peacocks used to wander over the grass. I don’t remember the food being that good. Anyway I booked Lunch. The inn still looked the same from the outside, although the establishment had cleverly extended the building so there was a modern section with comfortable chairs just beyond the old 17th century wooden, paneled area. Actually after admiring the old parts we opted for the modern section. The food turned out to be very good, but rather on the expensive side. In fact, we returned a number of times during our vacation to enjoy a meal. I must admit I am quite partial to berry crumble. After lunch, we went outside to enjoy the terrace. Not as impressive as I remembered. I think the extension must have taken up some of the grounds.
I wondered what happened to the peacocks.

The Oxford Castle was once the Oxford prison. Now it harbors an exhibition and museum, and it is a hub for restaurants and the 4 star Malmaison hotel with its brasserie restaurant housed underground amongst the former prison cells. It still retains some of the features of the prison. The old cells are now private dining rooms, and the table settings suggest a elegant dining experience, but the dishes somehow miss. Cuisine: International. Food:average. Ambiance: Vgood.

A small popular restaurant with both inside and outside dining. Casual decor. Cuisine Italian. Food good to Vgood. Need to book.

A large establishment with the atmosphere of a casual American bar with side booths and subdued lighting. The establishment description is a chic hunting lodge style. Serves food throughout the day and service is efficient. Food good. I liked the steak and mushroom pies. 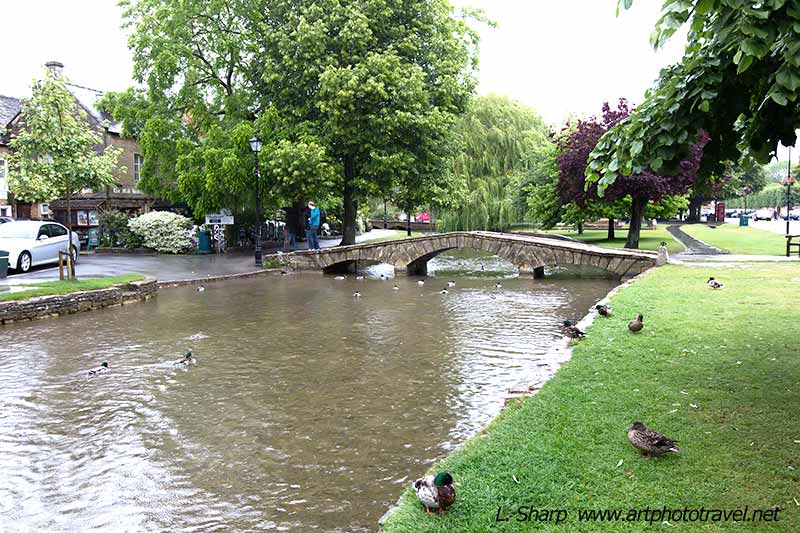 Highlights of the Cotswold Region:

When we lived in Abingdon, we often went out for day trips with our children through the Cotswold villages. I wondered what our present view would be of these villages, and whether they still lived up to our former expectations. So with a map of the area  we drove through as many villages as possible.  The villages that attracted our attention are listed below in no particular order.

is one of the most popular villages, with a pretty stream and village green at its centre. In my opinion, the large number of visitors has overwhelmed its original unpretentious village charm. To cater for the increase in attention, the village has introduced a number of  attractions, but in doing so  is becoming a theme park. There is a model railway, model village, bird land, motoring museum, Dragonfly Maze, etc… you get the picture.
Lunch at the Village restaurant: food: average; Ambiance English tea room. 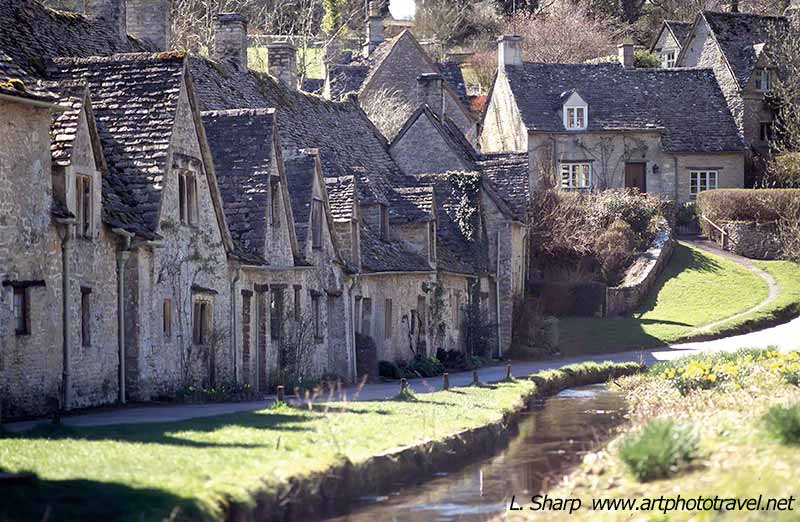 A pretty 17th century stone village, strung out along the minor road, B4425. Near the centre of the village is the small row of weavers’ cottages, known as Arlington Row, one of the jewels of the English country villages.
The Row presents best early or late in the day and particularly when there is snow on the ground and on the roofs.
Lunch at the Swan Hotel, Bibury; ambiance: 17th century coach house: elegant, historic.
Food: Vgood-excellent.

A pretty stone village where the cottages are spread out along the rim of an oval depression that used to be a quarry for building material. There is also the handsome church of St Peters that dates from Norman times. The closest Inn is in Great Barrington.

A Quite Picturesque stone village (no central shops) with a number of footbridges crossing the small river Eye. Other highlights are the old mill and 13th century St Mary’s church with its 19th century spire.

Its layout is actually more representative of a small town, with a long, wide main street, the High St. There are many charming  Cotswold stone houses located either side of this street, many exhibiting beautiful English front gardens. It is a pleasure just to stroll down this street. There is a small central shopping area and miniature village green. I felt this village has maintained its character and country town charm over the decades. It did not seem to be overwhelmed with visitors. For me, Broadway is one of the jewels of the Cotswold region. There is also the splendid Norman church of St_Eadburgha dating back to the 12 century, located about 1 mile along the Snowshill rd. The church  has a fascinating cemetery with extremely old tombstones. I think  the church would produce a great photograph with the lights on and  snow falling.

Has an attractive shopping area  along both sides of the main street. The buildings are constructed  of Cotswold stone and the small town has that  typical Cotswold feel.

A small, exquisite village with no centre. Has a traditional stone Inn, the Bakers Arms.  Has some pretty houses many being thatched cottages.

The lively medieval southern gateway town to Cotswolds. It has a wide main street with many historic local shops and cafes and inns dating from Tudor times. It is a place to explore the areas behind the main road where there are  intriguing narrow side lanes. Also, Burford has a lovely 15th century church, St John the baptist , whose adjoining cemetery  has tombstones dating from 1605.

Some pretty houses in this small hamlet.