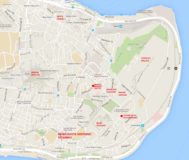 Our last visit to Istanbul in 1991 felt like we were amongst a few westerners exploring an exotic and distant land. This time, however, we were not alone. Mass-tourism had cast its spell transforming many of the monuments into endless queues. But we had a strategy. Buy the tickets online and queue at the entrance 20-30 minutes before the doors opened. Fortunately, we stayed at the White House hotel right in the heart of the historic centre with its bustling narrow winding streets and a short walk to most of the major highlights.

Both the Hagia Sophia the former Christian basilica, and the blue mosque were impressive by their scale and grandeur from the outside, particularly at dusk when they dominated the night sky and all their surroundings. Inside much less so, being cavernous and empty, with the jostle of visitors reducing the ambiance offered by the half-light of of an enormous chandelier and daylight streaming through high windows.
One outstanding highlight was dinner at the seven hills terrace restaurant at dusk. On one side, we had a panorama of the city overlooking the Marmara sea, and on the other side, a spectacular view of both the Hagia Sophia and Blue Mosque as the lights were turned on.

The Topkapi Palace had its history, and intricately carved architecture, but we remember it for its unbelievable treasure of gold and precious stones including an enormous 86 carat diamond and three uncut emeralds each weighing several kilos!! (the last seen in 1991 but closed this time).
We visited the undercover spice markets with its narrow rows of spice stalls and other trinkets, in the late afternoon when it is at its most lively and filled with local people. Nevertheless, I had the feeling that time has eroded its impact and changed its character as the demand for general and technical goods have overtaken those of food and spice.

Finally, we found a small gem entirely by chance. The Basilica Cistern, a subterranean water complex built in 532 by the Roman Emperor Justine. It was impressive with row after row of stone columns reflecting in the mirror like surface. And on  closer inspection one could just make out  in the dim yellow glow  ghostly carp swimming in the still water.