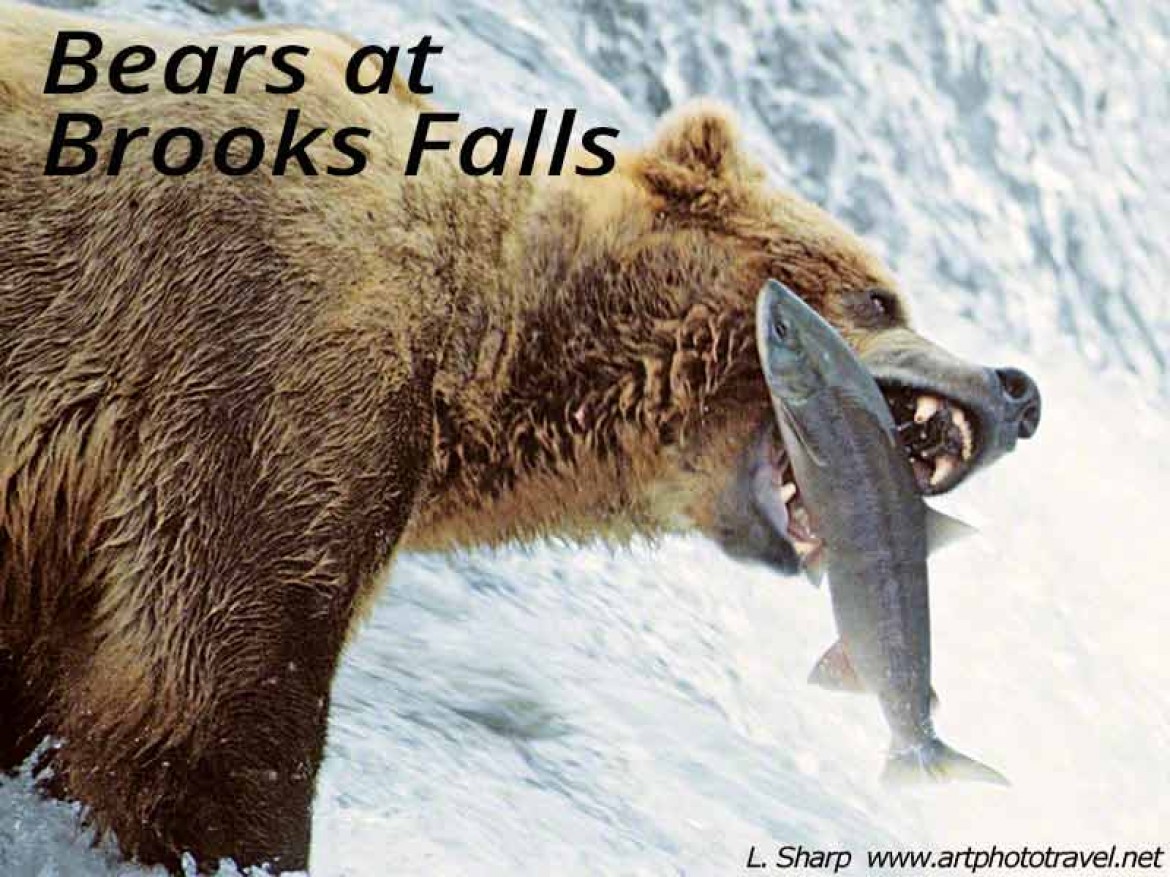 The bears of Brooks Falls Alaska

Watching bears fish for salmon at Brooks Falls is one of nature’s great spectacles.
Brooks Lodge was established in the early 1950’s for fishermen who were flown in by float-plane. At the time, bears were not often seen at the falls, as the fishermen and the local people drove them away.  The camp at Brooks was already part of the Katmai National Monument, established in 1918 to protect the geological features of the Valley of 1000 Smokes, Fig1.

The preserve boundaries were expanded a number of times and in 1980 the area was gazetted as the Katmai National Park. Since then, the bears

have been protected, and their numbers in the area have increased substantially, with more than 30 bears seen fishing together at Brooks Falls, during the peak salmon run.

Brooks Lodge and the US national parks Brooks campsite are located on Naknek Lake 25 minute flying time by float plane from King Salmon on the Katmai peninsula, Alaska. These are the only places where one can stay, with the lodge limiting the stay in July to 3 nights and the campsite to 7 nights. From the lodge it is a 1.5km walk to the viewing platform at the falls including the last 0.8 Km along a dense forest trail. From the campsite it is a 2.3 km walk, see Brooks Falls map, fig4. The falls viewing platform, caters for a maximum of 45 persons and during the peak season, viewing time may be rationed to 1 hour per visit. Visitors may then have to return to the beginning of the forest trail to put their name on a waiting list before returning to the falls platform although it appears one can wait at the Riffles platform overlooking the Brooks River until your number is called.

♦Maximize the time at Brooks Lodge by choosing an early flight into Brooks and a late flight out to Anchorage via King Salmon.
♦For the peak bear viewing season in July book a year in advance, see   http://www.katmailand.com/bear-viewing/reservations.html. For the campsite, online reservations start 10am EST on 5th January.
Recreation gov online booking here

Fig3 bear on beach near brooks

♦ You can camp just about anywhere in Katmai as long as you are at least 1.5 miles from Brooks Falls. (The other no camping area is the central portion of the meadows at Hallo Bay.) Since this is wilderness camping in an area frequented by bears you will need to be self sufficient, and practice proper camping techniques. Food and odorous items will need to be stored in bear resistant containers (available at the visitor center). – Katmai National Park and Preserve Authority.
♦Bears can be encountered at any time: in the lodge precinct, along the foreshores of the lake and streams, and along the  forest trail to the Brooks Falls platform.

♦At the Brooks Falls campsite you must take your own supplies and food except for cooking gas. However you can eat at Brooks Lodge restaurant and buy snacks there. Still check before you go in case there is a policy change.
♦The weather can be unpredictable, windy, rain, cold and hot.
♦A 500m/f4 lens on a full frame camera is a useful combination for bear portraits fig5. Use a mono-pod, as tripods will irritate people on a crowded platform and the rangers will move the people round so most get a share at the front. The platform is not crowded early in the morning and after 6pm when most day visitors are gone. There is ample light till at least 8pm if the weather is fine.

I have been twice to Brooks Lodge.  The first time in  late-July  for 3 nights at the lodge and 7 nights at the camp grounds, and the second time in mid-July  for 4 days (3 nights) at the lodge. If the weather is fine and the bears are fishing it is one of the great places in world and a once in a lifetime experience. To get that bear shot however will require persistence and may require a lot of walking back and forth through the forest.