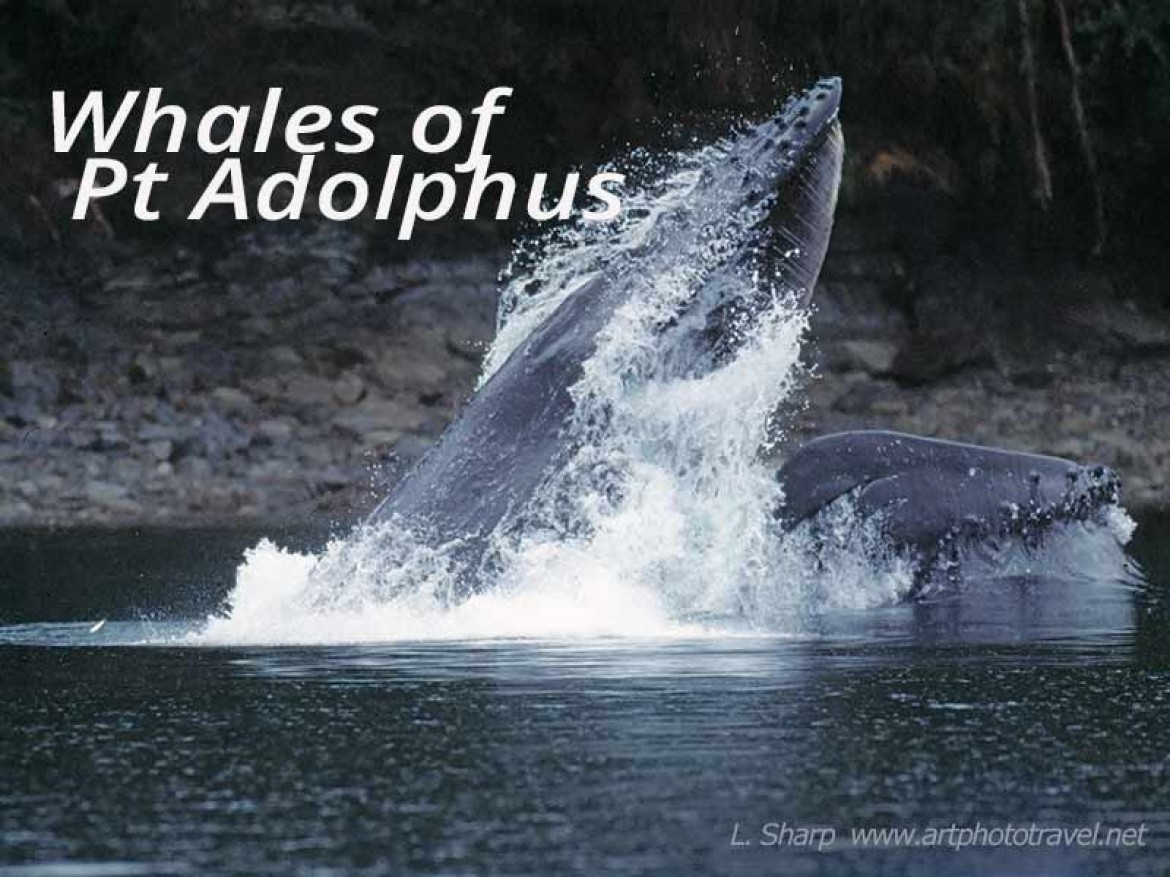 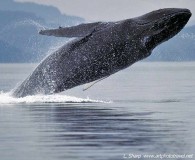 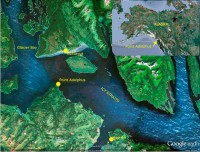 Three separate ocean currents converged just off-shore at Pt. Adolphus, forcing large schools of herring from the relative safety of deep water up to the surface, where they were corralled by Humpback whales. At the point of confluence, the fish concentration was so high that the water appeared to boil, and all the whales needed to do, was face upstream and let the current sweep the fish into their open mouths.
A little further along the coast, where conditions were less severe for the fish schools, the humpback whales used a ring of air bubbles to corral the school into a tight fish ball, whereupon the whales would swim up the vertical column scooping all into their gaping mouths.
What amazed me was how close to shore the humpbacks would bubble net feed. Sometimes within 10m of shore and right in front of houses and close to marinas. 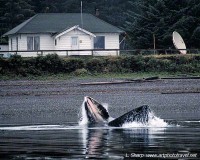 I observed a number of Killer whale pods which patrolled the Icy Straits. At one place close to the shoreline  south of Hoonah, I witnessed a killer whale that appeared to be teaching its young how to breach. The pup would make an attempt, and the adult would follow. This happened a few times in succession.

♦ Envoiromental regulation requires the boat should not approach closer than 100m, although it is acceptable for the whales themselves to approach the boat much closer. There was an incident, this time in Antarctica, when I saw bubbles surrounding our zodiac and closing the circle. A few seconds later this monster mouth came out of the water right besides us, too close to get any images. So it can happen! 100m is quite far for taking compelling images and requires a 500mm focal length telephoto. I found that often the charter boats stayed outside this distance as thecaptain could not determine the distance. I had to coax the captain closer using the focus of the camera to provide the correct distance.

♦ I found the chances of observing of bubble net feeding better and much more satisfying by chartering local fishing boat, rather than taking the standard whale watching boat trip. Bubble net feeding lasts only a few minutes and then the pod moves to another place following the fish schools which can be moving erratically. This makes following the action and photographing the event quite difficult.

♦ For me, this is a continuing project, as I have as yet not obtained an artistic  image.

♦The seas are generally calmer and the light softer in during the early morning from after sunrise to midday.

♦The humpbacks migrate to Alaska to feed during the summer June through early September. In the winter moths, the humpbacks return to Hawain waters to breed.