Castles, Stratford, and the Fat Duck.

Going to a Shakespearean play at the Royal Theater in Stratford upon Avon was a must-do experience. Only two adjacent, but expensive seats were available when I tried to book three months in advance. But it was well  worth the expense. The play was performed  inside an intimate theater (it actually holds 1000 spectators) with minimalist staging. The staging  was of little importance, as the brilliance of the production, was the ability of the actors to articulate Shakespeare in a way that made their performance understandable, and with a delivery that mimicked the song of modern English.
To complete the experience we stayed the night at the Shakespeare, a hotel housed inside three converted 17th century Tudor halls close to the town centre. The public lounge, tea rooms and restaurant still retained much of their true character. We just had to have high tea in the historic tea room.

Stratford has done exceptionally well in preserving the historic facade of the Tudor period, housing Macdonald’s restaurant and the supermarkets inside buildings with period shop fronts. It was a pleasure to stroll down the central area amongst historic buildings.
Had lunch at Restaurant 9 Church St; a small restaurant with a modern, chic decor and a neighborhood feel, located inside a historic 400 year old building. Food: Vgood-excellent. Service Vgood.
Overall, Stratford was a memorable experience. 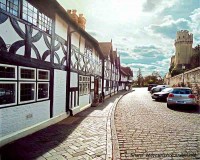 We often journeyed to Warwick Castle, to savour a piece of English history that was fast disappearing. A window into how the landed gentry lived inside a fairy-tale castle. A fortress with castellated towers and draw bridge, dungeons, and grand halls, magnificent paintings, and rows of mediaeval amour. And to top it all off, to hear the haunting call of peacocks as they postured across the manicured lawns.
But this time, the magic was gone, the Earl of Warwick had long since emigrated to West Australia, and his fine paintings had been removed from the walls. It was now a theme park managed by the Tussauds group of Madame Tussauds, London. There were staged mediaeval battles and archery competition, fast food cafeterias and a pageant playground for children. It certainly had become immensely popular, being promoted as England’s ultimate castle. But its raison d’etre had irrevocably changed for it was now a commercial venture, rather than a living example of British aristocracy. We wandered around the grounds marveling at all the medieval props, and staging, sighed at the sterile museum atmosphere of the interior displays, and when we left, had no desire to return.
Of course, the impressive silhouette of Warwick Castle still remains, and snuggled within its shadow is a magnificent row of Tudor houses butted up one against another along one side of Mill St. At the end of the street, was Mill Garden, a charming old world cottage with a half acre of informal garden. Very country English, with small winding walkways overlooking the Avon River that flowed past the castle walls and under a medieval bridge.

We drove to Windsor on a weekday to avoid the crush, and parked in the River St. car park, a short walking distance up High St. from the castle entrance.
The first thing I noticed, was the marked difference in the atmosphere that exists between a lived-in palace, and a national monument or museum that is only open for public display. The castle felt fresh and vibrant, and everywhere I had the  feeling  that this was the real thing.

As I approached the main building, I peered over a wall and saw a morning garden party held in spectacular surroundings.

Although there were a lot of visitors present inside the castle, the crowd did not distract from the wonder of the State apartments, and we took some 3-4 hours using an audio guide to stroll through the castle.
My highlights were: the grandeur of the state apartments which included paintings by Rubens and Van Dyke in the Kings drawing room, the opulence and sense of occasion of St George’s chapel with its gothic architecture draped with the standards of the Knights of the Garter, and the historic location of the tomb of Henry VIII.

The tower of London.

Ever since my youth, I have been fascinated by the Tower of London as the symbol of English Royal power, through its imposing structure, and through the terror that was meted out within its walls. Further, as the repository of the crown jewels many of whose precious stones came from other countries, the Tower of London was by association, an icon of British Empire.

Fig10. The Tower of London. www.commons.wikimedia.org/

So it was with these images in mind that we went to visit the tower of London, eager to soak up the atmosphere.
As we walked across Tower Bridge, I noticed the London skyline now dwarfs the silhouette of the Tower. Large trees along the foreshore mask the building, and a ferry wharf now softens the tower’s imposing and forbidding presence along the river.
Once within the castle walls its features became familiar, and we looked forward to the Beefeater guided tour. But when the tour was called we were besieged within a group of 120 persons. Just before, we entered the chapel of St Peter, I mentioned to the guide that when we visited 30 odd years ago we were in a group of 8. He looked a little offended at my comment, “you know” he replied “you are actually quite lucky; normally the group is over 250”. At the end of the tour, we went to see the crown jewels, but the queue was close to two hours, so we decided instead to have scones and clotted cream at the foreshore cafe.
In hindsight, the tour was actually quite entertaining and informative, but as for the symbols of British power and all that stuff, that was just the fantasy of an old man.

One of our travel objectives was to sample some of the world’s best restaurants that were not outrageously expensive. The Fat duck fell within this criteria as it only was terribly expensive at £220 per person with no wine. Booking was extremely difficult, as I had to redial 30 times to get through,  starting 2 seconds after the official opening at 9.00:00am GMT.
The restaurant is located in the beautiful, traditional village of Bray on Thames, inside a small, unassuming building that could easily be missed except for the small sign. Inside the decor was muted, but pleasant and welcoming. No frills, just food. The lunch tasting menu consisted of 14 courses plus bread, and took just under 4 hours to complete, notwithstanding the efficiency of the waiters which left little waiting between courses.
Looking down the menu, there were a number of unusual dishes that did not appeal. Everyone talks about the snail porridge, a dish that includes chopped snails and shredded fennel. To my surprise the best part of the dish turned out to be the snails, and that I could have left.
No, in large part my fascination with the dining experience was not that it was the finest meal I ever tasted, but with the magic of the culinary alchemy: the confusion of the senses, the surprise in taste and texture, the artistic presentation of each course, how the morsel of food unexpectedly disappeared, or changed in texture leaving intense flavors to linger on the palate, the use of sound and aromas to alter the perception of texture and taste. And the “piece de resistance” was the cup of hot-cold tea. Yes, a single cup of tea that on the palate was both hot on the right and cold on the left at the same time.
So the Fat Duck certainly exceeded expectation as a unique culinary experience, as a journey of discovery, rather than the experience of savouring the best ever food.
By the way, it is surprising that, of the four Michelin 3 star restaurants in all of England, two of them reside in the village of Bray.