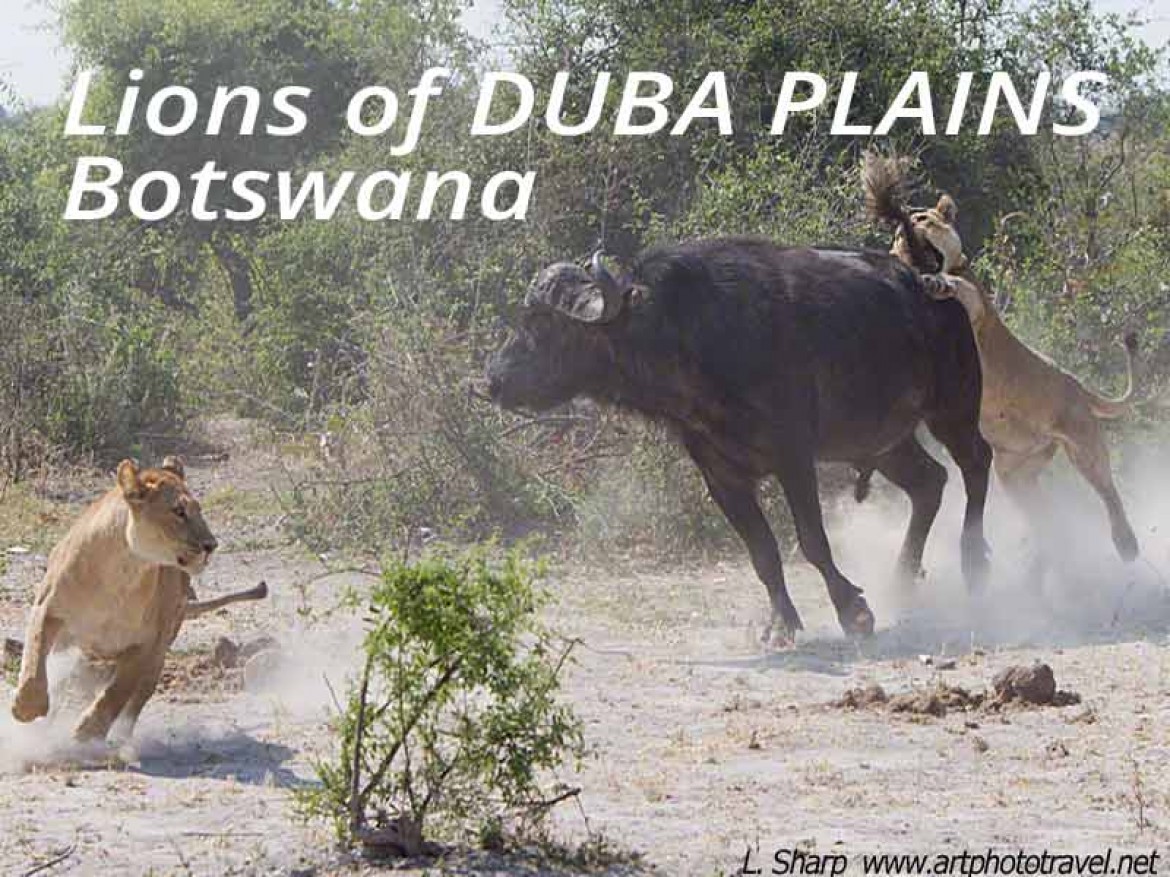 Duba plains is renown for dramatic clashes between lions and buffalo. Relentless enemies of equal prowess forces hunting to occur during the day. Duba Plains itself is a wildlife reserve of 35,000 hectares.  It is  located on an island at the northern confluence of the Okovango Delta, some 45 minutes flying time by charter plane from Maun,see Duba plains location map, fig1.  The landscape has been shaped by two major factors. The annual flooding of the Okovango Delta inundating part of the island and depositing silt and nutrients and the presence of termite nests which allow the colonization of the wetlands by shrubs and trees.

This has produced a cluster of low lying islands interspersed with shallow channels and open grasslands fig2. The habitat supports small herds of red lechwe, tsessebe, warthogs, and a scattering of other animals including baboon, buffalo fig3, hippo, bat eared fox, aardvark, ostrich, giraffe and a few leopard. In winter herds of migrating elephant traverse the reserve.

But the major attraction of Duba Plains is the interaction between the resident herd of 1000 Cape buffalo and the two prides of lions ; the Tsaro pride of 9 lions on the main island and the Skimmer Pride of 9 lions on Paradise Island. These two areas are separated by a water channel that is impassable to 4 wheel vehicles. Because of the danger associated with hunting buffalo most of the lion-buffalo interaction occurs during the day. Studies by Rawdon and Roche (2006) show both prides hunt mainly buffalo during August through October with a peak success rate for the Skimmer pride of 15 kills in September. The number for the Tsaro pride (35 for September) has fallen dramatically since the paper was published due in part to the death of two exceptional males known as the Duba Boys, and in part due to the practise of infanticide where the female lions kill the young of the other adults. In the last 5 years 350 cubs have been born to the Tsaro pride of which only three have survived. Even with the appearance of four new cubs, see fig5, the survival of the Tsaro pride is uncertain according to the local conservation officer. Nevertheless in August 2010, the pride although fragmented was a formidable force with a success rate of 1 kill per 6 days, fig6.

The camp is built on an island shaded by large Ebony, Fig and Garcinia trees, with its 6 well appointed “Out of Africa” style tents fig4, overlooking a shallow swamp, and channel inhabited by hippo and elephant. The backside of the camp leads onto sage bush plains and the local airstrip. There is a central lounge-dining area, and an outdoor deck with wood fire suitable for afternoon teas and before dinner drinks. The food is good and ample. The organization is friendly and very professional, and will do what is necessary to ensure fulfilling your experience. If this means sending out a picnic lunch so you can stay out in the field, or stripping the engine of a vehicle through the night so it will be available the next morning, then it will be done, see fig7.

♦ 6am wake up call.
♦ Escorted to breakfast 6.30am.
♦ 4 hour morning game drive, (after crossing the channel to the main island, fig9),
with morning tea in the bush retuning around 11 am-noon for morning snacks.

♦ Although Duba Plains has a large concession it is only permitted to have 3 safari 9 seater vehicles.
♦ it is imperative to book one of these vehicles for sole use if you want to photograph lion-buffalo interaction, as this allows you to have your own day schedule and stay out to follow the lions. This will leave two vehicles to cater for the remaining 10 or so guests. As the average safari is 2-3 days one or both of these vehicles need to return to camp at midday to cater for the guest changeover.
♦ Booking a private vehicle for an extended stay may need to be made 1.5 to 2 years in advance.

car bogged but repaired by morning

♦ The lion cubs and lion-buffalo interaction were taken with 500mm and 70-200mm lens respectively with a Canon 1d mk4 camera.
♦ If the buffalo stay on the main island, the Tsaro pride will have a successful kill about 1 in 4-6 days (August-October). If the buffalo cross the channel to Paradise Island, cars (August 2010) cannot follow and the buffalo may not return for some days or even stay on Paradise for more than a week. This inability to follow the buffalo herd constitutes a major risk to witnessing lion-buffalo interaction at Duba Plains.

♦ In August 2010 we were told a bridge was planned to be built by 2014 to allow vehicles to cross the channel to Paradise Island. With the bridge fully functional, the probability of observing lion buffalo interaction during the peak season should be one kill per few days as extrapolated from Rawdon and Roche (2006).

♦ The rains occur from February to April, but the flooding of the Okovango does not occur until June during the start of the dry season (winter), when much of Duba Plains is inundated and driving becomes difficult.  In July the weather clears, but is quite cold particularly early in the morning requiring warm clothing. During August the temperature rises through the low 30’s0C becoming uncomfortably hot in September.  Mosquitoes start to reappear as the temperature warms.

♦ We were at Duba Plains from the 19-29th August, when the flood waters were receding, the skies were clear, the mornings and evenings cool, while the mid-day temperature moved through the low 30’s 0C. About half way through our stay, mosquitoes started to appear in force at sunset while we were out on safari but not at the camp.