Our visit to Stratford on Avon. 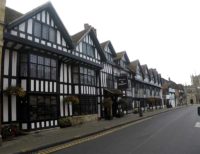 We wanted to see a Shakespeare play but the season was over and all we could book was Volpone. Volpone? Never heard of it. Still, any play in the Royal Shakespeare Playhouse would be an experience. It developed that Volpone was a dark comedy about greed and corruption recast into the 21 century and written by Ben Johnson, one of Shakespeare’s contemporaries. The plot was a bit suss, but the acting was superb. The central character played by Henry Goodman was a tour de force of acting moving easily from one characterization to another. It was a major, but pleasant surprise.
We again stayed at the Mercure hotel, a structure composed by combining three 17th century Tudor buildings, located close to the heart of Stratford. Its lunch restaurant was good, but the breakfast cook needs to go back to cooking school. Finally, the ambiance of this historic Tudor town still can be felt, although many new tourist shops are trying to bury it.