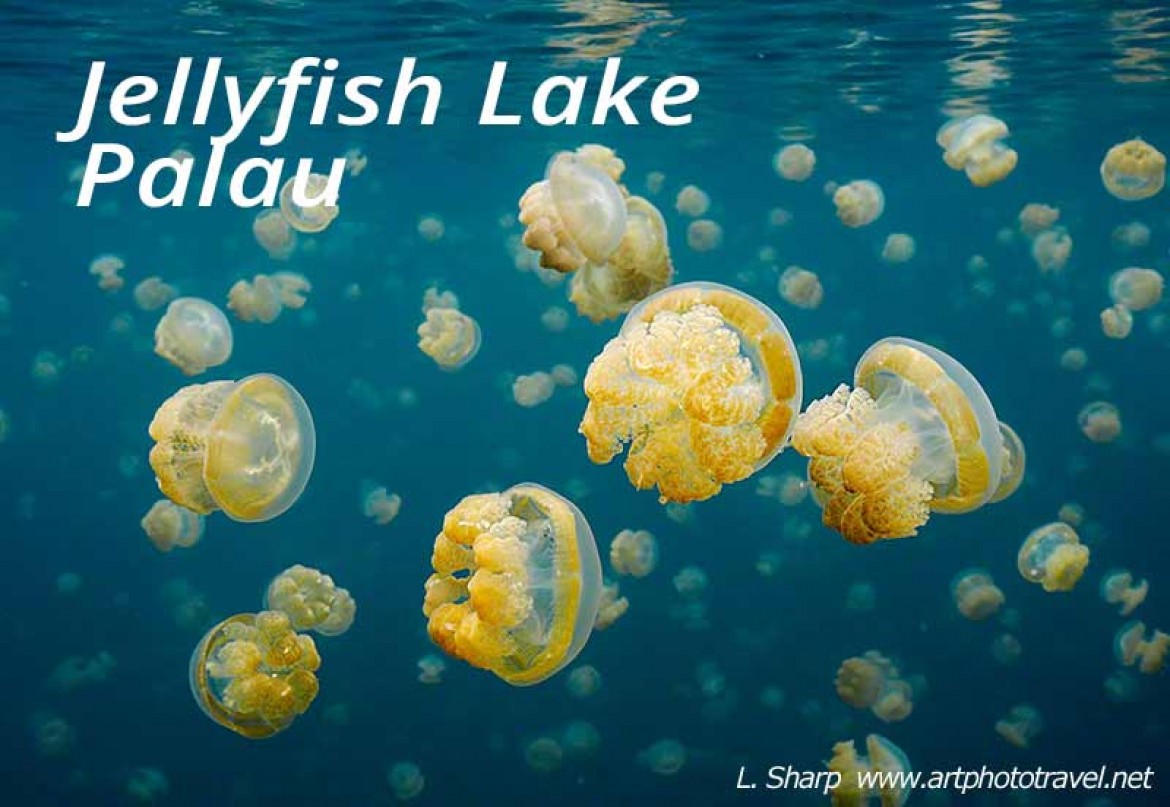 Swimming with the jellyfish in Jellyfish Lake Palau

Swimming amongst millions of stingless jellyfish in Palau’s landlocked Jellyfish Lake is an amazing experience and a must-do-activity.

Palau has five landlocked saltwater lakes each with its own unique species of jelly fish, but visitors are only allowed to snorkel in Jellyfish Lake located on the southern island of Eil Malk, see Jellyfish Lake map Fig1. Here, the dominant species is the Golden jellyfish whose sting is mild and often undetectable to humans, as the stingers rarely penetrate skin.
It is estimated there are 15 million jellyfish in this lake which migrate to the surface to follow the sun during the day and then return to the depths at night. This dramatic migration is an outcome of the symbiotic relationship between the jellies and a microscopic algae carried within their tissues.
The algae need to feed on the nutrient rich layer which occurs at depths below 15m, and to return to the surface to photosynthesize a sugar to support their jellyfish host.
The upper layer is oxygenated and safe for humans, but the bottom anoxic layer containing hydrogen sulphide and phosphates is toxic to humans. Consequently scuba diving is not permitted.

♦The Golden Jellyfish have a bell the size of a large grapefruit that feels smooth and not slimy to the touch.
♦The visibility near the surface is limited by a greenish turbidity in the water and is normally about 5m, but when I was there it was considerably better, see fig4.
♦Underwater flash is important in photographing the jellyfish to make them stand out from the greenish turbidity.
♦Best time to visit is during November to April, when there is less rain.
♦Access to the lake is by 45 minute boat ride from the capital Koror, followed by a 15 minute hike up and over a rocky limestone path to a small platform, over the water. In parts, the path has fixed rope to help visitors over the steep sections.
♦Tourists are required to purchase a 10 day pass to swim in Jellyfish Lake, which is normally included by the tour operator in the cost of the excursion.
♦Jellyfish Lake is Palau’s leading destination, so there are likely to be other swimmers present. This should not distract from the experience of snorkeling with the jellyfish as there are millions of them over a large area.
♦There are a number of tour operators in Korror that organise snorkelling with the jellyfish, see http://www.visit-palau.com.
♦We went with Eclipse and Safari tours, Palau, http://http://www.palau-divensail.com/, who have 6 day charter tours on their sail boat Eclipse as well as diving tours on their converted live-on board trawler. They were welcoming and very helpful to us as inexperienced certified divers.